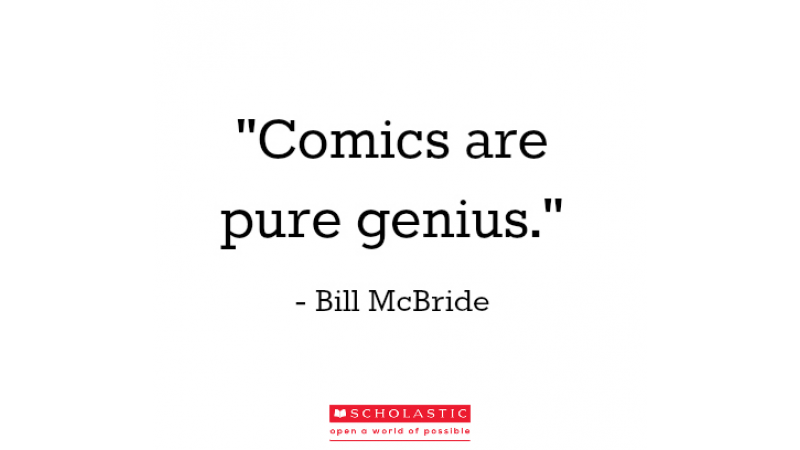 Bill McBride: My Life as a Reader Bill McBride, Ph.D., is a well-known international speaker and educator. He is presently Author-in-Residence for Houghton Mifflin Harcourt. McBride is best known for his heartwarming novel Entertaining an Elephant, Carrying a Load of Feathers, Building Literacy in Social Studies, Reading Toolkits for Social Studies, and If They Can Argue Well, They Can Write Well. McBride recently wrote an essay for our Open a World of Possible initiative, reflecting upon his early experiences as a reader, which we've repurposed here. The full version is also available in our new Open a World of Possible book, which you can download for free here.

My first ride was emerald green with lots of chrome that shimmered in the hot Southern sun. It had dual front headlights and an angry hornet of a horn that got people’s attention. It was pretty cool until my Dad attached the oversized basket to the front bars, giving my Schwinn Speedster the look of a Corvette with a luggage rack. But with over 100 homes on my afternoon paper route, the bulky basket was a necessity.

Each afternoon, a group of us 12-year-old paperboys congregated down at Mrs. Wiltshire’s General Store, staring through the Merita Bread screen door, watching for the Richmond Times Dispatch truck to pull over across the street and deposit bound loads of newspapers on the ground. Mrs. Wiltshire didn’t mind us hanging out in her store. We paced the old wooden floors and always bought cookies and candy to last us through our arduous routes. Perhaps our favorite treat was to reach our sweaty little hands into the ice cold water circulating in the long Pepsi cooler, pulling out sodas, searching for our favorite. A 16-ounce Pepsi could get me through my entire route in the suburbs under construction outside Richmond.

In the 1960s aluminum cans didn’t exist—only bottles. Construction sites were often littered with empty soda pop bottles. Cleaned bottles could be turned into the grocery store for two cents, so as I threw out each rolled newspaper, I tried to replace it with a bottle. I’d spend Friday night cleaning my loot with the garden hose and on Saturday morning take them to Colonial Supermarket to reap my profits.

As soon as the cashier at Colonial handed me my coins, I headed straight to Ben Franklin—a Five and Dime. I went there for three reasons. One—it was air-conditioned. Two—I could get a hot dog, a bag of chips, and a coke made from syrup and carbonated water for less than a dollar. And three—they had a comic book stand.

Now comics are pure genius. Each one always ends in a cliffhanger, so you have to go back around the first of the next month to find out if Spiderman fell to his death, or the Fantastic Four had been reduced to the Not-So-Terrific Three. Because only two or three copies of the next sequel would suddenly appear in the rack, you had to go early and often. If some other kid got your favorite, you lived a month of torture. Is he dead? Were they evaporated?

As soon as I got to the comic book rack, I spotted the newest Flash (my favorite). Then I’d stand there and read as many other comics as I could before my legs gave way. You see, I was cheap. These things cost 12 cents—that was six bottles! I was only going to buy one, so I had to read, and remember, all the other stories of Superman, Batman, Aquaman, Superwoman, Green Lantern, and so on.

On one particular Saturday, I noticed a Classic Comic with a country boy on the cover, a white fence and paint brush, and a kite. Having flown kites, I was curious and reached for it. Uh-oh! It was thicker, had more words, and worst of all, cost 7. bottles, i.e., 15 cents! But I started reading and soon was transported to Hannibal, Missouri, and the world of Tom Sawyer.

That journey would take me, a decade later, to the University of North Carolina at Chapel Hill where I majored in Literature. Of all my purchases made from that comic book rack, I have only one Flash left, but I still have every Classic Comic I ever bought—from Tom Sawyer to The Iliad.