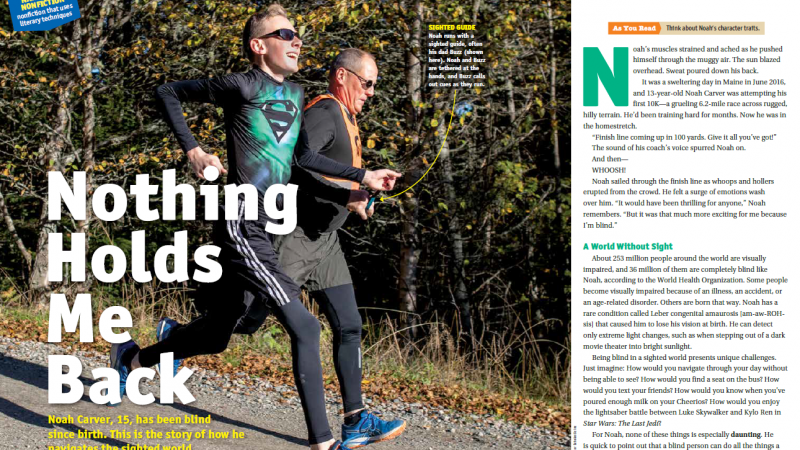 With the year coming to an end, we took a moment to catch up with the editors of Scholastic Classroom Magazines to ask them about the most inspiring, motivated, and bold students they met this year. It was a difficult decision, but each of the editors nominated outstanding students who brought their ideas to life and pursued their dreams—inspiring their peers, communities, and us along the way.

Check out the full round-up of the “10 coolest kids we met in 2018,” below, and read their real-life stories as featured in the pages of our classroom magazines.

Last year, Noah became the youngest person ever to have walked across the United States! Each day, Noah and his dad walked about 17 miles to raise money for a cure for type 1 diabetes, which Noah himself has. Noah’s March took one year and he has raised more than $30,000 total. Read the full article in Scholastic News Edition 5/6, here.

After being born with a rare condition called Leber congenital amaurosis that caused him to lose his vision at birth, Noah was determined to be a regular kid. Today, he is an advocate for the blind community and started a petition for movie studios to provide audio descriptions for every movie they produce and movie theaters to have the proper technology for the visually impaired. Read the full article in Scholastic Scope, here.

Mari, also known as Little Miss Flint, sent a letter to President Barack Obama when her city’s tap water was found to be polluted with lead in 2014—he not only responded, he visited to see the situation for himself. Since then, she has continued to fight for clean water, explaining, “Never give up, even if people don’t take you seriously at first. Keep on fighting. You can change the world as a kid, just like I am doing.” Read the full article in Storyworks, here. Hailey was born with three fingers missing from her right hand, but she didn’t let that slow her down. College students made her a 3-D printed artificial hand, which she used to help accomplish her goal—she threw the first pitch at all 30 Major League Baseball stadiums! “I want other kids to see that if I can do this, they can reach for their goals too,” says Hailey. Read the full article in Scholastic News Edition 3, here.

Two years ago, Shu Shu won an award that recognizes kids who are trying to help people in their community. With her winnings, Shu Shu wanted to share her love of reading so she bought supplies to build a free library in her front yard called Shu Shu’s Fun Learning Depot and Community Library. Today, she owns more than 700 books and organizes monthly activities for kids at her local learning center. Read the full article in Scholastic News Edition 4, here.

THE BOLD ONE – Soha Manzoor, 16, California

In the November issue of Scholastic Action magazine, Soha shared why she chooses to wear a head scarf to honor her Muslim religion. “I decided to start wearing a hijab in sixth grade,” she explains. “Wearing a hijab is a choice any woman can make for herself. For me, it was a way to show the world that I’m Muslim and proud.” Read the full article in Scholastic Action, here. Last fall, Jeancarlos watched as Hurricane Maria swept through his hometown, Orocovis, Puerto Rico, destroying everything in its path and shutting off all electricity, meaning that the town didn’t have access to clean running water. Taking matters into his own hands, Jeancarlos successfully created his own water purification system using chlorine, gravel, sand, and charcoal. Today, he’s teaching his community how to build his filter to prepare for future storms. Read the full article in Choices, here.

Originally from a small city in northern Syria, Yasameen fled the country in 2012 with her family to escape food shortages and bands of thieves. After a long journey, including three years in an Iraq refugee camp, she now lives in Houston, Texas where she is making new friends and attending high school. She says, “Being able to study again means that my siblings and I have a chance to [make something of ourselves].” Read the full article in The New York Times Upfront, here.

After spending a year planning and collecting recycled materials, Luke built a tiny 55-square-foot home in his backyard for less than $1,500! With the help of his friend and family, he spent nearly every weekend building the house, which features a kitchen a sleeping loft, and full electricity. Read the full article in Scholastic MATH, here.

When he was in seventh grade, Jaylen discovered that he has learning difference called dyslexia, which causes him to see letters upside down or backward when he’s reading. After hard work finding new learning strategies, Jaylen now is a junior in high school with a 4.0 GPA and even gave a speech that he wrote at his school’s public speaking event. Read the full article in Scholastic Action, here.