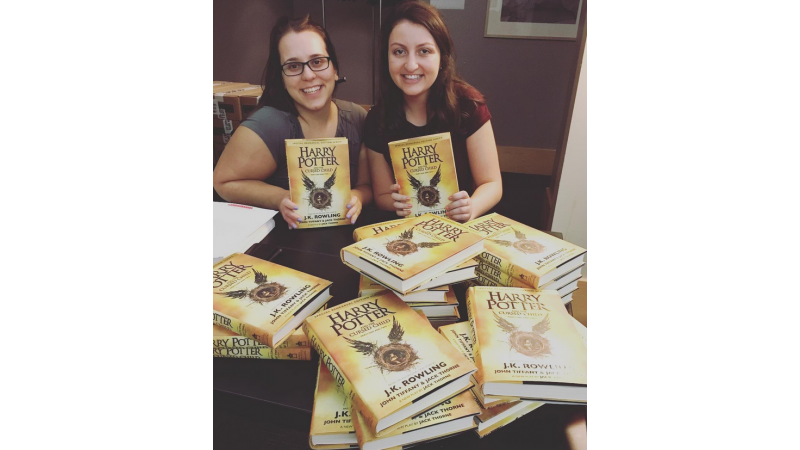 What a year it's been for Harry Potter fans! As 2016 wraps up, let’s take a look back at 10 amazing moments Harry fans got to experience this year. What was your favorite?

10. New writing from J.K. Rowling on Pottermore. By revealing lots of new details about the history of magic in the Harry Potter world (have you been sorted into your Ilvermorny house yet?), Pottermore, the online home of all things Harry Potter, kept our interest piqued all year long.

9. The Harry Potter Magical Creatures Coloring Book. Fans of all ages love to express their creativity with our Harry Potter coloring books!

Repost @barnesandnoble ・・・ "You didn’t know you wanted to color in the Dursleys’ living room until I said that, did you? That’s the beauty of the 'Harry Potter Magical Places and Characters Coloring Book' - it takes you beyond the kinds of locales that might occur to a mere Muggle, and into far more outlandish and surprising locations (like the ceiling of the Great Hall at #Hogwarts). Plus, there are tons of designs inspired by the characters themselves. Accio, colored pencils!” Learn more about the vibrant world of #HarryPotter coloring books: http://www.barnesandnoble.com/blog/the-magic-of-harry-potter-coloring-books/

A photo posted by @scholasticinc on

8. A Harry Potter #ReadtheMagic read-along. In the spring, in preparation for the release of the 8th Harry Potter story, Scholastic launched a gif campaign and a Twitter read-aloud of all 7 books in the series. We had so much fun re-reading the books and sharing the quotes we loved!

7. A Hamilton/Harry Potter crossover. This year, another pop culture phenomenon that also begins with the letter H crossed over into the Harry Potter world! Lin-Manuel Miranda, creator of the smash hit Hamilton, shared his love of Harry, and when we sent him a Harry Potter boxed set, he tweeted his thanks. Day made!

When you tweet about your dad selling your Harry Potter books but @Scholastic follows you on Twitter.
Thank you! pic.twitter.com/An8ILQWPoG

6. The Harry Potter Celebration at Universal Studios in Orlando. It’s the best weekend of the year to be a Potterhead. The Scholastic booth in the Expo center was THE place to be, as fans signed the Muggle Wall (even Katie Leung, who plays Cho Chang in the films, signed!) to express what Harry Potter means to them, and colored in our Harry Potter Coloring Wall. Scholastic gave out posters featuring artwork from the new illustrated edition of Harry Potter and the Sorcerer's Stone, bookmarks, and coloring sheets. And we got to meet our pen pals!

Our Muggle Wall is almost out of space! What does #harrypotter mean to you? #hpcelebration

A video posted by @scholasticinc on

5. The cover reveal of the illustrated edition of Harry Potter and the Chamber of Secrets and its release in October. With gorgeous artwork by Jim Kay, this is the must-gift book of the season! (And we loved the #UnlockLockheart campaign, too.)

4. Cast photos: Harry, Ginny, and Albus Potter and the Granger-Weasleys and Malfoys. These reveals of the new cast from the London stage production of "Harry Potter and the Cursed Child Parts 1 and 2" made every fan feel the magic!

(We even showed you how to pull one off!)

2. Fantastic Beasts and Where to Find Them! Set in the same magical world as Harry Potter, Fantastic Beasts follows the tale of Newt Scamander as he arrives in New York City with a suitcase full of magical creatures. The original screenplay by J.K. Rowling (her screenwriting debut!) and the film from Warner Bros. are chock-full of the magic we know and love…and lots of surprises! (Plus, there’s more Fantastic Beasts excitement to come in 2017 as the new edition is released!) We helped reveal the trailer in April and counted down to the film and screenplay release in November.

1. Harry Potter and the Cursed Child Parts 1 and 2. How many of us dreamed of an eighth Harry Potter story? *raises hands* Both the announcement of the script book (based on an original new story by J.K. Rowling, Jack Thorne, and John Tiffany) in February and its July release stand out as the top Harry moments of the year. With midnight parties (just like last time around!), passionate reader reactions, and impressive numbers, it was surely an experience we’ll never forget.

It's a great day at Scholastic - employees are getting a new copy of Harry Potter and the Cursed Child Parts One and Two! Have you devoured your copy yet? #cursedchild #hpscriptbook #harrypotter

A photo posted by @scholasticinc on

Harry Potter fans, what was YOUR favorite moment of the year?