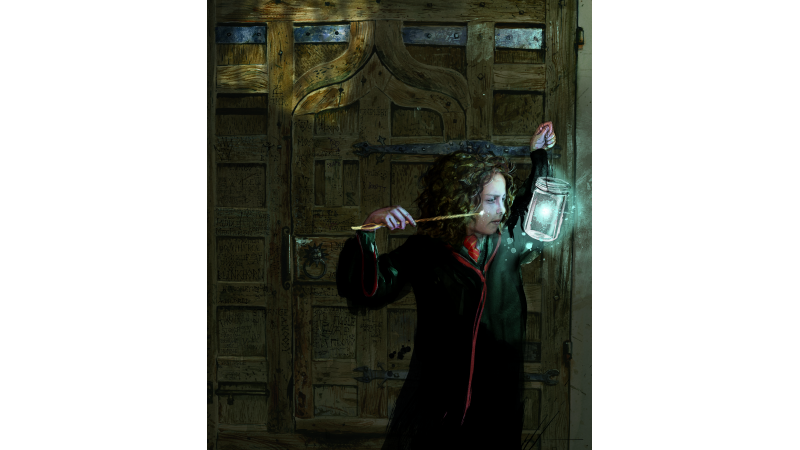 #WCW: The ladies of Harry Potter March is Women's History Month, and to celebrate, I'm sharing some of my favorite female characters from children's literature each week!

I couldn't possibly make a list like this without including mention of the female cast of the Harry Potter series.

Now, every book lover knows Hermione Granger is queen. But this week, I wanted to spotlight some of the many other strong, smart, brave women from the Harry Potter series who don't get quite as much love as the brightest witch of her age.

Molly Weasley might just be the best fictional mom ever. She treats Harry and Hermione with just as much love as she does her own children, she puts up with Fred and George (I mean come on), and she is fiercely loyal and protective (could anyone ever forget her amazing line to Bellatrix, "NOT MY DAUGHTER, YOU. . ."). In case you need more convincing, I highly recommend you check out this Tumblr post that offers some alternative titles for the Harry Potter series if Molly Weasley had been the title character.

While we're talking about the Weasleys, let's add Ginny! Ginny is fierce — she has a crazy impressive Bat-Bogey Hex, she's beter than most of the Dumbledore's Army boys at defensive spells, and she stands up to her brothers. Not to mention that she's insanely loyal! Remember that time that Harry (whom she'd secretly loved FOREVER) asked her to the Yule Ball but she turned him down because NEVILLE had already asked her?! Or how she always stands up for Luna? Talk about a true Gryffindor. Speaking of Gryffindors, let's add Minerva McGonagall to the list. McGonagall is brutally honest and never afraid to tell it like it is, whether she's awarding house points to Gryffindor for "sheer, dumb luck" or sassing Dolores Umbridge. She's a staunch defender of her students who is never more lovable than in the few moments where we can see her warm and fuzzy inside. Or, you know, when she's defending Hogwarts against great evil.

The Harry Potter series is chock full of women who don't care what anyone else thinks about them, but Luna is probably the best example. She showed young girls everywhere that it's okay to be different or smart or funny or quirky — the most important thing is that you are true to yourself. This quote from J.K. Rowling is one of my favorites about Luna's character:

"She's slightly out-of-step in many ways, but she's the anti-Hermione. Hermoine's so logical and inflexible in so many ways and Luna is likely to believe 10 impossible things before breakfast."

Nymphadora Tonks (but don't call her Nymphadora) doesn't get as much page time as some of the other beloved characters, but is no less important. She has amazing color-changing hair — she is a metamorphmagus, after all — and has a swoon-worthy romance with everyone's favorite werewolf, Remus Lupin. She's an auror who trained under Mad-Eye Moody and one of the first people from the Ministry of Magic to join Harry in the Order of the Phoenix. Her death (and Lupin's) during the Battle of Hogwarts was one of the hardest for me to recover from when I first read Harry Potter and the Deathly Hallows.