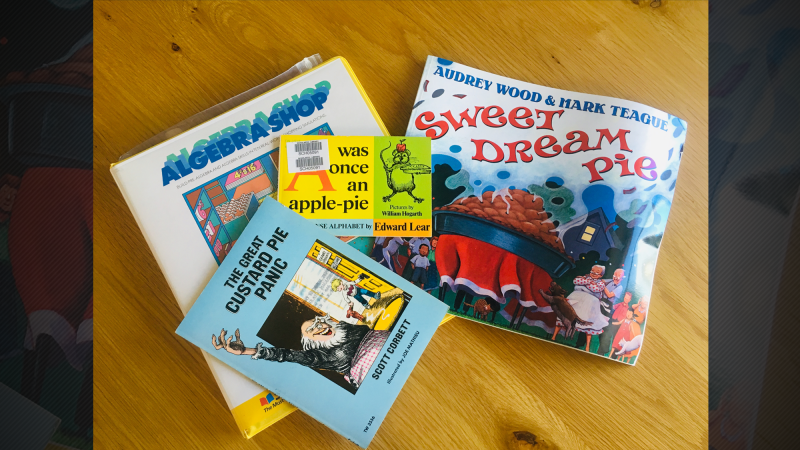 As this week’s Throwback Thursday falls on 3/14, I had to observe the occasion! National Pi Day celebrates the fact that the date 3/14 matches the first few digits of the mathematical constant, pi (π). People loved this fun coincidence so much that the U.S. House of Representatives passed a resolution in 2009, officially designating March 14th as National Pi Day! And what better way to celebrate math than with dessert?

So, I went to the Scholastic Archives in search for all things math and pie. The Archive of wonder did not disappoint—I found some great content from our Classroom Magazines, activity guides, and books! There were quite a few math magazine pieces honoring this special day, of course. Grab a slice of pie and check out my findings below:

A was once an apple-pie: A Nonsense Alphabet by Edward Lear, pictures by William Hogarth, 1969 “This time I really have you in my power!” Dr. Merlin cries
Nick and his dog Bert have walked right into Dr. Merlin’s trap! The Pie Shop: In this shop, customers order fractions of whole pies. The store has only three different fractional pieces of pies in stock. The student must choose one of those pieces and cut a fractional portion of that piece to fill the customer’s order.

This kit also comes with an activity disk! The enormous mixing bowl began to glow. A thick, sweet syrup bubbled up and oozed down the sides. The Brindles poured the filling into the giant pie pan, then wrestled the top crust into place. Special thanks to Gina Asprocolas, and Scholastic Librarians Deimosa Webber-Bey and Chelsea Fritz for their help with this series!