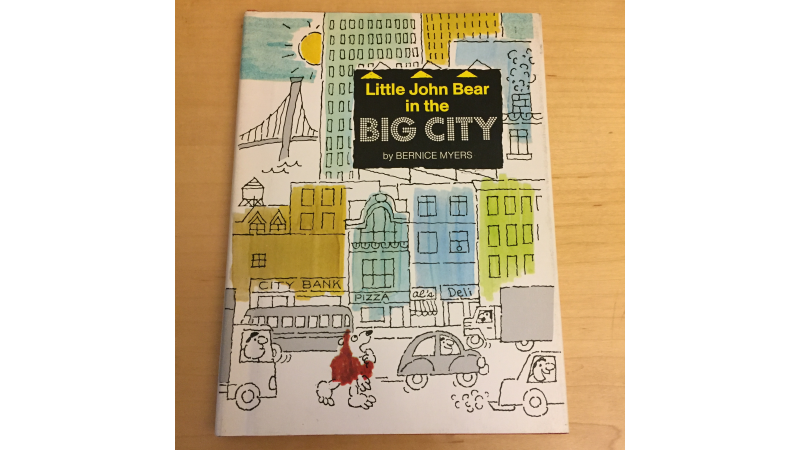 One of Scholastic's first imprints was Four Winds Press. You can tell when you reach the collection of Four Winds Press books in our Archives when suddenly, all the books are hardcovers. Here's what 1979's Scholastic: A Publishing Adventure has to say about the founding of the imprint:

A strong inducement to an author, especially and established author, is the prospect of getting a contract for royalties on both hardbound and paperback editions. On the initiative of John Spaulding and Morris Goldberger, the company organized a hardbound book publishing unit, naming it Four Winds Press (1965). With 11 titles published during its first year, Four Winds Press increased its list annual and by 1977 had 325 titles.

For this week's Throwback Thursday, I thought it would be interesting to show some of the titles published by Four Winds Press that you've probably never heard of. Here are two early reader books: 1978's Little John Bear in the Big City by Bernice Myers and 1984's Rabbit Seeds by Bijou Le Tord.

What does a bear do when his furry coat is worn off at the elbows and he has an important wedding to attend?

Mama Bear tries to hide the worn spots but it only makes things worse.

Then Little John Bears remembers that his friend Herman has a fur coat and decides to ask if he can borrow it. But Herman lives in the big city, and Little John Bear has never been to the city before. The gardener plans, digs, tills, rakes, sows, labels, waters, weeds, watches, and finally harvests his produce for market. Then putting away his tools, he leaves his garden to be cared for by the autumn leaves and winter sun. I noticed while going through the shelves that there were a lot of teen mysteries published by the imprint. Here are two that stood out to me: 1978's Mystery at Fire Island by Hope Campbell/illustrated by Leigh Grant and 1981's Angie's First Case by Donald J. Sobol/illustrated by Gail Owens. (Does that name look familiar? You may remember Donald J. Sobol as the author of the popular Encylopedia Brown series!)

Kirkus Reviews: It is, it is! Down at the dock he was in a disguise! We've got a mystery,"" whoops Dash's younger brother JC when the two children notice that Dan Alexander, the blond surfer in the house next door, is the same man as Jason Herrick, the dark, bearded ""lawyer"" they'd met earlier on the dock. It's a matter of posture and elbows, which only JC, who mimics people, and talented cartoonist Dash are likely to pick up on. That settled, they do more snooping and sketching. The surfer sneaks in and out at night with a fake scuba tank; his Herrick disguise turns up in flitty Mrs. Guizot's spare closet', and the children are investigating his house when he catches them, ties them up. . . and is stopped just short of doing worse by their teenage sister bursting in, feet and fists flying, and knocking him out. It's a tame but likable adventure, with the suspicious behavior exposed at last as a smuggling operation, involving the theft of Mrs. Guizot's artist-father's paintings from a French museum whose possession of them she resents. Campbell makes good use of the Fire Island setting and communicates something of JC's delight in a mystery, so that addicts attracted by the title won't be disappointed. Twelve-year-old Angie, while tracking a gang of teenage thieves to help her sister who is a police officer, becomes dangerously involved with counterfeiters. Special thanks to Librarian Deimosa Webber-Bey for her ongoing help with this series!