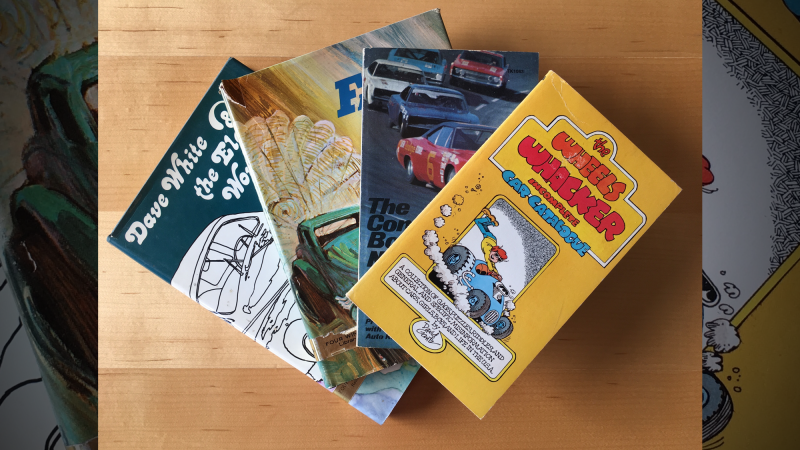 This week, we’re looking at car posters and books from the Scholastic Archive!

As our librarians are currently in the process of digitizing the Archive’s poster collection, they’ve come across lots of interesting finds. Recently, Deimosa had mentioned she found some great car posters from the 80s and 90s, so naturally I had to go and take a look!
The posters did not disappoint: there was a “hot” Porsche print (complete with a beach theme) and a Lamborghini with a mountain backdrop—both perfect for a 90s kid’s bedroom. To complement the posters, we also found some titles to feature by Scholastic Book Services, a division of Scholastic Magazines, Inc.

Check them out below: At sixteen, Larry Cooke was an underweight, un-athletic, “braced” and bespectacled, piano-playing kid. Less than two years later, he had grown five inches, grown out of his braces and his glasses, and become a record-breaking dragster. The Complete Book of NASCAR Stock Car Racing by Lyle K. Engle with the editorial staff of Auto Racing magazine, 1968

The green flag falls. Engines scream as car charge across the starting line. In seconds, the machines are roaring around the narrow strip of asphalt at 180 miles an hour or more. The starter, looking somewhat self-conscious, waved the checkered flag downward. The Renault surged forward away from the starting line with a discreet hum. Maybe you do know everything there is to know about cars—old and new—but here are ten questions whose answers might just stop you. The Wheels Whacker by David Gantz, 1980