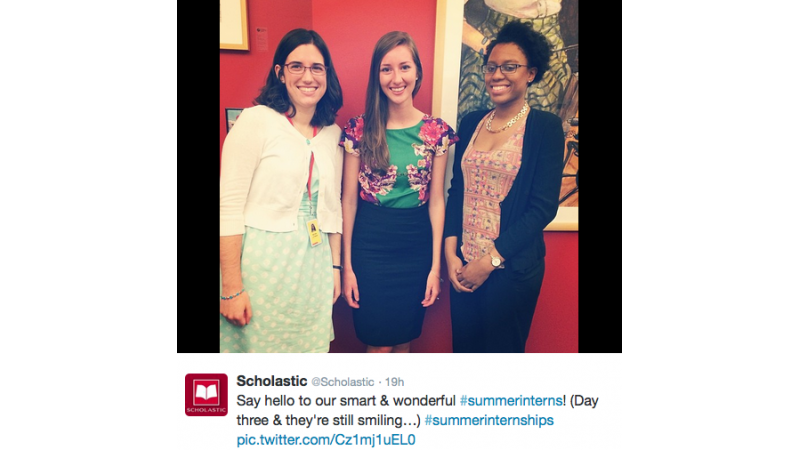 We're thrilled to have three summer interns in the Corporate Communications team, all of whom will be blogging right here throughout the months ahead. First up is Melissa Luttman, a senior Classics major at Holy Cross University. (That's her on the left in the photo!)

We asked her about her Bookprint: the five books that most influenced her life. It's a question we've asked a lot of people, including Taylor Swift, Hillary Clinton, and Neil deGrasse Tyson!

Throughout my life, I’ve had many moments of wondering, “Is there anybody like me out there? Somebody who has the same weird thoughts and feelings that I do?” So I’m always thrilled when I read a book and come across something in a character’s head that I recognize from my own mind. The titles in my Bookprint have taken me to the woods of Wisconsin, the dystopian OneState, and the shores of Crete. But they all have one thing in common: When I get into the main characters’ heads, it’s a little like getting into my own.

Little House in the Big Woods by Laura Ingalls Wilder: Laura was the first book character who felt like a real person to me. (Maybe not such a surprise, since she was a real person, but I digress.) As a little girl who loathed skirts and dresses, I sympathized with her desire to wear boys’ clothes, and felt her frustration when Ma wouldn’t let her. And every Christmas morning, I reread the Christmas chapter in this book, the one where Laura receives her doll Charlotte. It’s the gift she doesn’t realize she wants until she gets it, and the book captures that feeling brilliantly. Laura struck me at the age of six as the kind of girl I would understand and want to be friends with.

Anastasia Krumpnik by Lois Lowry: From this book’s opening lines, I knew that Anastasia could be eight- to ten-year-old me. She obsesses over the little details of her life, like the wart on her thumb – things that seem trivial to older people but are important to a girl beginning to puzzle out who she is. Like me, Anastasia has adults in her life who are well-intentioned but don’t always understand her. But she knows what matters to her, and holds onto it.

What Would Emma Do? by Eileen Cook: This novel was released when I was in high school, and I instantly identified with Emma’s desire to see the world beyond the town where she’s spent her entire life. I understood why she made the choices she did, even though they often seemed to make her life harder. And the book’s ultimate message was one I needed to solidify in my head at that time: You have to do what you think is right, even though everyone else may disagree.

We by Evgeny Zamyatin: We is the first dystopian novel ever written, and in my opinion, the best. But I love it because Zamyatin has a way of capturing thoughts and feelings I’ve had a thousand times but never been able to put into words myself. One example: “They say there are flowers that bloom only once every ten years. Why shouldn’t there be some that bloom only once every hundred, every thousand years? Maybe there are, and we’ve never seen them because this very day is that once-in-a-thousand-years.” To me, that is exactly how the world looks when you’re in love.

Zorba the Greek by Nikos Kazantzakis: The unnamed narrator of this novel is a young man who has spent his life absorbed in books and ideas. (Sound familiar?) But through Zorba, he learns that it’s also important to look up and enjoy the pleasures of the physical world. I read this book while I was studying in Greece, and it’s the perfect expression of the warmth and exuberance that the people there taught me to embrace.

Thanks, Melissa! Sorting out your personal Bookprint can be complicated and thought-provoking, and it's a great in-class or at-home exercise. What would yours be?