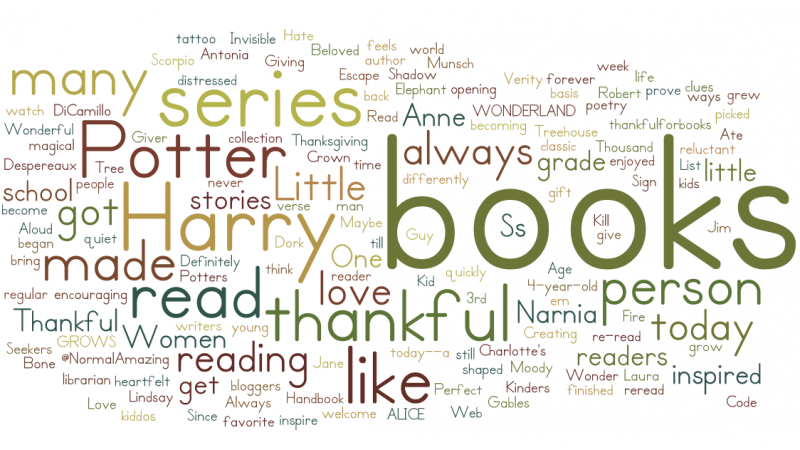 Readers know that books have the power to save, heal, inspire. This Thanksgiving, we're thankful for books.

We asked Twitter to tell us which books they're most thankful for over at #thankful4books. We collected their responses -- from Jane Austen to Louisa May Alcott, from Narnia to Hogwarts -- and created this word cloud based on their submissions. We're not done, though -- head over to Twitter to participate!

I also asked the OOMers which titles they're thankful for:

Anne: I’m honestly thankful for comics, Garfield and Calvin & Hobbes specifically.  When in book form, they are among the first things I remember reading on my own. When I was at the table in the morning with my parents and the newspaper was out, Mom had the crossword, Dad had the news, I had the comics. I still love that memory.

Mike: Jim Henson: The Biography by Brian Jay Jones, which not only brought back the nostalgia of my childhood loving The Muppets, Sesame Street and Fraggle Rock, but also offered me to learn about the man behind our imaginations. I look up to Henson as believed in practicing kindness in everything he did. And Tales of the City (full book series) by Armistead Maupin, which creates a vivid portrait of living in San Francisco spanning the days of disco in the 1970s to the “me” culture of the 1980s. These books reignited my passion for leisure reading after my graduate school studies.

Megan: I'm thankful for an anthology I read earlier this year: The 50 Funniest American Writers. The contributors—from Mark Twain to David Sedaris—kept me happy the whole way through and reminded me how powerful laughter can be.

Alex: I am thankful for The Giving Tree by Shel Silverstein. It was a book I always begged my mom to read aloud to me!

Emma: One book I am thankful for is This Side of Paradise by F. Scott Fitzgerald. My dad was a huge Fitzgerald fan (he could actually recite the entire first chapter of The Great Gatsby from memory—a great party trick!) and this book in particular sparked many wonderful conversations between us. Whenever I miss my dad, I crack open a Fitzgerald novel, and this is one of my absolute favorites to revisit during the holidays.

Michael: After having bariatric surgery earlier this year and losing over 100 pounds, I am thankful for Skinny by Donna Cooner. This book set my journey in motion! On a little less serious but just as important note, I am also thankful that the words ‘Nosy Nose’ were included in The Elephant’s Child: How the Elephant Got His Trunk. Hearing Lydia say them (over and over) has become a daily pick-me-up!

As for me, I'm thankful for some amazing adult literature that swept me away this year -- A Hundred Summers by Beatriz Williams, The Yonahlossee Riding Camp for Girls by Anton Disclafani, and The Goldfinch by Donna Tartt. (Sometimes I have to be reminded that there's not just excellent children's literature out there!)

Which titles are you thankful for?