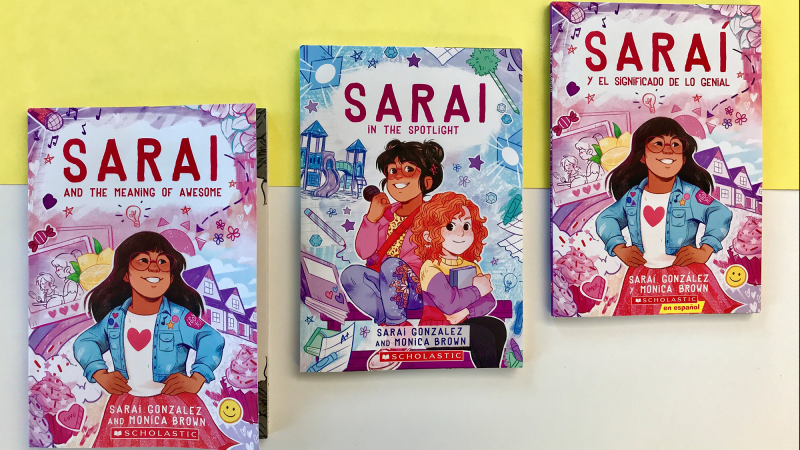 Thirteen-year-old Sarai Gonzalez became a viral sensation after starring in Bomba Estereo’s, “Soy Yo,” a music video about embracing yourself and loving your flaws. The video garnered over 30 million views, earning Sarai praise from Lin Manuel Miranda on Twitter, an invitation to the White House to meet President Obama, and an interview with The New York Times, who called her a Latina icon.

Recently, Sarai teamed up with award-winning Scholastic author Monica Brown to write a chapter book series called SARAI inspired by her life, which feature sweet stories about believing in yourself and loving your family and friends, packed with girl power and Latinx pride.

The first book in the series, Sarai and the Meaning of Awesome, is dedicated to Sarai’s third grade teacher Mrs. Pirrone at Irene E. Feldkirchner Elementary School in Sarai’s hometown of Green Brook Township, NJ. On Monday, November 12, Sarai returned to her old school to visit with Mrs. Pirrone’s class, to surprise the whole school with copies of her book, and to inspire the students and remind them that they can do anything with hard work and believing in themselves. In small classroom visits with both Mrs. Pirrone’s class and Sarai’s fourth grade teacher, Ms. Wagner’s class, Sarai answered students’ questions, read aloud from her book, and signed copies for each student. The day ended with a school assembly attended by grades 2-4 (the series’ reading level) where Sarai answered questions on stage and then surprised the audience with signed copies of Sarai and the Meaning of Awesome, much to the delight of students who cheered loudly when she announced they would each receive the book.

When asked what she hoped students would take away from her book, Sarai said, “I hope readers will learn to love themselves and stick up for themselves and for what’s right. I also hope they learn to believe in themselves and know that they are awesome.” Spending the day with her old teachers was special for both Sarai and her teachers. Mrs. Pirrone gushed, “So often you find that the students you are trying to inspire end up being the ones who inspire you. Sarai is one of those students who inspires me to continue to see my students as future success stories.” IEF principal Paul Fornale added, "To have such a talented, accomplished student from our own community succeed on this scale is an inspiration to our students. We are truly happy that Sarai joined us for the day."

Sarai and the Meaning of Awesome is now available and can be purchased wherever books are sold.