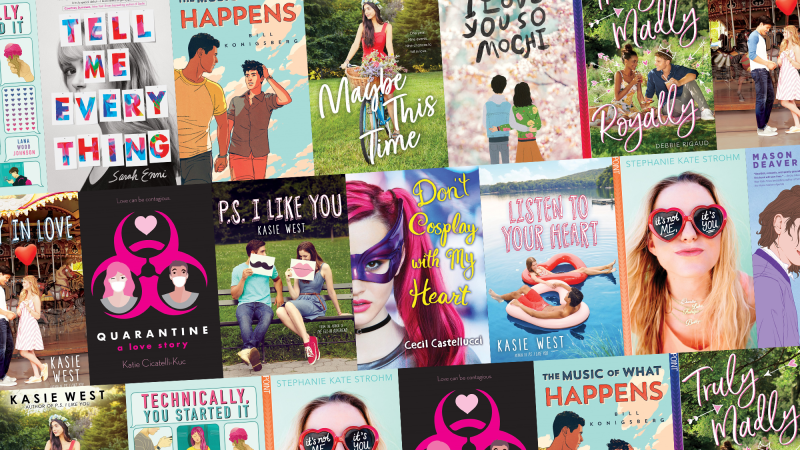 Sparks fly in these 13 YA novels to read this summer

We're seeing fireworks this summer, and I'm not just talking about on the Fourth of July.

We've rounded up some of our favorite YA novels from our friends over at I read YA where the sparks are flying between characters. From summer romances to best friends who realize there's a deeper connection, these books will tug on your heart strings!

Listen to Your Heart by Kasie West

Talking to other people isn't Kate Bailey's favorite activity. She'd much rather be out on the lake, soaking up the solitude and sunshine. So when her best friend, Alana, convinces Kate to join their high school's podcast, Kate is not expecting to be chosen as the host. Now she'll have to answer calls and give advice on the air? Impossible.

Kate finds that while doling out wisdom to others may be easy, asking for help is tougher than it looks, and following your own advice is even harder.

Max: Chill. Sports. Video games. Gay and not a big deal, not to him, not to his mom, not to his buddies. And a secret: An encounter with an older kid that makes it hard to breathe, one that he doesn't want to think about, ever.

Jordan: The opposite of chill. Poetry. His "wives" and the Chandler Mall. Never been kissed and searching for Mr. Right, who probably won't like him anyway. And a secret: A spiraling out of control mother, and the knowledge that he's the only one who can keep the family from falling apart.

Over the course of one summer, two boys will have to face their biggest fears and decide what they're willing to risk — to get the thing they want the most. Tell Me Everything by Sarah Enni

Ivy's always preferred to lay low, unlike her best friend Harold, who has taken up a hundred activities as sophomore year begins. But Ivy has her own distraction: the new anonymous art-sharing app, VEIL.

Being on the sidelines has made Ivy a skilled observer, and soon she discovers that some of the anonymous posters are actually her classmates. While she's still too scared to put her own creations on the app, Ivy realizes that she can contribute in an even better way -- by making gifts for the artists she's discovered. The acts of kindness give her such a rush that, when Ivy suspects Harold is keeping a secret, she decides to go all in. Forget gifts -- Harold needs a major party.

But when her good intentions thrust her into the spotlight, Ivy's carefully curated world is thrown into chaos. Now she has to find the courage to stand out... or risk losing everything and everyone she loves most.

Truly, Madly, Royally (out on July 30th!) by Debbie Rigaud

Zora Emerson is not here to play. She's enrolled in a prestigious summer program, and is ready to use what she's learning to change the world (or at least her corner of New Jersey, for now).

Zora's not expecting to vibe with any of her super-privileged classmates. So she's shocked to find she's got chemistry with Owen Whittelsey, who is charming, funny, undeniably cute...and turns out to literally be a prince. As in, his parents are the king and queen of a small European country. What?

Suddenly, Zora's summer is looking a lot more complicated -- especially when Owen asks her to be his date at his older brother's wedding. Can her feelings for Owen, not to mention her sense of self, survive the royal chaos? What if the person you were falling for was a total mystery?   Signed, sealed, delivered...While spacing out in Chemistry class, Lily scribbles some of her favorite song lyrics onto her desk. The next day, she finds that someone has continued the lyrics on the desk, and added a message to her. Intrigue!Soon, Lily and her anonymous pen pal are exchanging full-on letters -- sharing secrets, recommending bands, and opening up to each other. Lily realizes she's kind of falling for this letter writer. Only who is he? As Lily attempts to unravel the mystery, and juggle school, friends, crushes, and her crazy family, she discovers that matters of the heart can't always be spelled out...

Don’t Cosplay with My Heart by Cecil Castellucci

When Edan Kupferman dresses up like her favorite character, Gargantua, she feels tall and powerful. That's important right now, because her family is a mess, her best friend is gone for the summer, her crush is confusing, and Edan's feeling small and not sure which end is up.

When Edan's cosplaying, she can be angry, loud, and not the good girl everyone thinks she is. And when she's at conventions, she feels like she's found her own Team Tomorrow. But when her personal life starts to spiral out of control, Edan has to figure out whether she needs a sidekick, or if she has the strength to be the hero of her own story.

Technically, You Started It by Lana Wood Johnson

When a guy named Martin Nathaniel Munroe II texts you, it should be obvious who you're talking to. Except there's two of them (it's a long story), and Haley thinks she's talking to the one she doesn't hate.

A question about a class project rapidly evolves into an all-consuming conversation. Haley finds that Martin is actually willing to listen to her weird facts and unusual obsessions, and Martin feels like Haley is the first person to really see who he is. Haley and Martin might be too awkward to hang out in real life, but over text, they're becoming addicted to each other. Oliver wants a girlfriend, and there's a girl back home who might be interested in him. The problem is, he has to spend his spring break on a volunteer trip in the Dominican Republic. Flora, on the other hand, isn't really looking for a boyfriend. She just wants to end a miserable spring break visiting her dad and her new stepmom in the D.R.

The solution to both their problems? Get back home to New York ASAP. Sadly, they won't be getting there anytime soon.

Their hopes are dashed when Flora's impulsiveness lands them in quarantine — just the two of them. Now, the two teens must come together in order to survive life in a bubble for 30 days. In that time, love will bloom. But is it the real thing, or just a placebo effect?

Maybe This Time (out on July 9th!) by Kasie West

Weddings. Funerals. Barbecues. New Year's Eve parties. Name the occasion, and Sophie Evans will be there. Well, she has to be there. Sophie works for the local florist, so she can be found at every big event in her small hometown, arranging bouquets and managing family dramas.

Enter Andrew Hart. The son of the fancy new chef in town, Andrew is suddenly required to attend all the same events as Sophie. Entitled, arrogant, preppy Andrew. Sophie just wants to get her job done and finish up her sketches so she can apply to design school. But every time she turns around, there is Andrew, getting in her way and making her life more complicated. Until one day she wonders if maybe complicated isn't so bad after all . . . When Ben De Backer comes out to their parents as nonbinary, they're thrown out of their house and forced to move in with their estranged older sister, Hannah, and her husband, Thomas, whom Ben has never even met. Struggling with an anxiety disorder compounded by their parents' rejection, they come out only to Hannah, Thomas, and their therapist and try to keep a low profile in a new school.

But Ben's attempts to survive the last half of senior year unnoticed are thwarted when Nathan Allan, a funny and charismatic student, decides to take Ben under his wing. As Ben and Nathan's friendship grows, their feelings for each other begin to change, and what started as a disastrous turn of events looks like it might just be a chance to start a happier new life.

It’s Not Me, It’s You by Stephanie Kate Strohm

Did you hear...? NATALIE WAGNER, random freshman: Avery Dennis--the Avery Dennis—got dumped right before prom. COCO KIM, best friend: Avery has never been dumped! Well, okay, except for this one time. BIZZY STANHOPE, officially the worst: The head of the prom committee doesn't have a date to the prom. It is beyond pathetic. JAMES "HUTCH" HUTCHERSON, lab partner: Did Avery really swear off dating until she discovers why her relationships never work out? I'll believe that when I see it. ROBBY MONROE, ex-boyfriend: Did you get interviewed by Avery Dennis for her project? TRIPP GOMEX-PARKER, ex-boyfriend: Avery Dennis is straight-up interviewing everyone. AVERY DENNIS: recently dumped/topic of much gossip: Okay. Everyone is talking about it, so let's talk about it...

I Love You So Mochi by Sarah Kuhn

She's obsessed with transforming everyday ephemera into Kimi Originals: bold outfits that make her and her friends feel like the Ultimate versions of themselves. But her mother disapproves, and when they get into an explosive fight, Kimi's entire future seems on the verge of falling apart. So when a surprise letter comes in the mail from Kimi's estranged grandparents, inviting her to Kyoto for spring break, she seizes the opportunity to get away from the disaster of her life.

When she arrives in Japan, she's met with a culture both familiar and completely foreign to her. She loses herself in the city's outdoor markets, art installations, and cherry blossom festival — and meets Akira, a cute aspiring med student who moonlights as a costumed mochi mascot. And what begins as a trip to escape her problems quickly becomes a way for Kimi to learn more about the mother she left behind, and to figure out where her own heart lies. Lucky in Love by Kasie West

Maddie's not impulsive. She's all about hard work and planning ahead. But one night, on a whim, she buys a lottery ticket. And then, to her astonishment — She wins!In a flash, Maddie's life is unrecognizable. No more stressing about college scholarships. Suddenly, she's talking about renting a yacht. And being in the spotlight at school is fun... until rumors start flying, and random people ask her for loans. Now, Maddie isn't sure who she can trust.Except for Seth Nguyen, her funny, charming coworker at the local zoo. Seth doesn't seem aware of Maddie's big news. And, for some reason, she doesn't want to tell him. But what will happen if he learns her secret?