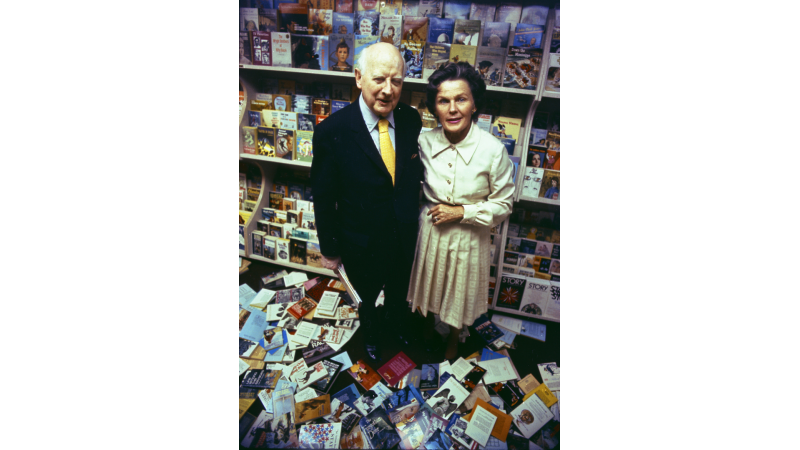 Scholastic and RIF from the start This is a guest blog provided by Dick Robinson, Chairman, President and Chief Executive Officer of Scholastic. This post was originally published on the Reading Is Fundamental blog in celebration of their 50th anniversary.

In the mid-1960s, my then boss at Scholastic, Bill Boutwell, excitedly told me and my father, M. R. (Robbie) Robinson, the founder of Scholastic, that Margy McNamara, the wife of U.S. Defense Secretary, Robert McNamara, had been tutoring boys in D.C. and that they had learned to read better by being read to and choosing their own books.  A few months thereafter, Mrs. McNamara had taken that learning and expanded it to develop the idea of Reading Is Fundamental, a program that would help young people develop their own love and excitement for reading by choosing and reading their own books. Fueled by the enthusiasm for President Johnson’s Great Society and War on Poverty, she developed the idea of working with community organizations who had a network in the city neighborhoods to handle the distribution of the books which she would get from publishers both for free and later for discounts funded by foundations and charitable organizations that were committed to young people who needed support.

Scholastic and Robbie were excited by Mrs. McNamara’s plan. They met and instantly formed a bond which resulted in Scholastic making the largest contribution of books to RIF at that time, distributed through a Harlem youth organization supported by the Clark Foundation. There is a marvelous picture in the late-1960s or early-1970s of these two pioneers surrounded by mountains of free books which were slated for distribution by RIF in Harlem. Mrs. McNamara had not only founded RIF, but now had developed a pipeline for the distribution of the books.

Scholastic began to work with RIF and helped create RIF projects in schools which were supported by local community organizations and by the schools themselves. In the early 1970s, Mrs. McNamara had managed to secure funding from Congress for matching funds for RIF based on the success of local funding efforts. Soon there were 3,500 or so RIF projects and millions of kids were receiving books from Reading Is Fundamental throughout the United States.  Almost all of these young people were in schools which qualified for free or reduced lunch under Title I, so RIF was making a huge contribution to reading through these many RIF projects. Later, Mrs. McNamara recruited other amazing women such as Ann Richardson and Barbara Bush to become leaders of RIF, and collectively this organization has had a consistent record of support for young people that is unrivaled in the United States or anywhere. Today, Lynda Johnson Robb, founding RIF Board Member and literacy advocate, continues to be a driving force within RIF, carrying on this heritage. Most recently, of course, Carol Rasco has been the chief executive of RIF and has carried it to new heights.

So from this spark of enthusiasm in the late-1960s and early-1970s between Margaret McNamara and M.R. Robinson, a 50 year partnership between RIF and Scholastic was born, and continues today—fifty years after two people who wanted children to read more and learn more began their work with a humble donation to one of the original RIF projects, located in Harlem.