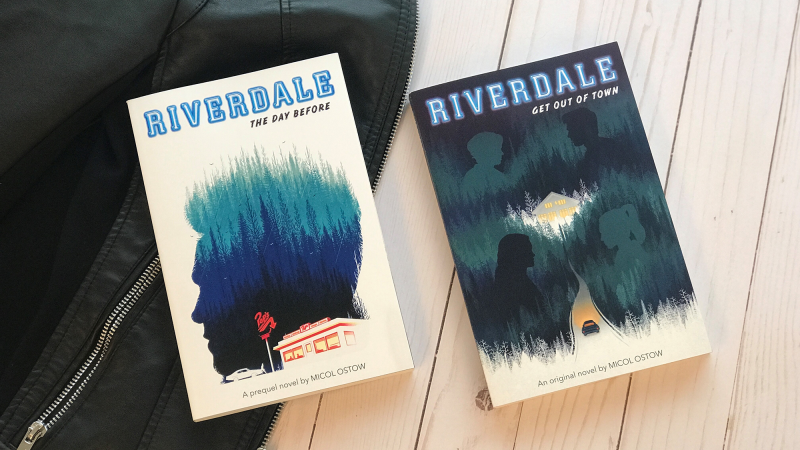 Riverdale author Micol Ostow gives a peek into her new YA novel: Get Out of Town

What’s it like to author an original story based on the world of a beloved brand and hit TV show? YA author of Riverdale and Mean Girls, Micol Ostow, knows this territory well, and she gave us a sneak peek into the writing process of her newest book: Riverdale: Get Out of Town.

Perfect for mystery and crime fans ages 12 and up, Riverdale: Get Out of Town tells an original, not-seen-on-the-show story featuring all your favorite characters from the world of Archie Comics and Riverdale. In this second book in the series, Archie is doing the best he can to enjoy his summer while standing trial for a murder he didn’t commit. Betty, Veronica, and Jughead all know he is being framed by Hiram Lodge, but as the end of the trial creeps closer, the evidence stays stacked against him. Growing desperate for evidence that will prove Archie’s innocence, the gang decides to head back to the scene of the crime at Shadow Lake. But being deep in the woods at the Lodge cabin proves just as dangerous as ever. Will they find the evidence they need to clear Archie’s name? And, more importantly, will they make it back to Riverdale alive?

A Conversation with Micol Ostow about Riverdale: Get Out of Town

What was it like to take Riverdale, an immensely popular television series, and use it to inspire an original YA prequel story?

A bit intimidating, actually! Riverdale has such a huge, passionate fan base that I felt a lot of pressure to do right by the characters and the show writing. It's such a unique, quirky blend of different styles and genres, and I wanted the books to reflect that. I hope they do!

Riverdale was originally based off of the Archie comic book series. Did you find yourself working with both Scholastic and Archie Comics often in your process for writing Get Out of Town? What was your writing process like?

I loved Archie comics as a child, and was so intrigued when Riverdale premiered as a modern, noir-ish spin on the classic characters. When Scholastic approached me to write a prequel for the book series, I jumped. My editor said that as soon as she heard "teen drama with a dark, edgy twist" she thought of me, which is kind of how I always want to be thought of!

Initially, it was the Scholastic team that had the primary contact with Archie, and we would all, respectively, work with the television writers to be sure that our storylines converged as seamlessly as possible. But this past summer, the Archie comics team asked if I'd be interested in taking over the Riverdale season 3 comic arc. Although I'm a casual comic reader, it was a huge gesture of faith on their part, and I'm still fairly stunned it went as smoothly as it did. Once I was on board writing the comics and the books, there was a lot more communication with all sides. And now I'm basically all Riverdale, all the time! I've written five comics for the series, which will be bound into one graphic novel next fall.

As for process, it begins with a phone call with the Riverdale writers, who give us some insight as to the story arcs for the season. From there, my book editor and I brainstorm concepts, which then require approval from the studio and from Archie. For the comics, I pitch an A-story and a B-story for each issue, followed by a page breakout (a page-by-page outline of what I envision for the story, for the artist to begin to work from). In the past year I've basically written 12 different Riverdale stories. And it was amazing and so much fun, but I have no idea how the show writers put together 22 episodes a season!

Is this book only for fans of the TV show? If not, why do you think it will appeal to readers who aren’t picking it up because of the show?

Get Out of Town is a thriller set in a cabin in the woods, which personally, I'd read even if I didn't watch Riverdale! Of course, there are references and Easter eggs that a dedicated fan would probably appreciate more than a casual reader, but ideally a well-told story has broad appeal.

How was the process for writing Get Out of Town different than writing The Day Before? Were there any special challenges that you had to overcome in writing this second book of the series?

The prequel had a built-in structure to its narrative arc, which was that we knew where it ended (the day before Jason Blossom's murder). And we also had a sketchy overview of how each character had spent the summer based on the Riverdale comic. And obviously there was a certain comfort in having the general beats of the stories already established. The challenge in that case was making sure that the book offered a broader, unique reading experience. Get Out of Town was a totally original story, which meant that I was plotting a mystery from point A to point Z, while still staying true to the vibe of the show and the essence of the characters. In some ways, it was freeing to have more leeway to explore, but writing any novel is difficult, and plotting a mystery all the more so, in my opinion!

In what ways is Get Out of Town special or unique from the first book?

Get Out of Town is a fun story because it directly references events on the show, but it's still a completely unique and original story. It's specifically set in the summer before season 3 of the show, so diehard viewers get a glimpse of some behind-the-scenes drama.

What part of your process for writing Get Out of Town was the most surprising to you?

Some of the plot twists and connections that revealed themselves as I wrote came as a surprise! I'm an outliner, but as I worked, I found threads arising that I hadn't anticipated, and watching small details come together was truly thrilling. The subconscious is bananas!

For more insight on Micol’s experience with Riverdale: Get Out of Town, click here to visit IreadYA for an extended Q&A!