“We all know that 6 million is a lot. But have any of us seen what 6 million looks like?” asks Gordon Korman, author of middle grade novel Linked.

The horrors and casualties of the Holocaust are ones we are all familar with – the most documented genocide in history, it was the systematic, state-sponsored persecution and murder of six million Jewish men, women and children and many other groups by the Nazi regime and its collaborators.

Linked explores how big a number six million is, and honors the six million Jewish people murdered during the Holocaust by recreating that number through symbolic paper chain links. Each paper chain link is representative of one person killed during the Holocaust, and the huge number of links is meant to show the devastating impact of the number of Jewish people murdered. “When something becomes history, it becomes fast facts,” explains Gordon about the meaning of the project. “The project denied us taking that 6 million and making it a fact you could just memorize about the number of people who died. You can’t help but appreciate the vastness of it.” 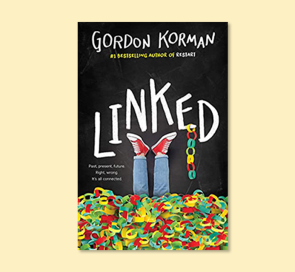 In the book, middle schoolers Link, Michael, and Dana all live in a quiet town in Colorado with a small, if not nonexistent Jewish population (Dana is the only Jewish person in the town, until Link discovers his Jewish identity). The main conflict of the story is introduced when someone sneaks into the middle school to vandalize it with swastikas, and students realize it’s not an isolated incident of antisemitism. While learning about this incident and about the Holocaust, the middle schoolers band together to work on the paper chain link project to brings the whole community together in the face of antisemitism. Linked is a Sydney Taylor Honor Book, an award presented annually to outstanding books for children and teens that authentically portray the Jewish experience.

The students in Linked are inspired to make the paper chains based on a Holocaust memorial created in 1998 in Whitwell, Tennessee called the Paper Clip Project, where students collected six million paper clips to represent the number of Jews killed during the Holocaust. Their goal was to recognize how much six million really is, and to that effect, the humanity, cultural impact, and people lost during this time.

Both of these projects, factual and fictional, ultimately share the same goal: to reflect on and learn about the past by retelling what happened in a way that’s digestible for kids to understand and learn from. “What makes me the most proud of Linked is it has had kids make connections to the Holocaust and social justice movements, and there is no better a time for it,” says Gordon. “It’s a coincidence I would rather not happen. It’s kind of sad, the number of things that have happened just in the time that I started working on the book and it coming out that underscored how relevant and important a book like Linked is right now.

When we tell a story, there are two core questions in the backs of our minds: Why do we tell it? and What can we learn from it? The paper chain link project in Linked, an interpretation and retelling of history and the Paper Clip project, shows readers the impact of the Holocaust, so hopefully history doesn’t repeat itself in terms of antisemitism, hate, and genocide.

“I think that as I’ve gotten older, I’ve seen that it’s important to process ancient history in terms of relatively modern history. I think that to take history and make it real and make it present is really important because it’s easy as time goes forward to relegate it to a more distant past,” says Gordon. “We can’t understand where we are without understanding where we’ve been and how we got there.”