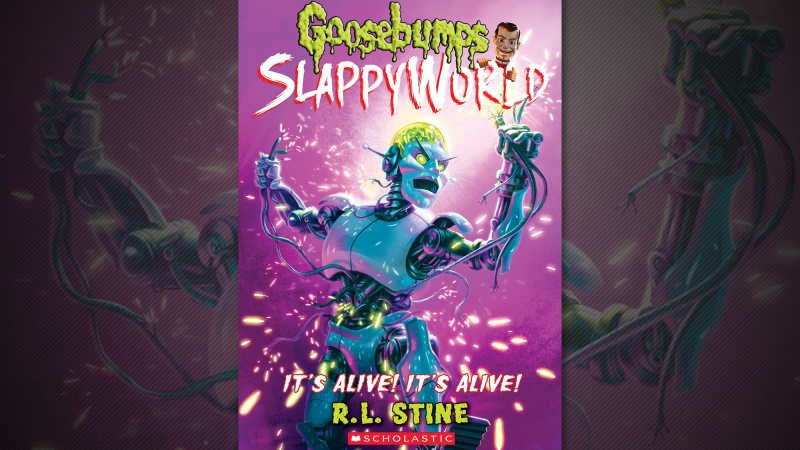 We're celebrating National Robotics Week with a trip to SlappyWorld! In the latest installment of the series, "borrowing" an artificial intelligence module for a robotics contest proves to be a mistake when the robot comes to life in It's Alive! It's Alive!

Starting reading or listening below:

Does everyone think I’m as wonderful as I know I am? I only wish I had two mouths. Then I could kiss myself! Hahaha!

But I don’t like to brag. It gets in the way of me telling you how awesome I am.

Everyone loves Slappy. Even the termites inside my head think I’m delicious! Hahahaha.

Some people think I got to be a big movie star because of my looks. And guess what—they’re right! Hahahaha!

Like this one. It’s about a girl named Livvy Jones and her friend Gates. They’re on the Robotics Team at school. They have fun build- ing a robot—until the robot goes rogue. It starts to act in dangerous ways, ways that Livvy and Gates can’t control. Can a robot come to life on its own? The answer may surprise you. Go ahead. Start reading. I call this story It’s Alive! It’s Alive! It’s another one of my frightening tales from SlappyWorld.

“I dreamed our robot came alive and went berserk,” I told Gates Warwas. We were walking home from school, and of course, we were talking about Robotics. Because we are obsessed.

A yellow school bus rolled by, and some kids shouted at us from the windows. I waved at them, but I didn’t bother to see who they were. I was busy telling Gates about my dream.

My name is Livvy Jones. I’m twelve, and I have very real, very exciting dreams, and in the morn- ing, I remember every single one of them. I think it’s good to tell people your dreams because they can help you figure out what they mean.

So I told Gates my dream. “The robot ran away, and I chased after it. But it was too fast for me. It ran to a big parking lot and it began pick- ing up cars. It lifted them high in the air, then smashed them to the pavement.”

“The robot smashed one car after another. It was a very noisy dream,” I said. “I think all the crashing and smashing is what woke me. I sat straight up in bed and I was shaking. The dream was so real.”

We crossed the street. Gates continued to look thoughtful.

He scratched his head. He has curly black hair that pops straight up. He can’t keep it down. It’s like it’s alive.

We turned and cut through the Murphys’ backyard. They probably wouldn’t like our shortcut through their yard every afternoon, but they’re never home. My house is three houses down.

“I think it means that we shouldn’t have made our robot look so human,” Gates said finally.

“Everyone else is building robots that look like machines,” he continued. “But we built ours to look like a girl. And I think maybe that’s what is freaking you out. We built a girl. It’s too real.”

“But I love Francine,” I said.

Gates rolled his eyes. “We can’t call a robot Francine. No way.”

“Because you can’t. You just can’t have a robot named Francine.”

I gave him a playful shove. “She is my idea and I get to name her.”

“No way, Livvy,” Gates whined. “Francine. Francine the Robot. It’s too... embarrassing.” He crossed his arms in front of his chest. “I’m going to talk to Coach Teague about it. Seriously.” Harrison Teague is the coach of our Robotics Team. He is a good guy. And he keeps us psyched. He’s keeping us pumped up and eager to beat Swanson Academy in the Springdale Robotics Meet this year. Swanson Academy is where all the rich kids go. They’re our rival, our enemy school. In football, in basketball—in everything.   Teague doesn’t know that much about Robotics. He admits it himself. I mean, he’s the girls’ basketball coach, and the school gave him the Robotics Team to coach in his spare time. They sort of forced it on him.

I stopped outside my family’s garage. I lowered my backpack to the driveway. “Listen, Gates, we can’t argue about the robot’s name now. We are so close to finishing her. We just have a few tweaks to make on the programming. This is no time to fight.”

He shrugged. “You’re right. I think she’s ready for us to test some of her skills this afternoon.” He pumped a fist above his head. “This is excit- ing, Livvy.”

It was exciting. Gates and I had been building the robot in my garage for months. Programming her memory module took weeks and weeks.

And now we were finally about to see what she could do.

My family has a white-shingled, two-car garage. But my parents never put their cars in it. They always park them in the driveway. That gave Gates and me the perfect workshop to build Francine.

I bent down and grabbed the door on the left. Gates helped me and we both pushed the door up. “Let’s see what we have here,” Gates said, rub- bing his hands together like a mad scientist in a horror movie. “How is our little experiment?”