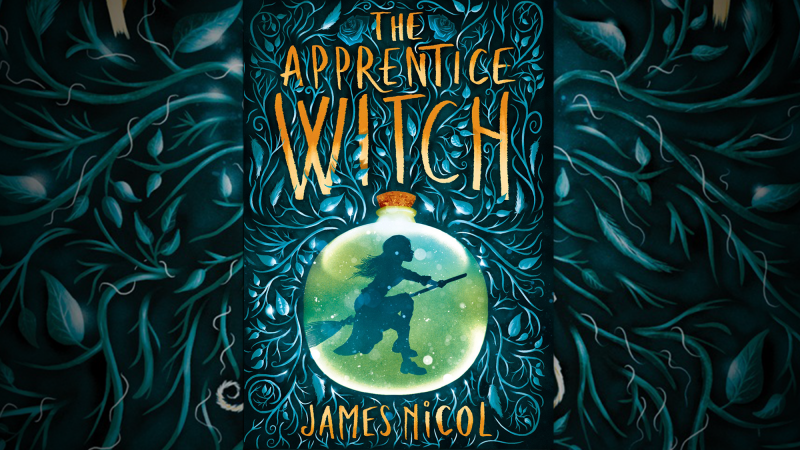 Read an excerpt from The Apprentice Witch by James Nicol

It's Halloween season! To get in the spirit, we're sharing an excerpt from a spooky, mysterious, or otherwise witchy book each week right here on OOM! First up: The Apprentice Witch by James Nicol.

Arianwyn has flunked her witch's assessment: She's doomed. Declared an apprentice and sent to the town of Lull in disgrace, she may never become a real witch—much to the glee of her arch-rival, Gimma.

But remote Lull is not as boring as it seems. Strange things are sighted in the woods, a dangerous infestation of hex creeps throughout the town, and a mysterious magical visitor arrives with his eye on her.

With every spirit banished, creature helped, and spell cast, Arianwyn starts to get the hang of being a witch—even if she's only an apprentice. But the worst still lies ahead. For a sinister darkness has begun to haunt her spells, and there may be much more at stake than just her pride . . . for Arianwyn and the entire land.

Chapter One: The Civil Witchcraft Authority

Witches of Hylund, the poster declared, your country needs you! Join up TODAY! Arianwyn stared up at the elegant woman gazing proudly from the poster. The woman’s hair was golden and flowing, her lips bright red. She wore the dark navy uniform and the silver star of a fully trained witch. Arianwyn glanced down at her coat and the space that her own star would soon occupy.

Far-off bells sounded the hour, cutting through the noise of busy morning traffic rushing past, horns screaming out across the bustling street. She would be late if she stood daydreaming much longer. Grabbing her bag, she skipped between the crush of passersby through tall wrought-iron gates, following the signs for registration. Steps led through an open doorway and into a long, gleaming corridor.

She joined one of several haphazard lines and suddenly wished she hadn’t. Gimma Alverston was handing over her identity card at the desk, surrounded as ever by a small group of other young witches.

Gimma looked just like the witch on the poster outside, all flowing golden hair and bright smile. Arianwyn patted nervously at her own messy curls and tried to shrink back into the line. But she was too late—and too tall. One of the other girls—a neatly dressed witch who Arianwyn recog- nized as Polly Walden—nudged Gimma and pointed in her direction. Gimma glanced over, offered a mean, tight smile, and whispered something to the others. The corridor rang with cruel giggling and Arianwyn went red. This is all I need, she thought. What did I ever do to her?

Gimma was cruel and a snob, and you were either with her or against her. She’d been like this since they first met at school five years ago. As they had been the only witches in their year, everyone had assumed they would get along, but Gimma had made it quite clear she didn’t want to be friends with Arianwyn, and that was that.

“Oh, look, it’s Arianwyn ‘Dribble’!” Gimma called out as she retrieved her card from the young man at the desk and tucked it away in the silly tiny beaded bag that she always carried with her. “Ready for your evaluation?” More laughter. Gimma moved slowly down the line until she reached Arianwyn. “I’ve already been offered a posi- tion as a private witch for a family in Highbridge, you know,” she said smugly. “I wouldn’t be seen dead dealing with some old lady’s pixie infestation, or making charms for a bunch of country bumpkins. What do you think you’ll be doing, Dribble, if you pass?”

The other girls crowded around Arianwyn, smirking. Gimma flicked her mane of shiny hair. “I do hope they find you something you can cope with, nothing too taxing! Not everyone has the luxury of the training my family provided for me. Who trained you, Arianwyn?” she asked, even though everybody already knew.

“I heard it was her grandmother,” Polly whispered nastily.

She wished more than anything that she had the nerve to do something, say something. But she looked away, as she had so many times before, finding a spot on the wall to focus on even as tears pricked at her eyes. This was the usual way she dealt with Gimma’s taunts.

Ignore her and she’ll get bored.

Arianwyn had reached the front of the line and hadn’t noticed. Gimma and her group had wandered off. A harassed young man, about her age, smiled politely at her as he fumbled with piles of folders, a typewriter, and various notes. His dark hair flopped across his face and he tried to blow it out of his eyes.

“And do you have your identity card, please, Miss . . . Gribble? Oh, here you are!” He yanked a brown card folder from the bottom of a precarious pile, which wob- bled threateningly. He blushed as Arianwyn handed over her witch’s identity card, clearly stamped with a large blue UA for Unevaluated Apprentice. As the young man reached forward, the column of paperwork shifted, quivered, and slowly started to slide toward the floor. As quick as a blink, Arianwyn leaned forward and with her index finger sketched a tiny symbol onto the desk.

Book 2: A Witch Alone is now available! Get more information and start reading an excerpt here! Want more? Here's the book trailer for The Apprentice Witch!