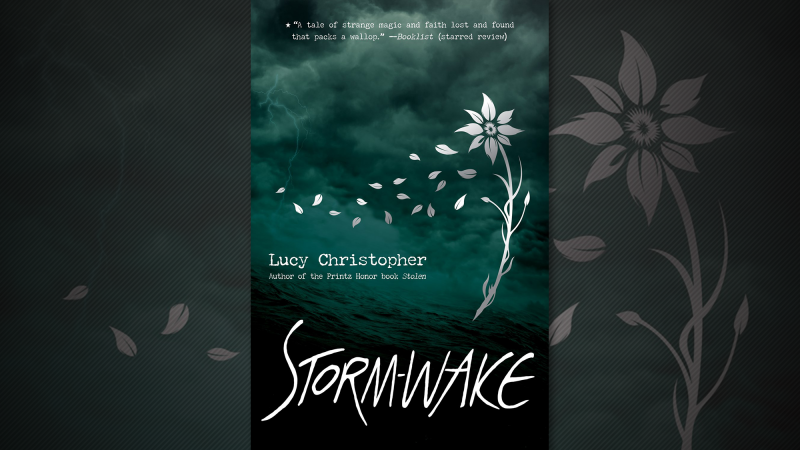 In celebration of the release of Lucy Christopher’s latest novel, Storm-wake, she sat down with her editor, Barry Cunningham from Scholastic’s Chicken House imprint, to discuss magic, the interplay between our dreams and reality, and the different ways that people enter a book. For an excerpt of Storm-wake, click HERE.

BC:You’ve written a radical, new, and totally modern retelling of The Tempest filled with fierce storms, healing stormflowers, and the questions we all face about what lies beyond that small piece of land we call home. Tell us a little about Storm-wake and where the idea came from.

LC: Storm-wake started from daydreaming. I remembered going to watch The Tempest as a teenager. I’d been mesmerized by its stormy setting and its magical-realism elements (I had no idea that Shakespeare wrote fantasy!), but I also remembered thinking the most interesting character was under-written! I’d wanted to know more about fifteen-year-old Miranda, not boring old Prospero. Let’s face it, Miranda has the best story anyway—growing up with only her dad as company on a very strange island. (Oh, and she also falls in love with a prince!) So I daydreamed about how her story could be written now. It would have to be a weird island for one thing. It would also have to be a weird dad who took them there in the first place. In Storm-wake, Pa (Prospero) tells Moss (Miranda) that the world has been flooded; he says that only they can fix this darkness.

BC:Though in some ways Storm-wake is quite different from your previous novels, it has all of your familiar trademarks: growing up with the difficulties of tempestuous relationships and discovering truths for yourself. One of the strongest themes in the novel is the difficulty of differentiating reality from one’s imagination. How does this theme appear in Storm-wake and why does it speak to you?

LC: I think the interplay between reality and dream is the key theme of The Tempest—more specifically, merging reality and dream to create story is what The Tempest is about. (Remember “we are such stuff as dreams are made on…”?) I wanted to capture this theme in my own novel, too. I created a tale where one kind of reality is first portrayed to the reader (everything Pa has told Moss about the island and the flooded world), and then it’s upended halfway through with the arrival of two boys from England. These regular boys bring a different version of reality—for them, the world is not flooded and never has been. By placing this new version of reality at the start of the novel’s second half, I’m also mirroring the theatre world’s tradition of “all change” as you go into the second half of a play.

BC:There are so many elements packed into Storm-wake for readers to relate to—the feeling of isolation, of planning one’s escape, the false sense of calm, and the slow and steady crumbling of one’s reality. What do you think that readers will identify with most?

LC:  Different readers will identify with different things. I read recently about there being four “doors” into reading a book—you enter because you like character, setting, story, or language. I’ve tried hard to make doors for these aspects in my story. If you love language, this is definitely a book for you—I deliberately try to echo the feel and rhythm of Shakespeare. (I use compound words, and the special rhythm of Shakespeare’s prose.) If you love setting, this is also for you—setting is key here. Storm-wake’s weather changes according to the emotions of its characters, and the island is a character in its own right. Story and characters are inspired by Shakespeare’s original, but I’ve tried to bring a fresh, modern twist to them. Most of all, I hope teenagers might feel resonance with themes of growing up and discovering identity; the power that these revelations hold.