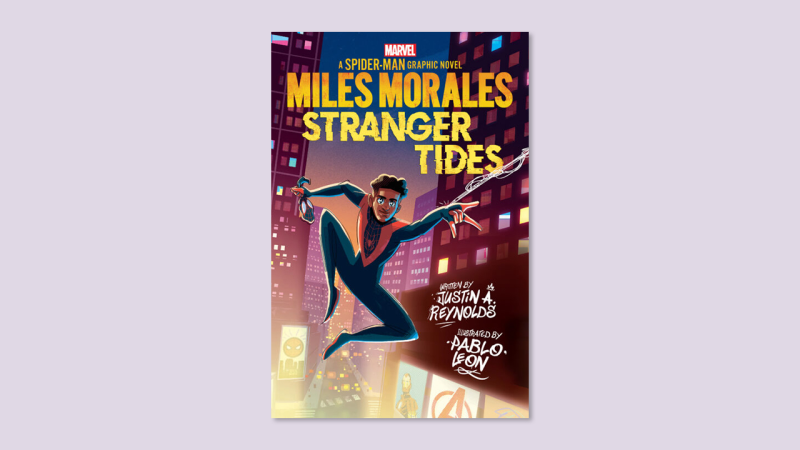 We interviewed Pablo Leon, illustrator of Miles Morales: Shock Waves and Miles Morales: Stranger Tides, as part of a series celebrating Hispanic and Latine Heritage Month. The titles we’re highlighting this month illuminate the diversity and breadth of the Hispanic and Latine experience, as well as the power of growing up in a multicultural household. The characters in these stories are exploring how their Latine heritage, their communities, and their interests and talents converge to make them who they are.

Miles Morales has been around as a character for more than a decade, and Spider-Man for much longer. How did you approach illustrating a new version of a well-known and beloved character? What was important for you to convey about Miles as an Afro-Latino teen?

My background is in animation design, so of course I also dove into this with the “Into the Spider-Verse” style in mind, which I felt at the time was the most accessible entry point for this project. I didn’t want it to look exactly like it, but recognizable enough so if that movie is your entry point, it feels welcoming. I tried to incorporate and streamline as much as possible. Looking at it now, there’s so many things I would’ve done differently, but I’m still happy with how it came out. It’s important to me to portray Miles’ Afro-Latino side because it’s one that’s often sidelined and not nearly explored as much, and I think it’s just as important to his character development.

How did you and Justin A. Reynolds collaborate to create this version of the character? Did you draw from your own backgrounds to inform the story? 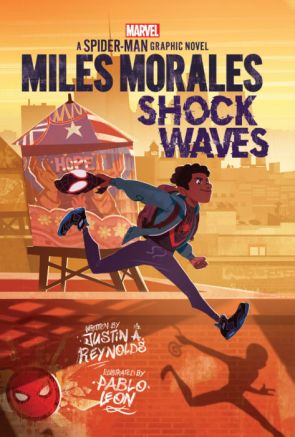 Visually it’s all me. I tried my best to match the visuals to his characters and give them as much appeal as possible. I know Miles means so much for so many Afro-Latines and Latines. I mean, identity is such a deep dive, but I love knowing that so many mixed-kids out there picked this up and felt seen. To me, that’s it—that’s the big win. While we share some similarities, I’m not Puerto Rican, so I can’t speak for that specific Boricua experience, but I tried to add bits here and there that I felt someone could relate to, both from growing up in a very Latino household and neighborhood in the East Coast, as well as from being Latino myself.

Miles’ multicultural background and his links to his family and community are a major part of his story. How do you think they impact the way approaches his responsibilities as a superhero? We often see heroes dealing with global, sometimes unrealistic struggles, but Miles Morales: Shock Waves focuses largely on Miles’ family ties to Puerto Rico and imminent danger to the island. Was it important to you to show a threat that was personal to Miles, and that also happened in the real world?

Absolutely. In recent years it has gotten a bit better, but there’s still a stigma. It’s almost taboo to talk about certain politics and social issues, otherwise you’d be marked as ‘hard to work with’, because you care about something. In my opinion, we’re past the point of being apolitical, or having no opinion over the social changes in the turmoil times we’re living. With the Miles Morales story, there’s definitely an approach to Puerto Rico and especially during these times when so much is constantly happening in the island in the last few months alone. Kids definitely understand SOMETHING is happening, they’re not oblivious. It’s okay to have awareness and be able to talk about the real issues we’re facing.

You were able to portray Miles as a Black and Latino teenager growing up in Brooklyn while juggling heavy, sometimes conflicting, responsibilities, and also as a globally recognizable superhero. How did you do both while keeping his personality front and center?

It’s both thrilling and absolutely terrifying. It’s an honor that they let me work and play around with Miles’ character and his world. It’s terrifying because you want to do so much, inject a little bit of you into it, but also please everyone at the same time, not step on anyone that came before, and more importantly, make the character relatable to the reader. Not a lot of people from my background get this opportunity, as far as I know, so it’s been a fantastic but scary ride. I hope everyone enjoys Justin’s stories and what we’ve done with Miles. I think we’ve tried to give him a voice that feels authentic to the character and his world.

Outside of being a superhero, Miles is an artist and we’ve seen him embrace his heritage as an important part of his art. Did you go through a similar journey as an artist?

Miles has an artist’s block in the beginning of Shock Waves, and by the end he realizes he needed to step back and look at the bigger picture. That’s a very normal thing in art: sometimes you just need to walk away and come back later with a fresh perspective. In my art journey, my culture and roots are deeply connected to my art and all my personal work, and something that I carry and bring to everything I work on as much as I am allowed to. I’ve made it my mission to bring a spotlight on Latinos, our culture, our indigenous representation, our roots, and our very real problems.

What’s your favorite part of working with Miles? What do you hope kids take away from his story?

The joy this character brings to so many people is probably my favorite part of it all. My hope is that the next generations become inspired to be the best version of themselves seen in media, and, my wishful-thinking dream is that by then we’re done having to fight this much to have proper representation in media, and hopefully in the future they’ll be able to tell their stories without going through all the hoops we’ve had to go through to do it. I don’t believe that the upcoming generations should have to suffer or go through the stuff we have to make things. Many people crawled so I could run, and I run so the rest can fly ahead. 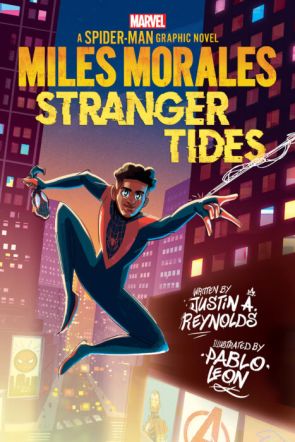 What are you excited to share with readers about Stranger Tides?

I’m very much enjoying younger readers discovering these stories and falling in love with these characters we crafted in the first book, and I’m looking forward to kids coming back for a second round of really fun, feel-good adventure stories.

Is there anything we haven’t asked that you’d like to talk about?

Working on a Spider-Man book, with Marvel and Scholastic has been a massive opportunity that I never dreamed would happen, and I’ve had a blast. It’s been very good for me, and I hope I can continue telling great stories, while also keeping the door open for the next generation of artists, and I hope their journey is filled with even more success.