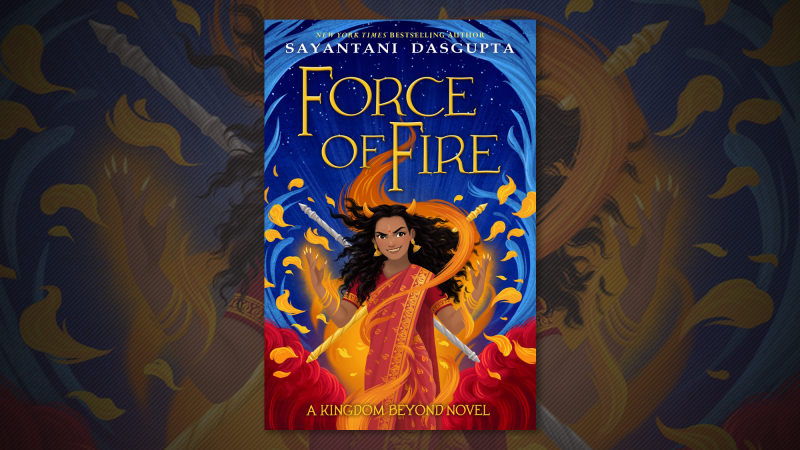 A Q&A with Force of Fire Author Sayantani DasGupta

As a Bangladeshi American, I’m always thrilled to read the Kingdom Beyond novels by Sayantani DasGupta because the stories promise me something I’ve rarely seen in books growing up: representation. These stories, centered around Bengali main characters and traditions, show us the importance of amplifying marginalized voices, and opening up new worlds to young readers.

Author Sayantani DasGupta sat down with us to chat about her upcoming title, Force of Fire, which releases on June 1st. We learn all about Pinki in Force of Fire, a fire rakkhoshi who hails from a long line of resisters. But how did the fierce Demon Queen come to embrace her extraordinary powers?

Read on for the author's thoughts on writing Bengali folktale-inspired adventures, the importance of South Asian representation in children’s books, and what young readers can learn from this story of resistance.

In Kiranmala’s storyline, Demon Queen Pinki looms large when it comes to wreaking havoc and saving the day. What compelled you to write about the rakkhoshi in Force of Fire?

Sayantani DasGupta: Sometimes, characters are very demanding of their authors! And as you can imagine, Pinki the rakkhoshi queen was very insistent on having her own story! I also had a bit of a soft spot for Pinki – who is fabulously terrible and terribly fabulous in the Kiranmala stories. She does horrible things, but she also loves her son fiercely, and even grows to admire Kiranmala.

As Ma tells Kiranmala in The Serpent’s Secret, “None of us is just one thing. Life is a process of learning to recognize our many faces.” And of course, that goes for heroes and villains alike. Pinki too isn’t just an evil-doer, she’s a complicated character, like anyone. Pinki is, after all, the one who knows the secret of the entire series – the answer to the question: Everything is connected to everything – but how? The answer of course, being love. Everything is connected to everything by love. And Pinki’s the one who knows that.

The Kingdom Beyond series seamlessly blends Bengali culture, history, and folktales with the plot. What does it mean to you to be writing books centered around South Asian characters and stories?

S.D.: When I was growing up as an Indian immigrant daughter in this country, I never saw myself represented in the stories I saw around me – not in movies, books, or television. Eventually, this narrative erasure made me feel like someone like me didn’t deserve to star in stories, that I couldn’t be a protagonist or a hero, even of my own life. It’s hard to be what you can’t see. It was Toni Morrison who said, “If there’s a book you want to read and it hasn’t been written yet, then you must write it.” And this is a big reason I wrote the Kiranmala books.

In the Kingdom Beyond trilogy, the stories Kiranmala’s parents tell her become like roadmaps – teaching her about herself and charting her path forward through her adventure. I chose to represent Bengali folktales in this way because I too am guided forward through my life by the cultural stories I’ve been told by my elders – these stories have taught me who I am and remind me from where I draw my strengths.

From the lavish feasts at the Raja’s palace to the delectable mishti (sweets) ever-present in Kiranmala’s home, the treats in the Kingdom Beyond books always leave us hungry! What inspired the food imagery?

S.D.: Hah! What’s a good fantasy story without fantastic feasts? West Bengal, the region of India from where my parents immigrated to the U.S., is well known for its milk-based sweets – rasagolla, sandesh, and more! (I was so pleased to see some of them featured on a recent season of The Great British Bake Off!). I think food, like stories, connects us all in very deep ways to our cultures and communities of origin. Food is like a magical memory thread that links us to where we come from.

What do you hope young readers take away from Pinki’s story?

S.D.: At the start of Force of Fire, Pinki wants nothing to do with revolutions or do-goodery. She only wants to learn how to control her fire power. When she makes a deal with Sesha, son of the serpentine governor general, to do just that, she finds herself slowly, and reluctantly, becoming a leader of her country’s struggles to free themselves of their serpent overlords.

Force of Fire is a novel about finding your voice, and not being afraid of your inner fire. Although Pinki thinks she wants someone to help her hone in and thereby control her power, she eventually realizes that the only way to really gain control over her fire is to fully embrace it. So what I’d love readers to take away from this book is a sense of their own power, their own voice, and their own ability to contribute to struggles against oppression, and for justice, in whatever way possible.

There’s a line from the Nobel Laureate Rabindranath Tagore that I loosely translate in the book as follows: If there is no light, if the path before you rages with dark, then light your own heart on fire. Be the beacon, Be the spark. I’d like readers to know that even in this sometimes unfair world, they are powerful enough to light the way toward fairness and justice. They can be a beacon, they can be the spark!

If you could choose, which species/creature from the Kingdom Beyond series would you be?

S.D.: Why, a fabulous fire rakkhoshi like Pinki, of course! Sometimes it’s good to be bad! 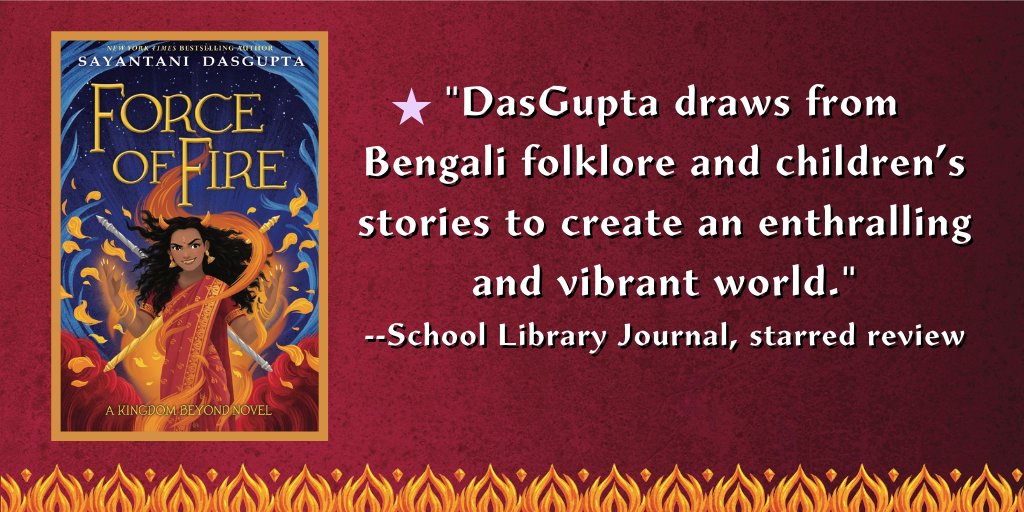 Learn more about Force of Fire here, and order your copy today!