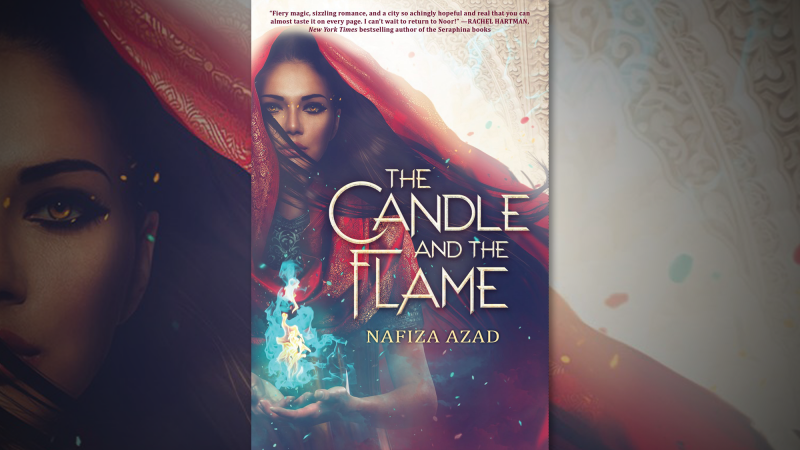 The power of names in The Candle and the Flame

It’s no secret that I love my folktales. As a result of a multicultural upbringing, I’ve been privileged to inherit storytelling traditions involving everything from fairytales to fables about rakkhoshes and jinns. So, I was thrilled to read a title that delves into South Asian and Islamic mythologies, and find different parts of myself blend together in a narrative.

The Candle and the Flame by Nafiza Azad follows the adventures of Fatima Ghazala in the fictional city of Noor, which is ruled by jinns. The concept of jinns—otherworldly creatures made of fire—may seem alien at first, but perhaps “genie” might sound more familiar? In the stories I’ve heard growing up, jinns have mainly been the antagonists, known to wreak havoc on people’s lives. Needless to say, I’ve internalized a healthy dose of fear for them and am thoroughly prepared to run away, should I ever find myself in a horror movie-esque situation. Azad’s novel however flips these notions and depicts them as unique as humans, and even gives them the power of name-giving.

Along with the deep-dive into jinns, I found many aspects of this story appealing: the discussions on women's equality, the diversity, the food imagery that made me crave Bengali street food; but like Fatima Ghazala, I was intrigued by the importance of names, which drives much of this narrative. Naming traditions are central to the story, because it defines character personalities and even informs people’s actions.

For example, the head of the Ifrit jinn clan, who rules over Fatima’s city, is honored by the title “Raees,” which means leader in Arabic. Now, I’d like to present the feminine version of the name/title Raees: Raisa. That’s me! Although I’m not a head of state or queen, I like to think I’ve achieved some qualities of my given name. Understanding the context behind the author’s choice of name and language made the reading experience all the more special, while drawing me further into the fantasy. After all, who wouldn’t imagine themselves the ruler of a mythical land after discovering that connection?

Now that I’m back to the reality of being plain old me, I can appreciate The Candle and the Flame for highlighting some of the amazing stories to be told about South Asian cultures. I can now safely attest that I’ve read a book about jinns and actually enjoyed it—my younger self would’ve been proud of that. I can’t wait to check out what Nafiza Azad writes next!