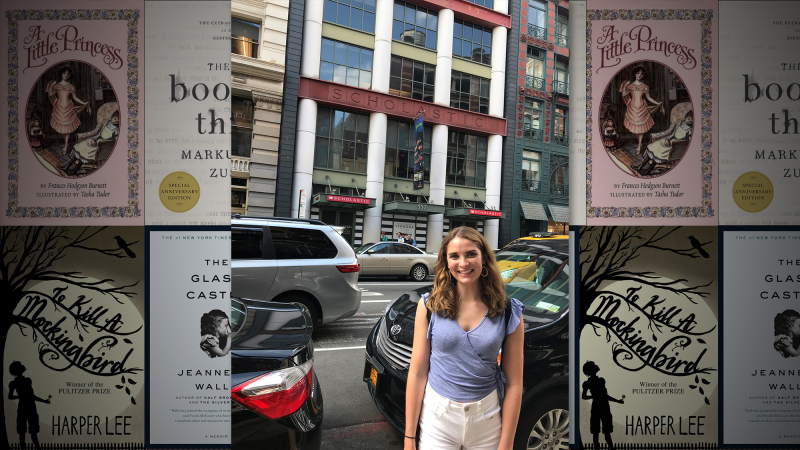 My Book Print: Fixtures on my shelves

Kim Devine is a Trade Marketing Summer Intern from College of the Holy Cross. Her Book Print—the five books that have shaped her reading life—is below.

I love to re-read books. It’s an opportunity for re-discovering and enjoying the details I overlooked in my first read—when I was too hungry to uncover the plot (I used to get in trouble for reading under the covers with a flashlight when I really wanted to know what was going to happen). No matter how many times I re-read my favorite books, I never remember every little detail. Certain voices and messages, however, have materialized stronger than others. Below are five books with author and character voices that persevere in my memory long after the first read.

The Harry Potter series will forever be the most beloved and re-read series on my shelf. It represents my love of reading; I could never start reading the new Harry Potter book and simply just put it down. The voice that ultimately emerged from my love of the series was not a wizard or witch’s but J.K. Rowling’s. Rowling is one of the first authors whose life I became invested in and intrigued by, and I learned that her path to success was anything but straightforward. In high school, I was assigned to read Rowling’s 2008 Harvard University commencement address, “The Fringe Benefits of Failure and the Importance of Imagination”—a speech I have since considered to be one of the most compelling pieces of writing I have ever read. Standing before the audience as an immensely successful author and addressing graduates with undoubtedly impressive accomplishments themselves, Rowling did the unthinkable: she spoke about the benefits of failure.

For any twenty-somethings who fear entering the “real world” and failing in one way or another (which I think is all of us, if we’re honest), I encourage you to listen to the speech and consider Rowling’s message. She argues that failure is inevitable, but should not be perceived as entirely negative—rather, failure is an opportunity to embrace inspired ideas and begin something new. Rowling conveys a message I hope to carry with me into my adult life: your résumé and accomplishments are what you’ve done, but they do not make up who you are.

The Book Thief by Markus Zusak

When a book is released and copies are placed in bookstores all over the world, I like to imagine that each individual book begins a journey to its final destination shelf. I believe a favorite book can emerge not only from the story it contains, but also from the memories that accompany the specific book sitting on your shelf. I have two copies of The Book Thief on my shelf. The first was given to me in middle school by my sister, an English teacher who had a knack for predicting what books would become best-sellers and encouraging me to read them right away. The Book Thief’s fascinating narrator, Death, immediately captivated me. While telling the love story of Liesel and Rudy set in the midst of a horrifying historical period, Death is cynical and emotional—and he openly expresses a universal concern for all writers: telling the story right. The second copy on my shelf was also purchased by my sister, more than ten years after the book’s initial release. She attended a meet-the-author event while I was in college and brought home a collector’s edition of the book for me signed by Markus Zusak. Shortly after this event, my sister suddenly passed away. The book on my shelf is now associated with personal memories of my own. It contains not only a tremendous story but also stands as a thoughtful gift from the person who passed her immense love of literature on to me. The author’s words have not changed, but events in my own life have altered their meaning. I will forever reread this special edition of The Book Thief, (one of several) favorite books my sister and I shared.

Frances Hodgson Burnett’s protagonist Sara Crewe is an only child born into a princess status and sent off to an all-girls boarding school—living a life of luxury until Sara is told that her father’s fortune is gone and he has died. I love this story more than any classic princess-meets-prince fairytale. Sara is depicted with the inner strength to handle her new life as a pauper—and that struck me as a more salient narrative. I believe what every child shares with Sara Crewe is the ability to imagine. Imagination is her coping mechanism; Sara imagines she still has plenty of food to eat and a warm fire in the hearth of the rat-infested attic in which she dwells. I once loved this book because my own imagination allowed me to feel like Sara and I were not so different. Now, I recognize that Sara’s tenacity teaches incredible lessons about behaving with dignity and respect, no matter the circumstances. Sara encouraged me to use my imagination and taught me that a child’s imagination truly is one of the most powerful tools.

The Glass Castle by Jeanette Walls

I found Jeannette Walls’ memoir The Glass Castle to be a tough read. It’s not the writing or vocabulary that makes it difficult—Walls embraces the voice of her younger self in order to properly convey the story—but the brutal honesty of the content. Walls does not idealize her life as a rags-to-riches story but captures the pain that was once her reality. I love Walls’ no-frills method of truth-telling and the symbolism of the “glass castle”, a representation of dreams so outlandish they are impossible to fulfill. In describing her impoverished upbringing, Walls challenges readers to think about what is uncomfortable. For that reason, I believe The Glass Castle is a necessary read: Walls provides an inside look at a demographic that is often unheard and overlooked. However, her memoir is not a call-to-action to end poverty or homelessness, but rather contains an impactful and empathy-provoking story. For me, her story stands as a reminder of two important lessons: We never know exactly what circumstances landed a person in their current situation, and we should always dream big but remain firmly planted in the rational confines of reality.

To Kill a Mockingbird by Harper Lee

My seventh grade teacher once told my class that if we were ever in doubt of who to write about for a timed essay, Atticus Finch should be our go-to character. Naturally, there is so much to learn from Atticus, a dedicated father and determined lawyer taking on a case he will likely lose. It is the voice, however, that has always shone through for me: Atticus’s daughter, Scout, whose narration exposes the audience to the plot through a child’s lens. Scout forces adults to find a balance between simple and complex in order to explain to her the events occurring in her hometown of Maycomb, Alabama. Like so many students across the country, I read To Kill a Mockingbird for the first time because it was assigned reading. I was struck by the glimpse into American history that it provided and the poignancy of Scout’s narration. I believe this book should continue to be widely read because its lessons are eternally relevant—fitting the true definition of a “classic” novel.