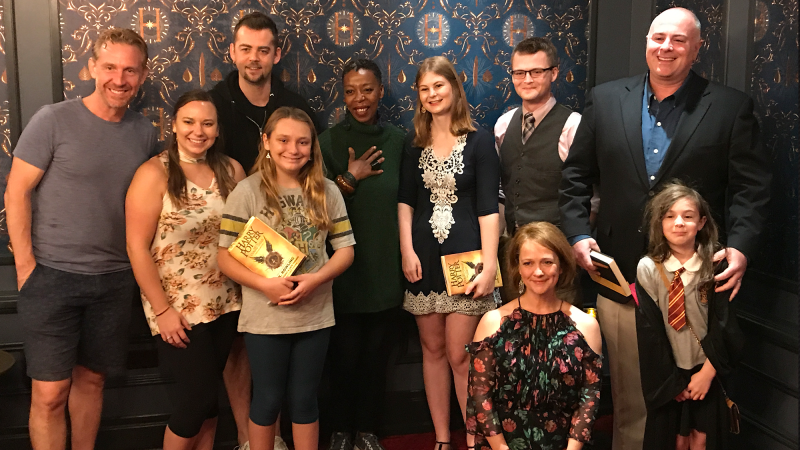 We've been celebrating the 20th anniversary of Harry Potter and the Sorcerer's Stone in the U.S. all year long, and this past weekend, we were so excited to spend time with the three winners of The TODAY Show's Ultimate Harry Potter Fan Contest!

The contest asked fans to share the line from Harry Potter and the Sorcerer's Stone that meant the most to them for a chance to win the ultimate Harry Potter weekend that included tickets to see "Harry Potter and the Cursed Child" on Broadway; a guided tour of Harry Potter: A History of Magic at the New-York Historical Society; lunch with Harry Potter publisher Arthur A. Levine; and more surprises, including the 20th anniversary collectible boxed set designed by Brian Selznick!

The winners also appeared on The TODAY Show this morning to talk about their experience! You can watch that segment here.

Here's what each of the winners shared about the line that meant the most to them from Harry Potter and the Sorcerer's Stone:

Abigail Syron, West Bend, WI: "To the well-organized mind, death is but the next great adventure."

I first read Harry Potter in 2001 or 2002 when I was 6 years old. As I was so young, my father read it as well to make sure it would be okay for me. When it came to this quote, I had trouble wrapping my mind around it. My father told me that while there was nothing wrong with me not understanding this line, it was an important one that stuck out to him, and that I shouldn't forget it and should keep trying to understand as I got older.

We got hooked — you could find us at every subsequent book release in our homemade costumes.

On August 12, 2016, my father passed away unexpectedly. As I reeled from the shock, I turned to what we had shared — Harry Potter. This quote jumped out at me, and I recalled my father's instruction years ago to remember that line. As I struggled with my grief, I found comfort in the idea that my father was not truly gone, but rather on his next great adventure.

The last year for my family has been tumultuous with my oldest daughter's brain surgery, the open and subsequent closure of our business and my wife losing her job.  My 8-year-old daughter suggested this quote and it fits perfectly as we have had to focus on the more important things; family, friendship and bravery.  Reading Harry Potter to her helped me focus on family in these tough times, but also sparked inspired her to improve her reading skills and inspired her to continue to be brave as she continues to recover from her procedure.  Starting to read Harry Potter to my daughter was one of the best parenting decisions that I have made to date!

This quote reminds me of my kind, 11-year-old daughter (who read all seven books when she was nine, five of which were during the summer). She has always been the girl who stands up for others when something is not right. I've had times where teachers have told me about these times. One instance is when the class was getting a new student, some of the kids were making fun of his name before he arrived. She said to them, Stop, it's not nice. How would you feel if someone was making fun of your name.She tries to do what's right to stop bullying, whether it's standing up to her close friends or kids she doesn't know.

It takes courage, bravery, and a whole lot of guts to stand up for what's right. It's hard when it's against someone you don't get along with but can be even harder when it's someone you are close to.

Here are some of the highlights from their weekend: The group is ready to see Harry Potter and the Cursed Child! They also received a guided tour of Harry Potter: A History of Magic at the New-York Historical Society. We surprised the winners with their own boxed sets of the 20th anniversary editions designed by Brian Selznick! Then, the winners appeared on The TODAY Show to talk about their experiences. And they capped it all off with a lunch with Arthur A. Levine, editor of the Harry Potter series!