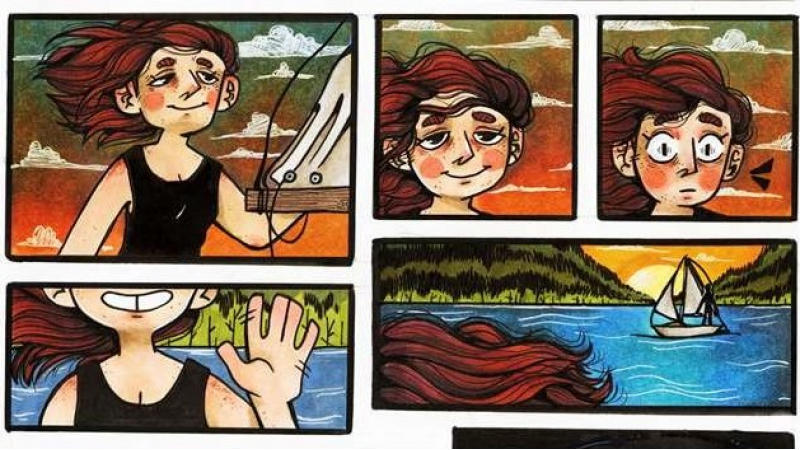 This week, we’d like to introduce you to Grace Gomez-Palacio from Columbia, MO and Hailey Petersen from Ramsey, MN. Grace’s nationally recognized writing portfolio, On Living and Afterwards, explores themes of nostalgia and loss through poems, short stories, and flash fiction. Hailey’s nationally recognized art portfolio, Facing the Issue, is a series of comics that challenge the viewer to experience what the characters in each panel are feeling, ranging from anxiety and isolation to depression.

Grace: My portfolio is just my six favorite pieces of writing that I managed to make in this past year or so; it was sheer luck that there ended up being enough of a common thread between them that I felt like they could confidently be called a portfolio!

Said common thread was that they all kept circling around three central inspirations: remembrance and nostalgia, my family or heritage, and a little practice I like to call wordsmashing, which is the highly sophisticated poetic technique of me shoving weird words that look cool together into a sentence and calling it a day.

On the whole, I’d like to think my portfolio is emotional the way that old record players are: I haven’t the slightest idea why or how it works, but I do like the way it sounds.

Hailey: My inspiration comes from a handful of things, colliding experiences, observations an insights on issues is all added into my work. I am a big fan of the horror industry and tend to have a dark side to my artwork. I care deeply about people and mental illness so I tend to draw the effects mental illness can have on a person. I want people to know that they are not alone, and that nothing is wrong with them. Mental illnesses are common, and I want readers that don’t have a mental illness to have an insight into what it is like for someone who does.

Grace: My favorite piece out of the whole portfolio is a poem called “remember me after i die as a girl who was careful with candles,” because it’s the most autobiographical thing I’ve ever written. It felt honest in a way no other poem had before, and writing it relieved a little bit of weight that we all carry around with us, in wherever you prefer to consider your soul residing. It’s not every day a poem does that for me, and even rarer is that I actually feel pretty proud of it regardless.

Hailey: Yes! My favorite work in my portfolio is called “Cold Nights” and it tells the story of a woodsman that finds a dog on his front porch. Though it is a slow and simple story, it holds a lot of meaning to me. The man is based on my grandfather. I made this comic when my grandfather moved up to the cabin all alone. About three years ago, my grandmother passed away along with my grandparents’ dog. My grandfather is a hardworking man who care deeply about his family, but I hate knowing that he’s all alone up at the cabin. 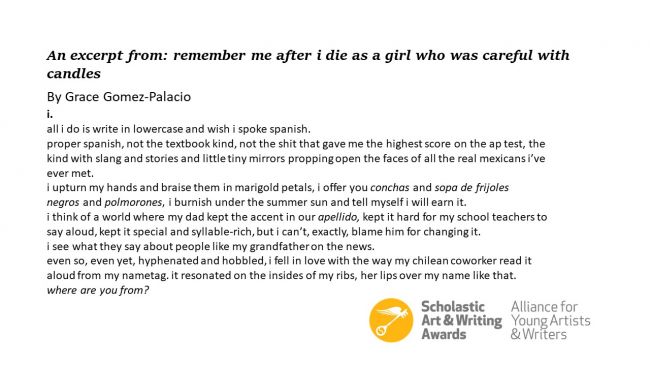 Grace: I got the pleasure to see Hailey’s comic called “Stalking.” The first thing that struck me were the colors—Hailey did an incredible job of setting and then rapidly re-setting the gorgeous, wilderness-gothic atmosphere in nine brief panels, and there was no way I could’ve anticipated that ending. Is the whole sequence just a dream? A metaphor? Just plain creepy fun? I honestly don’t know which interpretation would be my favorite, but I can absolutely tell why this comic earned a spot in a Gold Medal portfolio.

Hailey: I read Grace’s poem, “remember me after i die as a girl who was careful with candles.” The poem is incredible with the well expressed imagery when you read it. I felt that there was a bit of relatability in there for anyone who reads it. The three sections feel as though they are a different individual, and maybe they are! Explaining how each section of their life is something that may be small or different from others, but are a normal feeling to them. 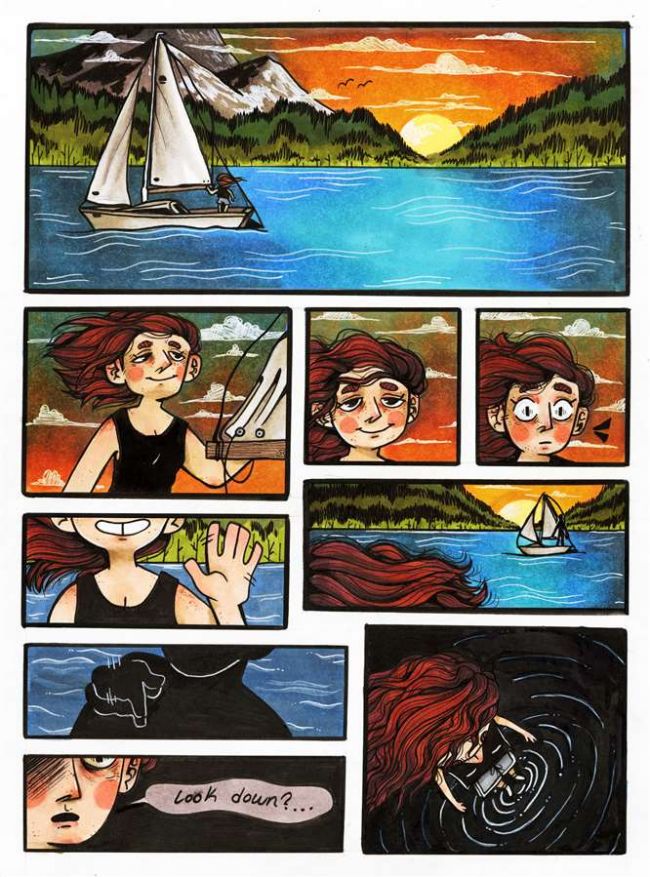 Grace: At the risk of sounding a bit basic, I’d love to sit down with Emily Dickinson! She was the first ever poet I really admired, and I love the sort of colloquial sense of mystery that she infuses her work with. I feel like I could learn a lot from her! Besides, even if the topic of writing never came up, I feel like she’d have some interesting stories to tell. I’d like to know who she really was.

Hailey: Jim Carrey. People know Jim Carrey for his acting career, but not everyone knows him for his artwork. I have grown up with Jim Carrey. He has helped me laugh when I didn’t want to and he makes me feel confident enough to express myself. When his acting career went quiet, I found out that he was painting. I watched a documentary as he expressed his love for being able to create art. It makes me happy to see that instead of giving up, he went to art. I would love to meet him one day just to shake his hand or ask him to a picture, as a reminder that I am not tied down to one path.

Grace: After high school, I’ll be taking a gap year off to volunteer and save up before heading to college! I’m still not totally positive on what I want to study, but I’m sure I’ll figure it out eventually.

Hailey: I will be attending Ringling College for art and design in Florida. There I will be working towards an illustration major and becoming a storyboard artist. I would love to work for a company like Cartoon Network, Pixar, or DreamWorks, but I wouldn’t mind working on new material or different shows like Rick and Morty. I’m a fan of horror and comedy, and I would like to make shows that represent that. I love to make people laugh when I can because let’s be honest, people’s laughs are the best. On the side, I would love to own my own little business selling funny shirts, stickers, pins, and weird looking stuffed animals. For the future, I just want to be happy and do the things I love.