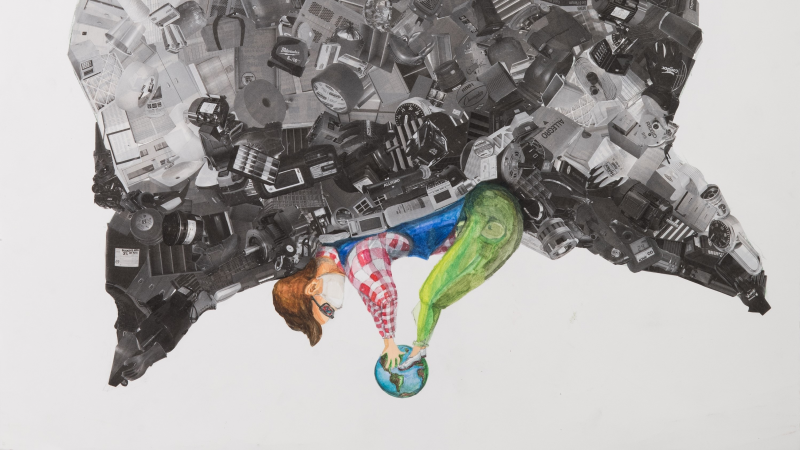 Up first are Esther Sun, from Los Gatos, CA, and Nathan Yang, from Los Angeles, CA. Esther’s writing portfolio, Chaconne Physics, is a collection of elegies, in remembrance of her grandparents, as well as victims of injustice around the world, that also blurs the boundaries between music and verse. Nathan’s art portfolio, Hints of Humanity, is a collection of mixed media collages that portray the effects of consumerism, technology, and radioactive waste on the environment.

Esther: At its core, Chaconne Physics is made up of elegies: both for my grandparents and for victims of injustice around the world. As a musical form from the Baroque era, the chaconne brings the central bass-line and harmonic progressions back again and again. I wanted to do the same with my portfolio with themes of grief, frustration, and powerlessness—reappearing in different colors and textures, but always remaining the same in essence.

Nathan: Creativity for me is a way to solve a problem by conveying my emotions and thoughts, and my means of expression are through my drawings, which exaggerate environmental issues. I see the direct consequences of environmental misuse for my generation, and I am dedicated to protecting our ecosystems. I communicate this through my art by drawing on environmental issues, such as pollution, effects of technology, consumerism, and radioactive waste, as a way to voice my opinions on this topic. I believe that art has the ability to show a new perspective to problems and help people connect to issues in a unique way. 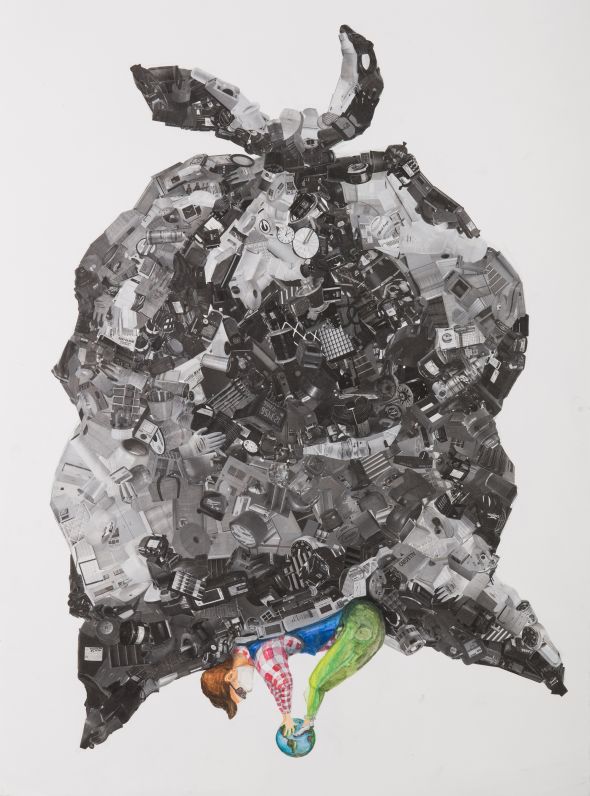 Esther: I definitely have different favorite pieces for different reasons, but one of them is the poem titled, “My grandfather dies on my last night in Iowa.” Of all of my poems about my grief for my grandfather, this one feels most open and raw to me, with its relative bareness and lyrical simplicity. Musically, this poem is heavily influenced by Chopin’s nocturne in C# minor, and so I’m happy with the way it turned out with the slow pace and delicacy of the images reflecting the slow sweetness of the nocturne.

Nathan: My favorite piece is called, “What are you looking at, Nathan?” which was created to emphasize the amounts of trash produced by someone. “What are you looking at, Nathan?” is my favorite piece because of the grandeur and the meaning behind the artwork: consumerism, pollution, and how careless humanity is when producing goods that come from nature. I wanted to show that humans produce enormous amounts of trash and that everywhere we go, the trash follows us like our shadows.

Nathan: I was able to read Esther’s poem, “Chaconne Physics.” I was impressed by the way she related music with her late grandfather.

Esther: I had the privilege of seeing Nathan’s piece “Trying to Save the World.” I was really impressed with the way he was able to convey this sense of precarity — the line between the stillness of balance and the motion of falling — in the two-dimensional form. The inversion of our usual notions of size, with the trash bag being the largest object and the Earth being smallest, is obviously really striking and contributed to my broader takeaway that “trying to save the world” involves realizing the magnitude and destructiveness of human industry’s waste production before people can effectively work towards sustainability. 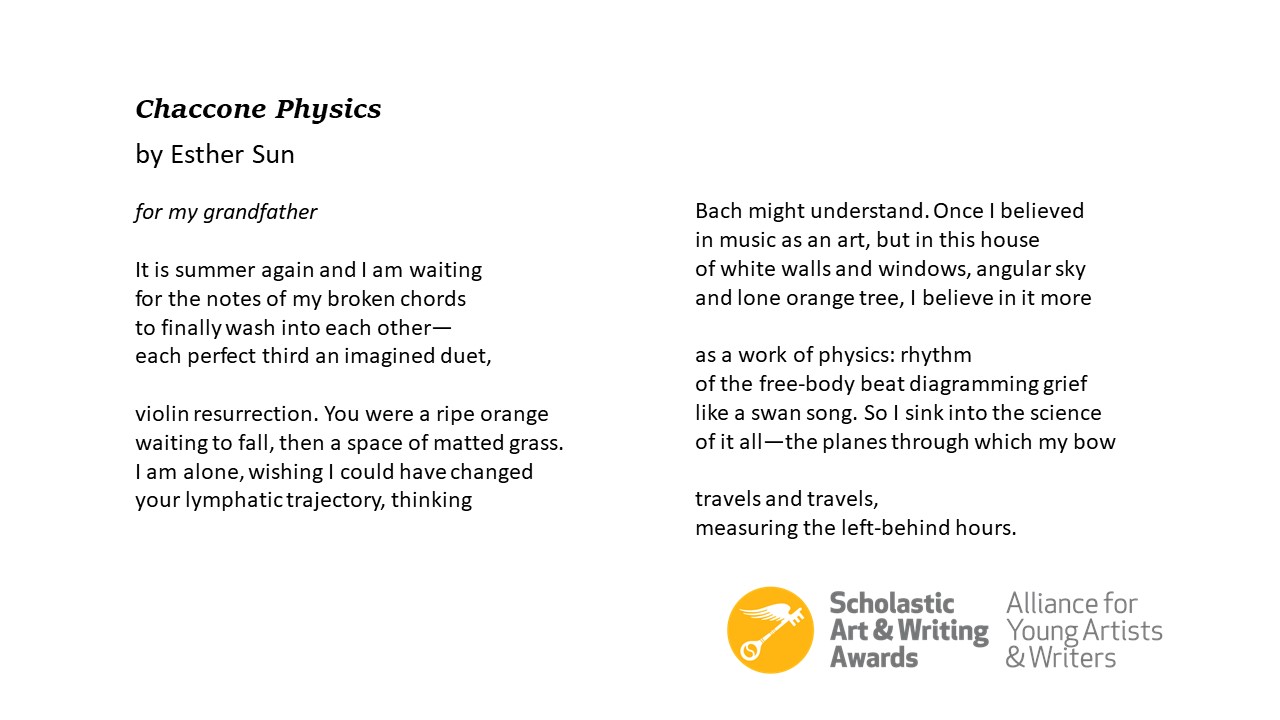 Nathan: It would be Gustav Klimt as I am imitating his art style. I really love his landscape paintings; for example, “Forest of Beech Trees,” “Farm Garden with Sunflowers,” and “Rose Bushes Under Trees.” I would like to talk to him about his upbringing to become a prominent members of the Vienna Secession movement and his patterns, naturalism, and unusual compositions.

Esther: In my efforts to write witness poetry, I’ve struggled with finding the right balance between my own voice and the voices of the people I’m writing about, as well as with the question of ethics regarding how much I can or should say about traumas I’ve never experienced. In light of this, I would love to talk with Tarfia Faizullah about her thoughts on the role of the writer in witness literature. How does she use language to deliver others’ stories and truths without unintentionally obstructing, distorting, or decorating them?

Nathan: My plans for the future are currently uncertain as I am waiting for college decision results to come out. However, I have been accepted to West Point and USC.

Esther: I’ll be attending Columbia University starting this fall and I plan on majoring in English. In the future, I hope to pursue some sort of career related to writing, such as journalism, but I also hope to explore a lot of interests in college and potentially discover different careers that can accompany and even inform my writing.