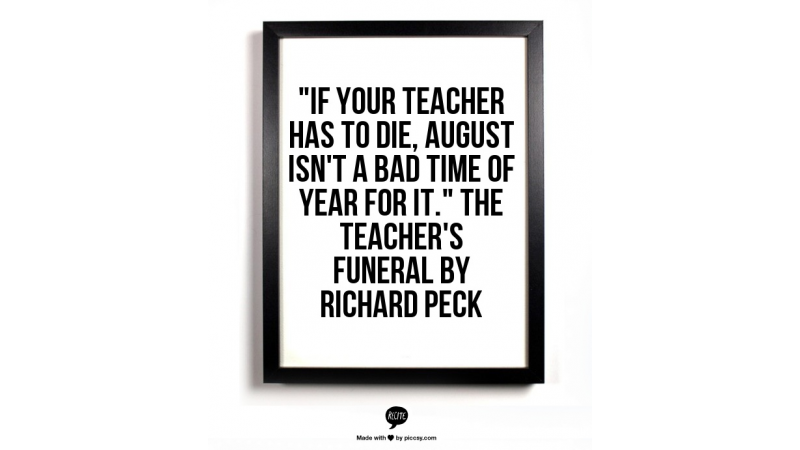 Just like people, books need to make a good first impression. Last week I was reminded of how important the first line of a book is while attending an author discussion with American novelist, Richard Peck.

You may remember Richard Peck from this first line, "If your teacher has to die, August isn't a bad time of year for it."  Peck immediately grabs his reader’s attention with this first line in The Teacher's Funeral. To this day, it’s one of my favorites!

Here are some of our other favorite first lines:

Morgan: “Mr. and Mrs. Dursley of number four, Privet Drive, were proud to say that they were perfectly normal, thank you very much.” Harry Potter and the Philosopher’s Stone by J.K. Rowling,

I love it because the voice jumps out at you ("thank you very much" cinches it!) but it's also mysterious enough (are they normal!?) to prompt me to keep reading!

Nadia: “Many years later, in front of the firing squad, Colonel Aureliano Buendía would remember that distant afternoon his father took him to see ice.” One Hundred Years of Solitude by Gabriel García Márquez

I read this book over 10 years ago, and this line still sticks out to me. It’s a powerful combination of something so violent paired with something so peaceful. It instantly transports you to Garcia Marquez’s magical world.

Brittany: "If you are interested in stories with happy endings, you would be better off reading some other book." A Series of Unfortunate Events by  Lemony Snicket, Daniel Handler

I loved this series when I was younger, and if this opening line doesn’t pique your interest, I don’t know what will.

And of course, our Librarian here at Scholastic, Deimosa, had a number of great first lines to offer:

“When Gregor Samsa woke up one morning from unsettling dreams, he found himself changed in his bed into a monstrous vermin.” Metamorphosis, by Franz Kafka

“Mr. Jones, of the Manor Farm, had locked the henhouses for the night, but was too drunk to remember to shut the popholes.” Animal Farm, by George Orwell

“When shall we three meet again? In thunder, lightning, or in rain?” Macbeth, by William Shakespeare

“I’m a sweating fat kid standing on the edge of the subway platform staring at the tracks.” Fat Kid Rules the World, by K.L. Going

“It’s a funny thing about mothers and fathers. Even when their own child is the most disgusting little blister you could ever imagine, they still think that he or she is wonderful.” Matilda by Roald Dahl