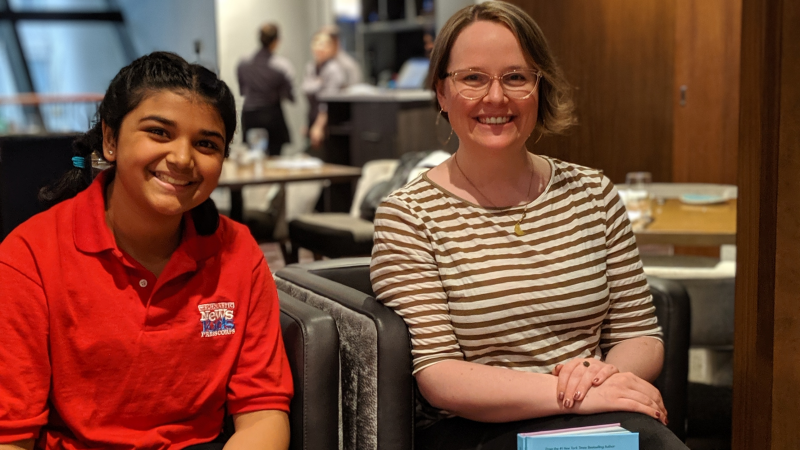 July has been an eventful month for the Scholastic News Kids Press Corps! Kid Reporters checked in from around the world to share the news stories that they felt passionately about this month.

These young journalists interviewed movie stars from The Lion King, author and illustrator Raina Telgemeier, and more. They also attended major events including the annual Detroit Grand Prix and the 50th anniversary gala for the Coretta Scott King Book Awards. Also, Kid Reporters talked with a safety expert on preparing for an earthquake and an Ohio student about her philanthropic efforts in Haiti.

Check out their amazing stories below!

At the Front Desk

A Milestone for the Coretta Scott King Awards

Storms and Top Speeds at the Grand Prix Behind Dog Man: The Musical

Kid Reporter Amelia Poor talks with the writer and composer behind the musical adaptation of Dav Pilkey’s beloved book series.

A sellout crowd packed Progressive Field in Cleveland, Ohio for the 2019 MLB All-Star Game and Kid Reporter Nolan Pastore got to talk with David James, MLB’s vice president of baseball and softball development.

Before Stephanie Grisham was named White House Press Secretary, Kid Reporter Ryan Stoltz asked her about her role as the First Lady’s spokesperson.

Preparing for the “Big One”

After the recent earthquakes in Southern California, Kid Reporter Annika Petras got tips from an expert on how to stay safe.

The Lion King Roars Back

Kid Reporter Jaxon Jones talks with stars from the photo-realistic adaptation of the 1994 Disney classic The Lion King, including award-winning actor John Kani. Cards, Comedy, and a Dash of Magic

Young magicians in Australia talk about their new show, “Now You See Us” with Kid Reporter Helen Hong.

The Art of Batik

The (Comic) Art of Storytelling

The Tragedy of a Sea Turtle

Kid Reporter Hana Meher Sadik attened a TEDxYouth event in India that encourages young people to share their ideas for making the world a better place.