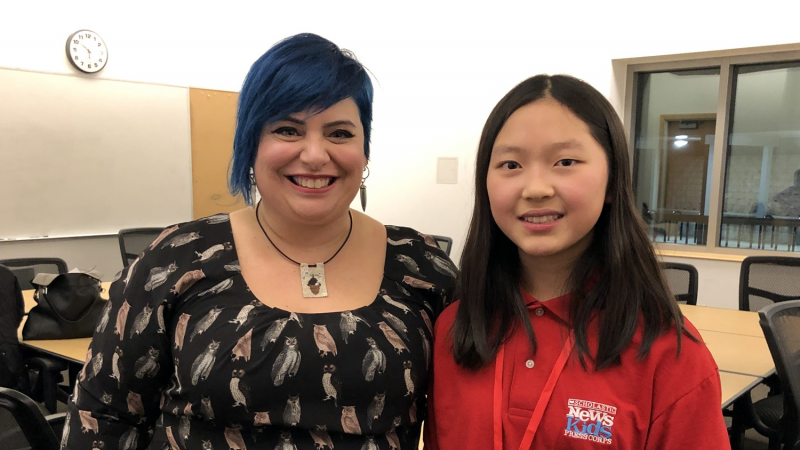 This month, Kid Reporters in the Scholastic News Kids Press Corps checked in from across the country and around the world to share the news stories that were most important to kids in their communities.

These young journalists interviewed best-selling author Holly Black, podcast host Guy Raz, and pianist Inon Barnaton; and took a closer look at the migration patterns of North American birds in addition to a documentary on the illegal shark fin industry.

Check out their stories below.

The Scholastic News Kids Press Corps is still accepting Kid Reporter applications for the 2019–2020 school year! Students ages 10–14 with a passion for telling great stories and discussing the issues that matter most to kids are encouraged to apply. All applications must be received by May 31, 2019.

A Musical Night to Remember
Kid Reporter Anya Kabra interviewed classical pianist Inon Barnatan about his passion for music and his practice habits. Finding the “Wow” in the World
Kid Reporter Lillian Jochmann spoke with journalist and podcast co-host Guy Raz about “Wow in the World,” NPR’s first podcast for kids.

Holly Black’s Big Imagination
Kid Reporter Teresa Fang spoke with Holly Black, best-selling author of The Spiderwick Chronicles about her career writing fantasy novels for young adults and the inspiration behind her work. Sharkwater Extinction
Kid Reporter Nikita Mohile takes a look at a new documentary that exposes the threat posed to sharks by the illegal shark fin industry.

Rise Against Hunger
Kid Reporter Andrew Raymundo learns about a global nonprofit that enlists volunteers to pack nutritious meals for people in need.

Combating Childhood Obesity in India
Kid Reporter Rohan Saketh Devulapalli spoke with a pediatrician about how kids can stay healthy and fit. Extreme Weather Hits Home
Kid Reporter Victoria Feng spoke with two experts about how climate change is behind the rise and severity of extreme weather events.

Avengers: Endgame Opens
Kid Reporter Alula Alderson attended the press conference for Avengers: Endgame, the epic conclusion to the Marvel Cinematic Universe that has enough thrills and plot twists to satisfy the most die-hard fans.

Preventing Shallow Water Blackout
Have you ever held your breath underwater? Doing so can be deadly, even for elite swimmers. Kid Reporter offers safety tips that could save a life.