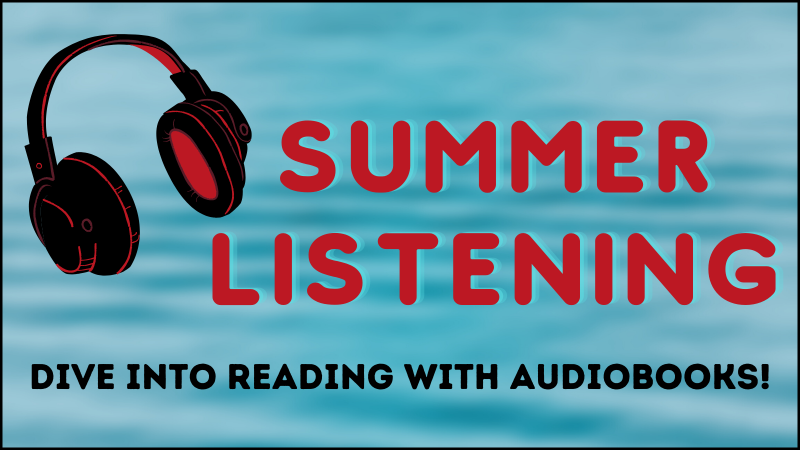 Join Scholastic for Summer Listening With These Incredible Audiobooks!

This summer we’re tuning in to some incredible reads. Join us for Summer Listening by downloading these incredible audiobooks, including some of our classic titles as well as new ones! Listen to the sneak peeks below and make sure to share your favorites with us on social by using the hashtag #SummerListening.

Scholastic Audiobooks · Be You by Peter H. Reynolds audiobook

Discover a joyful reminder of the ways that every child is unique and special, from the beloved creator of The Dot, Happy
Dreamer, and New York Times bestseller, The Word Collector. Here, Reynolds reminds readers to ""be your own work of art."" To
be patient, persistent, and true. Because there is one, and only one, YOU.

All Because You Matter

Scholastic Audiobooks · All Because You Matter by Tami Charles - Audiobook

My Very Favorite Book in the Whole Wide World

Meet Henley, an all-around good kid, who hates to read. When he's supposed to be reading, he would rather do anything else. But one day, he gets the scariest homework assignment in the world: find your favorite book to share with the class tomorrow. What's a kid to do? How can Henley find a story that speaks to everything inside of him?

The Adventures of Captain Underpants

Fourth graders George Beard and Harold Hutchins are a couple of class clowns. The only thing they enjoy more than playing practical jokes is creating their own comic books. And together they’ve created the greatest superhero in the history of their elementary school: Captain Underpants! His true identity is SO secret, even HE doesn’t know who he is!

I Survived the California Wildfires

In the 20th I Survived book, readers join eleven-year-old Josh as he leaves his New Jersey home for the rural northern California town where his cousins live. Still reeling from the life-changing challenges that propelled him and his mother across the country, Josh struggles to adapt to a more rustic, down-to-earth lifestyle that couldn't be more different from the one he is used to.

Josh and his cousin bond over tacos and reptiles and jokes, but on a trip into the nearby forest, they suddenly find themselves in the path of a fast-moving firestorm, a super-heated monster that will soon lay waste to millions of acres of wilderness and -- possibly -- their town. Josh needs to confront the family issues burning him up inside, but first he'll have to survive the flames blazing all around him.

The Earth is being invaded, but no one knows about it. When Jake, Rachel, Tobias, Cassie, and Marco stumble upon a downed alien spaceship and its dying pilot, they're given an incredible power -- they can transform into any animal they touch. With it, they become Animorphs, the unlikely champions in a secret war for the planet. And the enemies they're fighting could be anyone . . . even the people closest to them.

September 11, 2001, New York City: Brandon is visiting his dad at work, on the 107th floor of the World Trade Center. Out of nowhere, an airplane slams into the tower, creating a fiery nightmare of terror and confusion. And Brandon is in the middle of it all. Can he survive -- and escape?

September 11, 2019, Afghanistan: Reshmina has grown up in the shadow of war, but she dreams of peace and progress. When a battle erupts in her village, Reshmina stumbles upon a wounded American soldier named Taz. Should she help Taz -- and put herself and her family in mortal danger?

Two kids. One devastating day. Nothing will ever be the same.

King and the Dragonflies

Scholastic Audiobooks · King And The Dragonflies by Kacen Callender - Audiobook

It would be easier if King could talk with his best friend, Sandy Sanders. But just days before he died, Khalid told King to end their friendship, after overhearing a secret about Sandy—that he thinks he might be gay. "You don't want anyone to think you're gay too, do you?"
But when Sandy goes missing, sparking a town-wide search, and King finds his former best friend hiding in a tent in his backyard, he agrees to help Sandy escape from his abusive father, and the two begin an adventure as they build their own private paradise down by the bayou and among the dragonflies. As King's friendship with Sandy is reignited, he's forced to confront questions about himself and the reality of his brother's death.

Mia Tang thinks she's going to have the best year ever.

She and her parents are the proud owners of the Calivista Motel, Mia gets to run the front desk with her best friend, Lupe, and she's finally getting somewhere with her writing!

But as it turns out, sixth grade is no picnic...
1. Mia's new teacher doesn't think her writing is all that great. And her entire class finds out she lives and works in a motel!
2. The motel is struggling, and Mia has to answer to the Calivista's many, many worried investors.
3. A new immigration law is looming and if it passes, it will threaten everything -- and everyone -- in Mia's life.

It's a roller coaster of challenges, and Mia needs all of her determination to hang on tight. But if anyone can find the key to getting through turbulent times, it's Mia Tang!

As protestors roil the campus, National Guardsmen are called in. In the chaos of what happens next, shots are fired and four students are killed. To this day, there is still argument of what happened and why.

You Should See Me in a Crown

Liz Lighty has always believed she’s too black, too poor, too awkward to shine in her small, rich, prom-obsessed midwestern town. But it’s okay -- Liz has a plan that will get her out of Campbell, Indiana, forever: attend the uber-elite Pennington College, play in their world-famous orchestra, and become a doctor.

But when the financial aid she was counting on unexpectedly falls through, Liz’s plans come crashing down . . . until she’s reminded of her school’s scholarship for prom king and queen. There’s nothing Liz wants to do less than endure a gauntlet of social media trolls, catty competitors, and humiliating public events, but despite her devastating fear of the spotlight she’s willing to do whatever it takes to get to Pennington.

The only thing that makes it halfway bearable is the new girl in school, Mack. She’s smart, funny, and just as much of an outsider as Liz. But Mack is also in the running for queen. Will falling for the competition keep Liz from her dreams . . . or make them come true?

The Light in Hidden Places

It is 1943, and for four years, sixteen-year-old Stefania has been working for the Diamant family in their grocery store in Przemsyl, Poland, singing her way into their lives and hearts. She has even made a promise to one of their sons, Izio -- a betrothal they must keep secret since she is Catholic and the Diamants are Jewish.

But everything changes when the German army invades Przemsyl. The Diamants are forced into the ghetto, and Stefania is alone in an occupied city, the only one left to care for Helena, her six-year-old sister. And then comes the knock at the door. Izio's brother Max has jumped from the train headed to a death camp. Stefania and Helena make the extraordinary decision to hide Max, and eventually twelve more Jews. Then they must wait, every day, for the next knock at the door, the one that will mean death. When the knock finally comes, it is two Nazi officers, requisitioning Stefania's house for the German army.

With two Nazis below, thirteen hidden Jews above, and a little sister by her side, Stefania has one more excruciating choice to make.