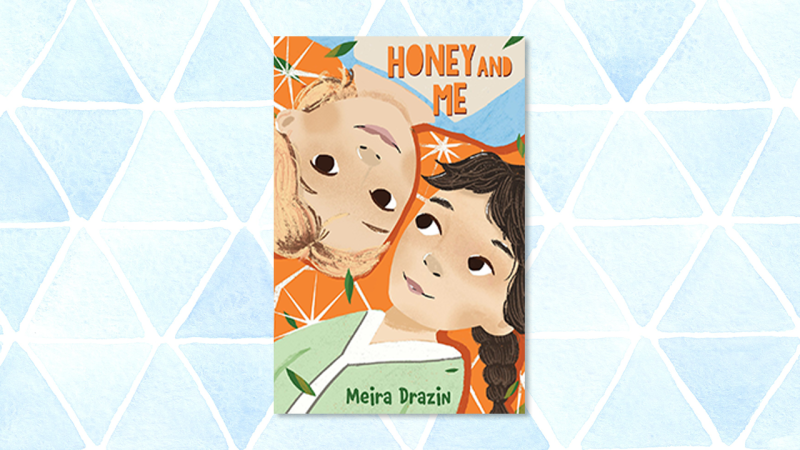 Jewish Joy by Meira Drazin, author of 'Honey and Me'

When I think of Rosh Hashanah, the upcoming Jewish New Year, my senses swarm with childhood memories: smooth velvet synagogue dresses, the smell of my mother’s honey cakes baking, our congregation’s voices lifted as one in song and prayer, the delicious anticipation of our big family meal after services, sweet honey drizzled on crisp apples and soft challah.

But growing up, the closest I came to seeing in literature anything vaguely familiar to my Modern Orthodox Jewish life was in the All-of-a-Kind Family series by Sydney Taylor, which takes place in the early 1900s, almost a century before my own childhood! Mostly, the only religious Jews I saw were in the Holocaust books I read over and over again—about hidden children, ghetto children, their way of life decimated, their families murdered. Although I am the granddaughter of four Holocaust survivors, thankfully my life in 1980s Toronto could not have been more different.

I strongly support the need for children’s Holocaust literature, and these books were a personal key to me understanding what my grandparents had gone through but never spoke about. At the same time, looking back, I see how hard it was to read over and over again about my people being victimized. Even today, the vast majority of mainstream books featuring religious Jews show them in the past, or as victims of persecution. And if set in present day, the narratives often focus on conflict—either Jewish people wrestling with their religion and community, or struggling against a dominant culture or religion.

When I first started writing stories for children, the psychological impact of not seeing myself reflected back in literature revealed itself. I copied the way other authors wrote: I sent my characters to regular public schools, not a Jewish day school; I had them dress up for Halloween, not Purim; no one celebrated Rosh Hashanah. I believed the scents, sounds, and sensations of the world I knew best weren’t legitimate enough to write about.

It wasn’t until I began to read to my children some of my own childhood favorites—Ballet Shoes, Anne of Green Gables, tons of Judy Blume, all the Ramona books, and All-of-a-Kind Family—as well as some new ones I was just discovering, like The Penderwicks and The Vanderbeekers of 141st Street, that I felt a shift inside me. I decided to try to do what these writers all do so beautifully—show the importance and magnitude of small dramas in everyday life—but with contemporary Jewish characters. I wanted to write a book about Modern Orthodox characters who have close friendships, difficult mother-daughter relationships, and influential teachers. I wanted them to encounter situations that are funny as well as sad. Above all, I wanted to write a book about a pair of friends who could be your neighbors and whose experience of their Judaism is joyful, and not in conflict with anything.

I have always felt that the biggest mark of success for Honey and Me will be if readers love the particulars of Milla and Honey’s daily lives, friendship, and escapades—and also find in it something universal, in which they see themselves, and their own joy, whether or not they identify as Jewish. Today, with antisemitism frighteningly on the rise, my hope is that Honey and Me can also offer an antidote to othering—the foundation of any racism, even when casual and unintentional—by bringing vividly to life characters whose religious practices may be foreign to many readers, but whose hearts, struggles, and humanity are the same.