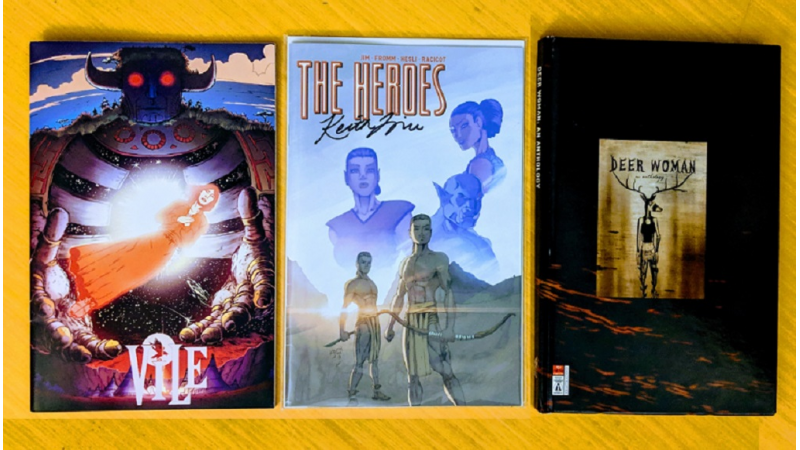 “One of the best ways to understand a people is to know what makes them laugh.” – Indian Humor, Vine Deloria Jr.

Always keeping this in mind, thanks to a college course I took titled 'The Native Intellectual', I was beyond excited to attend the third annual Indigenous Comic Con, held in the Pueblo of Isleta earlier this month. Organized by Dr. Lee Francis IV (publisher, editor, author, educator and leader), this year we were gifted ‘Electric Chaco’ (a VR experience based on Chaco Canyon), wrestlers (!), the Batmobile, and more. I was in, of course; I facilitate a comic book club that I founded with my students and colleagues at the Native American Community Academy. Lee had me at ‘Indigenous Comic Con’ when he put together the first one in 2016.

To begin with, the cosplay was next level, again. Next year I have to really focus on a good outfit instead of just dipping in to my t-shirt collection. For the record, I wore a t-shirt with a card catalog drawer on it that says “Never forget”, another with the wanted poster for Bellatrix Lestrange, last year’s Indigenous Comic Con 2 shirt, and a black shirt with Carl on it from The Walking Dead (then I ran into someone cosplaying him - and I almost cried). For me, the most fun outfits at ICC are frequently Native interpretations of Star Wars characters, and, since winning 2016 with a Navajo interpretation of Rey from The Force Awakens, fan art has sprung up around one of my former students – Dezbah Rose. This year I was walking the vendor floor, and within two aisles I’d already encountered and purchased my second piece of fan art based on her cosplay: a Navajo interpretation of X-Men’s Dani Moonstar that Dezbah stopped the show with in 2017. Fan art of cosplay; it’s so meta – I love it!

Speaking of former students, the time in NM was also an opportunity for me to catch up with several of them who have literally become the teachers. Some of the young men from the comic book club are now working at the school where I taught them (also meta!) – I guess that means we are colleagues? The funny part is, they still call me “Miss”. I don’t pretend that our comic book club, or my classroom for that matter, was where the seeds of literacy (and sequential art) were planted for all of these folks. However, I did my best to water them while they were under my watch! It feels full circle to pass on great novels like Eric Gansworth’s If I Ever Get Out of Here and Give Me Some Truth, and then hear back how they were used in the classroom, and all while someone in a Gryffindor ribbon shirt skirts past.

My favorite part of the Indigenous Comic Con however, and the number one reason why I recommend that you join me next time, is the Indigenous Futurisms panel. This year it was moderated by Rebecca Roanhorse, author of Trail of Lightning. This annual ICC conversation bridges science fiction, fantasy, gaming, language retention, dystopias and the potential for a robot-pocalypse. You think I am being silly, but there is actually a workshop at the conference titled “Surviving the Zombie Apocalypse: Rez Style” which was offered both this year and last. For context, the CDC itself has a zombie preparedness website. Great minds think alike!

At the end of the day, I was so caught up in conversation with the artists, writers, cosplayers, other vendors and attendees that I never saw any of the wrestling... or took a picture in the Batmobile! However, I did pick up a few ideas for programming, and I had a long conversation with two young women about living with a disability while at a residential college that will stay with me forever.

Next year I will definitely be back, however, if you can't find me... hopefully it is because my cosplay is so great that I am unrecognizable! Until then, check out some of the comics that I've added to my library as you close out American Indian and Alaska Native Heritage Month this November: