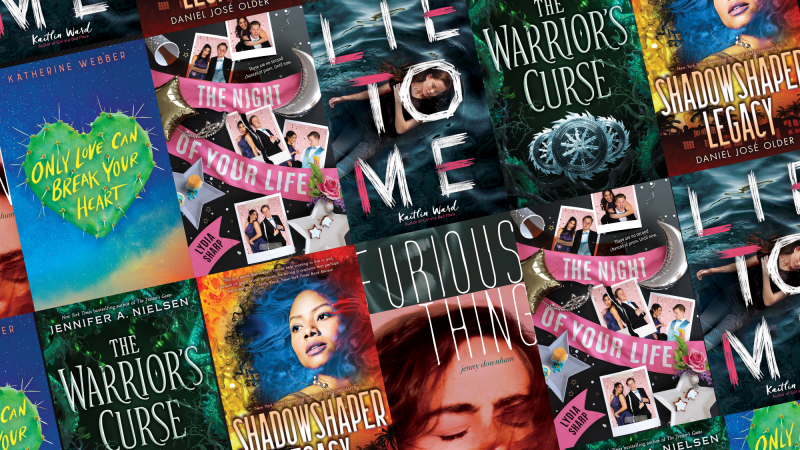 In case you didn't catch our friends over at I read YA revealing the covers that will be hitting shelves next spring, we've got you covered! See the 6 gorgeous covers below:

COVER REVEAL #1: FURIOUS THING by #JennyDownham! A powerful book about a girl who burns with anger for reasons she can't understand. She tries to control it but pushing her anger down doesn't make it disappear. How will she stand up when her sense of self is being whittled away? pic.twitter.com/zvlO7o5xYT

COVER REVEAL #2: LIE TO ME by @Kaitlin_Ward! In this #PointPaperback original thriller, Amelia wakes up from a near-death fall, sure she was pushed. When another girl falls and doesn’t survive, her fears turn deadly. If she doesn’t act fast, her next accident could be her last. pic.twitter.com/eQ7wDumBbg

COVER REVEAL #3: THE WARRIOR’S CURSE by @nielsenwriter! The conclusion to THE TRAITOR'S GAME trilogy is here! Simon and Kestra are hurtling down paths ever farther from each other as the battle for control of Antora rages. Is a common enemy enough to bring them back together? pic.twitter.com/6GIxVjnnVH

COVER REVEAL #4: THE NIGHT OF YOUR LIFE by @lydia_sharp! In this #PointPaperbacks original, JJ is having the worst prom of his life…over and over again. He’s stuck reliving his prom night until he gets it right—but can he escape from the loop AND get the girl of his dreams? pic.twitter.com/FOdCV5Aw9G

COVER REVEAL #5: ONLY LOVE CAN BREAK YOUR HEART by #KatherineWeber! As she deals with a deep grief, Reiko falls for the guy that nobody thinks she should be with. But will that be enough to help her? pic.twitter.com/USFMYdZ2GH

COVER REVEAL #6: SHADOWSHAPER LEGACY by @djolder! Get ready for the fast-paced conclusion to the Shadowshaper Cypher series, where Sierra Santiago and the shadowshaping crew return for a final showdown. pic.twitter.com/kzI74rHUR1

Fans couldn't get enough of these covers! Check out some of our favorite reactions:

Adding this one also to my TBR https://t.co/VKCV8i3TPL