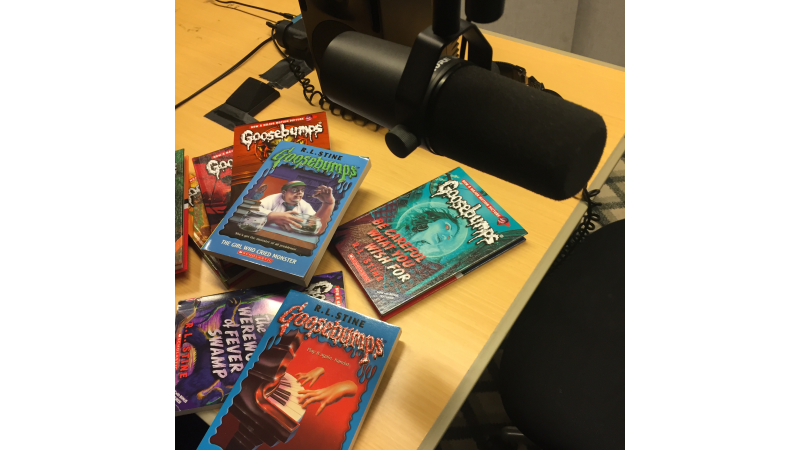 Last week, we released the 43rd episode of the Scholastic Reads podcast, "25 Years of Goosebumps." In this episode, I served as guest host with Suzanne McCabe. I got to talk with Goosebumps author R.L. Stine about the series, its 25th anniversary, and more.

Being a huge Goosebumps fan growing up, I took this opportunity very seriously. I soon realized that I had not read a Goosebumps book in more than 10 years (at least). A week before the recording, in order to prepare, I checked 15 books out of the Scholastic Library.

Checking out that number of books was optimistic on my part. In the end, I was only able to read eight. However, I learned a lot from those eight books! Here's what I read:

Now, here's what I learned looking back as an adult reader (SPOILERS AHEAD):

With the exception of the family dog in Welcome to Dead House, no one actually dies in a Goosebumps book. (They may be trapped in a parallel dimension or stuck as a plant, sure! But not *dead* dead.)

They're still funny, but in a different way

I definitely spotted the jokes for kids as I read. But there were other lines that made me laugh as an adult–mainly when kids were overdramatic about little things. In Welcome to Dead House, for example, when the lead character realizes that she'll never eat breakfast in her childhood kitchen again, she refers to the thought as MORBID. Now, I'm sure as a tween I would have had the exact thought if I were in the same situation, but to see it described as morbid was hilarious.

In the podcast, Stine mentioned how he loves to write bullies, and I can see why. They're scary even to adults! I can't remember being bullied too much growing up. But when one character punched another–I forget if this happened in Monster Blood or Say Cheese and Die!–I gasped and was shocked. In Stay Out of the Basement, a father turns into a plant and tells his children and wife not to worry. In The Curse of the Mummy's Tomb, parents leave their child alone in a hotel room in Egypt and fly back to the United States. It's only for a few hours until the boy's uncle shows up, BUT STILL! And in Welcome to Dead House, the parents get captured.

In Goosebumps books, adults can't save you, not even your own parents. As a kid, that's terrifying. As an adult, I stopped to think: Would I believe my kids (to clarify: I do not have kids) if they came to me with stories of monsters, demon dolls, and mummies? At 32, I'm officially part of the problem.

Slappy the Dummy was second banana in his debut

Slappy the Dummy is by far the most popular character to emerge from the Goosebumps series. But do you remember Night of the Living Dummy? Mr. Wood is the main villain! This shocked me; I didn't even remember Mr. Wood from when I read the book as a child! (Something else I jotted down while reading this book: "Never read ancient spells out loud." Good advice.)

They're quick and consistent

All of these books are around 130-135 pages. They are written at a 3rd to 7th grade level. The chapters are a few pages each, and most if not all the chapters end with a cliffhanger. It was easy for me to devour the books as a child, and as an adult.

On the podcast, Stine jokingly (?) said that the only thing for readers to "get" from the Goosebumps series was to learn to enjoy reading. Even if that's true, I think that's still a worthy achievement, and something all parents hope for when their child reads a book!

For more on R.L. Stine and Goosebumps, listen to episode 43 of Scholastic Reads wherever you get your podcasts!