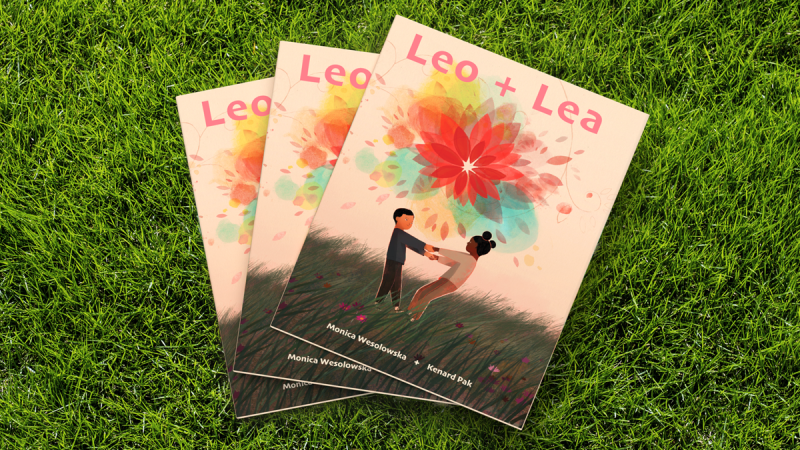 A Note from Monica Wesolowska on writing Leo + Lea:

Since childhood, stories have sustained me. Math, not so much. Then one day, I met a child who preferred numbers to words. What would that feel like? Could I write a story he might like? That was my challenge in writing Leo + Lea, a story based on a math pattern.

The pattern I chose, the Fibonacci sequence, has popular appeal. I was drawn to it because of its occurrence in nature. Flowers often have a Fibonacci number of petals. Fibonacci numbers also appear in the spiraling arrangement of many leaves and seeds. Because this pattern allows for natural growth, it seems a perfect metaphor for a budding friendship story.

With one word—Leo—I set in motion the story of a boy who only likes to count. After that first page, each subsequent page has only as many words as the next number in the Fibonacci sequence. Along the way, Leo meets Lea, a girl who only likes to draw, and together, the two friends discover a magical connection.

Fortunately, the Fibonacci sequence starts small and is easy even for young children to figure out. Starting with 0 and 1, you reach the next number by adding the previous two like this:

As you can see, the numbers get big fast. And they go on forever. Of course, they don’t go on forever in my story. Instead, they increase up to a climactic fifty-five words, and then they reverse, returning to a final page of one word, in a satisfying symmetry.

For some readers, the poetic text will offer a Fibonacci template for their own writing. For others, the luminous illustrations will offer patterns to explore. For still others, the combination of words, math, art, nature, and friendship, along with the story’s celebration of difference, will offer much more than Kenard Pak or I could have imagined on our own. I’m eager to learn how different readers experience this expansive world we’ve created together.

A note from Kenard Pak on illustrating Leo + Lea:

Creating the final art for Leo + Lea was as unexpected as it was interesting. Incorporating a list of numbers into the artwork seemed too literal, so I decided to try representing the Fibonacci sequence via proportions and shape arrangements—using the classic Fibonacci spiral overlaid in squares, rather than the sequence of numbers.

And I thought about colors: What if different hues and values could be put together like the sequence? From there, I learned about hex code designations, where a digital color has a kind of name made up of numbers and letters. Now that I had a color or a color series' code numbers aligned with the Fibonacci sequence, I had a palette. The colors were already there!

In the beginning, I colored things separately: number badges, clouds, trees, grass, and flowers. Then the colors made their way into full spreads. But I wasn't as happy with the art because it was dry and uninteresting. Once I began focusing on Leo and Lea, things began to click. After all, it's their story. At first, I drew them too realistically, so I simplified their designs and subtly adjusted all the colors around them. Down the line, I realized that much of the color selections had changed, especially towards the second half of the book, and that it worked for Leo and Lea's story. The art now progressed from the beginning’s simple palette to a more saturated, high-contrast selection of warm colors, which nicely echoed the plot build and reflected the characters’ blossoming friendship.

Fun fact, only one color made it unchanged from the original set of hex code colors to final art: turquoise.