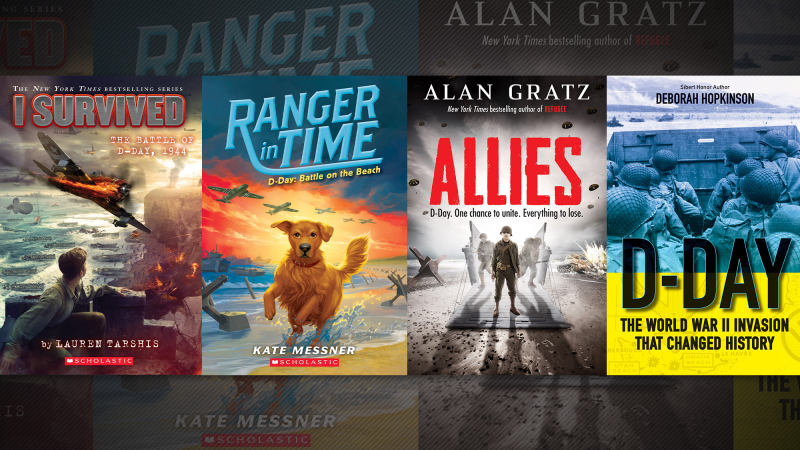 Honoring the 75th anniversary of D-Day in books

The invasion known as D-Day during WWII was the largest military endeavor in history. The Allied forces came together by land, air, and sea to storm German-occupied France on June 6, 1944, which changed the tides of the war. To honor the 75th anniversary of the event, we've rounded up a selection of books that capture the importance of the invasion.

D-Day: Battle on the Beach (Ranger In Time #7) by Kate Messner

In this adventure, Ranger heads to Normandy on the morning of the D-Day invasion and finds himself in the middle of one of the fiercest battles of World War II. Ranger meets Leo, a Jewish boy who is hiding with a local farmer, and Walt, a young African-American soldier fighting to free France from the Nazis. Walt is in the 320th Balloon Battalion, so it's his job to help operate the enormous barrage balloons that fly over the American troops, shielding them from enemy planes. It's pure chaos, with thundering warplanes, falling bombs, and exploding land mines. Will Ranger, Leo, and Walt survive? Sibert Honor author Deborah Hopkinson brings her signature action-packed narrative style to one of the most crucial battles of WWII.
The WWII invasion known as D-Day was the largest military endeavor in history. By June 6, 1944, Hitler and his allies had a strong grip on the European continent, where Nazi Germany was engaged in the mass extermination of the Jewish people. The goal of D-Day was the total defeat of Hitler's regime, and the defense of free democracies everywhere. Knowing they had to breach the French coast, the US, Great Britain, and Canada planned for the impossible.
D-Day was an invasion not for conquest, but liberation, and required years to plan and total secrecy to keep the advantage of surprise. Once deployed, Operation Overlord involved soldiers, sailors, paratroopers, and specialists. Acclaimed author Deborah Hopkinson weaves together the contributions of not only D-Day's famous players, but African Americans, women, journalists, and service members in a masterful tapestry of official documents, personal narratives, and archival photos to bring this decisive battle to vivid, thrilling life. I Survived the Battle of D-Day, 1944 by Lauren Tarshis

Lauren Tarshis shines a spotlight on the story of the Normandy landings, the largest seaborne invasion in history and foundation for the Allied victory in World War II. D-Day, June 6, 1944: the most expansive military endeavor in history.
No less than world cooperation would bring down Hitler and the Axis powers. And so people — and kids — across the globe lent their part.
From the young US soldiers in the boats to spies in the French countryside, the coordination of thousands came together.