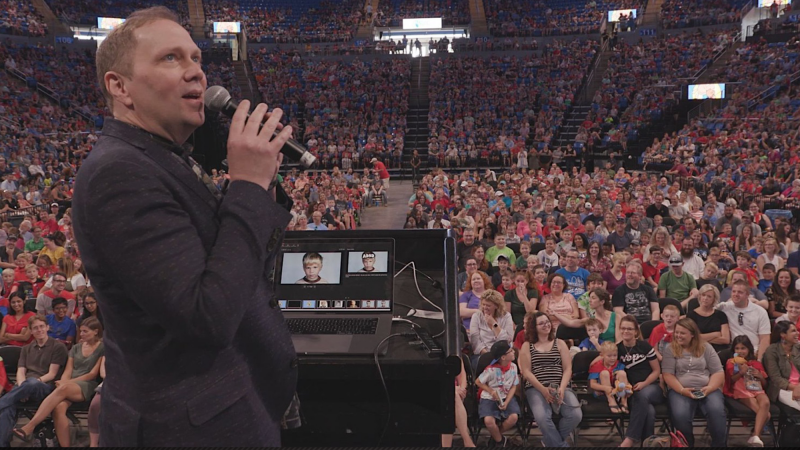 This fall, Dog Man creator Dav Pilkey is hitting the road on his global “Do Good Tour,” and we’re thrilled to share some highlights from the events!

The “Do Good Tour” is bringing together kids, families, and educators to highlight the many ways books inspire, and how each individual can help others make a positive difference wherever they are. Hosted by bookstores and key community partners, all of the events have a “do good” component to support non-profit literacy organizations, local charities, military families, schools, and libraries in underserved areas.

The tour kicked off in Jackson, Mississippi, where Dav spoke with nearly 5,000 public school students!

Elementary students from every zone of MCS hit the jackpot this morning with a special visit to hear author Dav Pilkey. Thanks to @msbookfest sponsors, EVERY student received a book & gift card to @LemuriaBooks! #MarkofExcellence #MovingTheMark #MotivateEducateGraduate pic.twitter.com/3hNEA8iShe

He then served as the featured “kidnote” author at the Mississippi Book Festival — check out this fantastic crowd!

Kids of all ages were on hand to see Dav Pilkey speak at the Mississippi Book Festival in Jackson Saturday morning. The excited crowd showed off new copies of Pilkey’s latest in the Dog Man series. @msbookfestival #msbookfest #Mississippi #MPBOnline pic.twitter.com/EX8djbbNa6

He met tons of amazing people, including Justice Sonia Sotomayor! Then it was off to St. Louis, where Dav spoke to a sold out crowd of more than 5,000 fans at Chaifetz Arena about positivity, practice, and persistence!

The Beaugard kids went to their first author lecture/reading/performance/meet and greet/signing today! They waited FOUR hours to be photographed with Dav Pilkey!!! But... Dav loved Jamie’s costume and his wife even snapped a pic of it for him!! #todaywasagoodday #davpilkey #dogman #dogood #mrstateontheweekends

Today was totally awesome!!!!! @petey_haw_haw @dav_pilkey #dogoodtour #dogman I’m grateful my son heard how a supportive mother can change your whole outlook on life! Cross our fingers and hope we win a raffle!

Next, it was off to Short Hills, NJ, for an event at Indigo Bookstore!

Thread: Today, I took my #ausome boy to meet #DavPilkey. Staff at the bookstore took the photos, and as this one was being taken, I started to tear up. What brought me to tears? These were the books that my boy could read and enjoy on his own for the first time. pic.twitter.com/QeoqpJSPep

I could not capture in a picture the huge number of kids today at @halfpricebooks #DavPilkey #Dogman #DoGood tour, but seeing all those kids in their capes, sitting in a packed auditorium with books open in their laps, was incredible. 1/ pic.twitter.com/v4KJcY44AV

It was so heartwarming today to see so many parents support their children as readers of graphic novels! Thanks #davpilkey for writing great books for kids to enjoy!! #graphicnovels #eatreadlead @halfpricebooks pic.twitter.com/lrDA3KXhJI

Read about one librarian and mom's experience at the event here! She described the event as, “…inspiring and rewarding and comforting and meaningful…Because Dav Pilkey was willing to share his truth with these kids, a lot of kids got exactly what they needed to live their lives with a little more hope and belief in themselves. Dav Pilkey is now one of my favorite people, to be honest. I saw first hand what he meant to these kids and it was powerful and transformative.”

The bookstore created a "Do Good" wall where attendees were invited to share how they will do good!

How will you do good? When B wrote his post-it, I got teary-eyed. Two ladies we do not know watched B place his on the chart, and one said to the other-"Pretty impressive and thoughtful response." The other said, "Yeah, kinda gives me hope for the future." Could not have been more proud to be raising a #kindkid #bekindgpisd @grandprairieisd #dogman #dogoodtour #davpilkey

Then it was off to Dav's home state of Ohio for the Cartoon Crossroads Convention! Bone creator Jeff Smith introduced Dav on stage

Check out all these excited kids!

Your libraries, bookstores, teachers, librarians, caregivers, and, of course, Dav Pilkey, have fostered lifelong readers. Your work may not always be recognized, but know you are making an impact.

Let me share a story about persistence the whole summer my son has been showing this picture to everyone and anyone that had eyes. He would say I am going to meet Dav and show him my picture. He would even send letters to this man about his ideas. He stayed positive and hopefully. This weekend he got to meet his favorite author and show his picture one last time to the man who inspired him to draw it. Have faith like a child. Believe in your dreams even if no one else will.@#davpilkey

#DogMan creator Dav Pilkey is getting ready to take the stage in Minneapolis! Here he is drawing a special illustration for @RedBalloonBooks #davpilkey #dogood pic.twitter.com/ZLcXXCTqLR

Tra-la-la!!! Dav Pilkey is a super hero rock star. His books, his message, his generosity . . . the power of Dav Pilkey is real!
Thank you @theLibraryBug! pic.twitter.com/vj491bRRCk

Cool opportunity for my #dyslexic boys to meet Dav Pilkey, who also happens to be dyslexic & #ADHD. His books have been huge throughout the years while they overcame their #Reading challenges. He provided a strong message about Positivity, Practice and Persistence. Thank you! pic.twitter.com/msazKZu2Lm

Next, Dav went to Washington, DC for the “National Book Festival Presents Dav Pilkey” events hosted by the Library of Congress.

DC area students had a howling good time today at the Library during a special appearance by “Dog Man” series creator Dav Pilkey. Many thanks to Dav for sharing his story of positivity, persistence, & practice, as well as giving away some drawings to lucky fans! pic.twitter.com/RqV9j2cHpa

Wait ... do we have a new @LibnOfCongress?
Thank you to #DogMan and #CaptainUnderpants creator Dav Pilkey for bringing so much joy to hundreds of DC area kids during his visit to the @librarycongress. Harness your inner super hero through reading! pic.twitter.com/iFELDbsi1M

We spent a memorable night at the @librarycongress for the #dogman #dogood Campaign. . At a night when reading was celebrated, my family was most honored to hear Dav Pilkey’s inspiring story. What struck me is how genuine and kind #davpilkey was in everything he did throughout the night. He is a great ambassador for the love of reading. . The US tour dates for this campaign are sold out, but hopefully Dav and @scholasticinc will plan more campaigns like this in the future! . And we are still in awe of the gorgeous @librarycongress . It was beyond breathtaking...plus it has ongoing #familyfriendly exhibits. Currently, the library is showing Comic Art, with everything from @snoopygrams to @superman ! . It would be safe to say that if you plan to @visitwashingtondc , going to this hidden gem right by the @uscapitol and US Supreme Court buildings would be a trip highlight! . This night was part of the #nationalbookfestival Presents series. Throughout the night, special activities were planned for this particular venue including a performance from #dogmanthemusical featuring the original Off-Broadway NYC cast! . Be sure to check out my stories! Believe it or not there are a lot more things to share from this amazing night! . Is there an author that your kids would love to meet? . . . . . . #stadiumswithmysons #libraryofcongress #visitdc #mydccool #districtofcolumbia #captainunderpants #readinggivesyousuperpowers #scholastic #bookjoy #raiseareader #americanlibraryassociation #somanybookssolittletime #politicsandprose #downtowndc #igdc #familytravelblog #unitedstories #_iloveusa #trekarooing #gowithnugget #visittheusa Guess who made a special appearance at the Library of Congress? The original cast from Dog Man: The Musical! Such a great performance enjoyed by all. And Dav was even treated to a special exhibition of original artwork of Peanuts by Charles Schulz (Dav’s childhood hero) curated especially for the event! Next stop: Dav went to North Carolina for a school event in Fort Bragg. The Fayetteville Observer ran a story saying “Positivity, practice and persistence are the message that an award-winning author shared with Fort Bragg students this month.”

Then it was off to California to visit more sold-out events where Dav appeared to crowds thousands who came to hear his message about the importance of doing good!

Last night we had the opportunity to meet children’s author, Dav Pilkey. Through his books such as “Dog Man”and “Captain Underpants” is how my son found his love for reading. It was quite an experience listening to him speak about his own childhood struggles with school, dyslexia, and adhd. The stories Dav told mimicked some of the same struggles my son has dealt with over the years. My son lit up when Dave talked about having his desk moved into the middle of the classroom separated from the rest of the kids, since that happened to him too! . Dav is such an great role model for kids with learning differences to look up to. I especially loved his message of how to take a bad or difficult situation and ask yourself “how can I turn this into something good”. Now, if these messages actually sunk in to my kid’s heads is yet to be determined. But a mother can hope right?! #momlife #davpilkey #dyslexiaawareness . . . . . #dyslexia #dyslexic #adhdawareness #dogman #bayareamom #momoftwokids #momofboth #momlifebestlife #realmomlife #realmom #momliferocks #stayingblonde #learningdifferences #readingismysuperpower #motherhoodunfiltered #motherhoodunplugged #captainunderpants #lovingtoread

Ridiculously A+ day in Santa Cruz today! Kiddo had a transformative experience meeting one of her favorite authors, who had a surprisingly moving, heartfelt and unsurprisingly hilarious presentation. He and Ina have a lot in common and she was beyond mesmerized and uplifted by it! Sah-weeeet! Parenting self-high-five! Thank you @dav_pilkey @petey_haw_haw for helping atypical kiddos see that what makes them different is actually their superpower! #captainunderpants #dogman #davpilkey #neurodiversesquad

#sundayfunday So fun to go to the #DavPilkey #Dogman #DoGoodTour. Love how he shares how he turned around the struggle and negativity of being diagnosed with #ADHD and #dyslexia (and being poorly treated by his elementary school teachers) into The #CaptainUnderpants series. Special guests #DanSantat (author and illustrator of Beekle) and #GaleGalligan (graphic novel illustrator of the newly updated series of The Babysitters Club). They showed their drawings from a young age and talked about how reading and drawing were their passions growing up and they all drew pictures on stage. So fun! Thank you for an inspiring day! Pilkey’s message of his 3 P’s applies to everyone! #positivity #practice #persistence #beasuppabuddy #familytime #mommySLP #specialeducator This culminates the U.S. stops of the tour. Next stops in Shanghai, Singapore, and Mumbai!