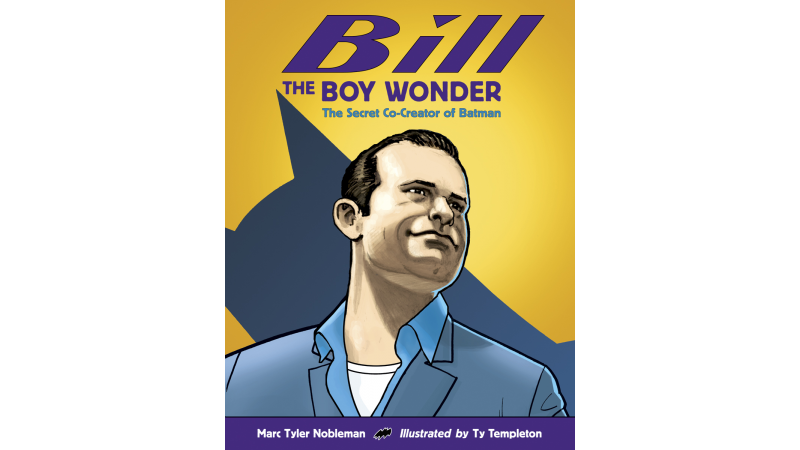 The hero we deserve

Last month, in my comic book club, we were sharing lists of our top five favorite characters, and my five are mostly from the DC universe. The lone non-DC entry is Rorschach (Watchmen), and my number one is Batman – who is celebrating the 75th anniversary of his 1939 Detective Comics bat-debut today. Approximately one month after making that top five list, a book came across my desk to catalog that ROCKED my world – Bill the Boy Wonder, by Marc Tyler Nobleman. I didn’t know about Milton Finger, the man who designed the iconic Batman costume and wrote the stories that introduce many of the beloved sidekicks and villains that populate Batman’s stories. Specifically, I was impressed by the comic book style presentation of the facts in Nobleman’s book, and his use of primary sources brings a tear to the eye of this librarian! It’s a great nonfiction title to use in the classroom, considering the Common Core; there are comprehensive author’s notes and a bibliography. Seriously, though, I have to admit – I cried (beach scene, page ~35).

A specifically cool part of the bat-universe, for me, is Barbara Gordon, daughter of Commissioner Gordon, better known as Batgirl. Librarian, hacker, and technology guru, (as a civilian) Batgirl has a doctorate in library science, is head of the Gotham City Public Library, and was elected to Congress. In fact, Business Week listed her as #8 on their list of the top ten smartest superheroes! What more can you ask for in a comic book heroine? Well, Barbara Gordon has also been a prominent disabled character, depicted in a wheelchair after suffering a spinal cord injury at the hands of the Joker. With intelligence as her defining characteristic, in these story arcs she serves as the go-to information specialist for superheroes in her role as the Oracle.

There are literally hundreds of wonderful bat-things that I could reflect on here. I loved Batman the Animated Series, and I am excited for the upcoming Gotham television show and Son of Batman film. I thought Will Arnett did a great job in the LEGO movie, and, as you can see, I took a picture with the giant LEGO Batman when they had him in the Scholastic Store downstairs. But the basic truth is that when I was growing up my dad would put a Batman comic book down on the table, and tell me to read it so that we could discuss. As recently as Monday, we were going through a box of comics that survived Sandy (the water came within an inch of the tops – thank goodness they were bagged and boarded!), and I walked away with assigned reading, which includes several Shadow of the Bat titles that I somehow missed in the 90s. Reading Batman with my father is a defining bat-experience in my reading journey, and it has served me well in my bat-career.

Happy Birthday Batman, and thank you Milton Finger - for giving me the hero that I needed!

10 Benefits of Having a Library Card