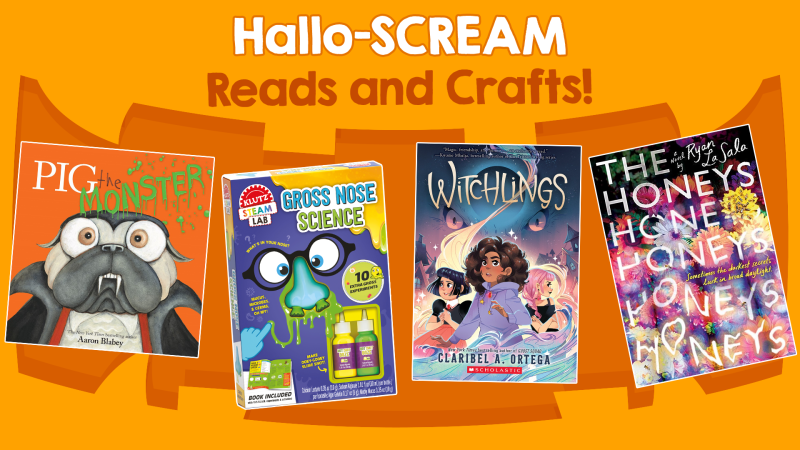 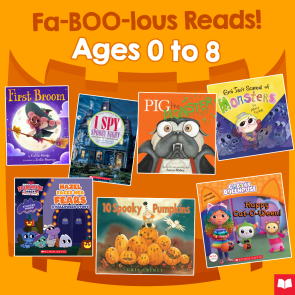 Little witch is so excited by her new present for Halloween night — a new broom! But learning to fly a broom is harder than you think, especially when you're just a little witch.

Part of the classic I Spy series, kids of all ages will enjoy a fun and spooky exploration as a trickster skeleton beckons readers from room to room to I Spy for mice, spiders, candles, bats, jack-o'-lanterns, bones, and so much more!

Emi is hilarious bedtime picture book about what it means to show bravery in the face of the creatures that go bump in the night!

Written and Illustrated by Gris Grimly

One little girl joins goblins, ghosts, witches, and more in this rhythmic, spooky countdown, traveling through the countryside and discovering more Halloween creatures along the way. It’s an unforgettable Halloween adventure!

Pig, the world's greediest pug, is on the rampage for TREATS! TREATS! TREATS! But don't even think about being stingy with the goodies, because this candy-fueled glutton has some terrible tricks up his sleeve...

Favorite preschool character Hazel the cat learns to overcome her fear of spooky things in this Halloween storybook with Suki the hedgehog, Axel the raccoon, and Tibor the hippo. This storybook, based on the adorable preschool show now airing on Hulu, teaches youngsters that spooky things can be fun! Includes a sheet of stickers and punch-out cards for extra fun!

Join Gabby and the Gabby Cats for a Halloween adventure in this 24-page storybook! Based on the adorable preschool show Gabby's Dollhouse, streaming on Netflix. 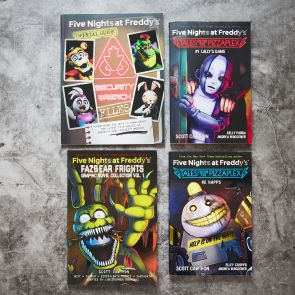 Tales from the Pizzaplex

What do you wish for? Oswald wishes his summer wasn't so boring. Sarah wishes to be beautiful. And Oscar wishes to get his hands on the mechanical toy that's out of stock all over town. But in the twisted world of Freddy's, their hearts' deepest desires have an unexpected cost.

Take a deep dive into the newest Five Nights at Freddy’s game with this must-have guide including the newest animatronics, detailed maps, and never-before-seen easter eggs to take your gaming to the next level. Whether you’ve been playing since the beginning or only started with Security Breach, learn the secrets of the Pizzaplex trade with this crucial new guide for fans!

With over 100 pages chock full of new content exploring Help Wanted, Curse of Dreadbear, the Fazbear Frights series, the novel trilogy, and more, this exhaustive guide covers all the lore, most talked-about topics, and secrets any fan needs to know.

Five Nights at Freddy’s How to Draw

From Freddy to Bonnie to Chica, learn how to draw your favorite horrifying animatronics with 96 pages of step-by-step fun perfect for any fan of the horrific Freddy Fazbear’s Pizza game!

Get your hands on this scare-filled box set of the New York Times-bestselling book series, Fazbear Frights, including a new-in-print twelfth book, Felix the Shark! Perfect for gifting to the horror fans in your life, it will keep readers occupied for months to come. 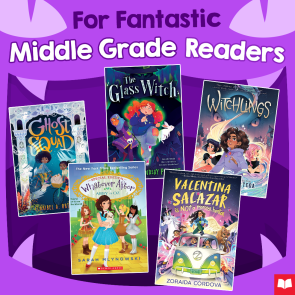 With action-packed adventure, a coven of quirky witchlings, Claribel A. Ortega's signature humor, and girl-power vibes, you won't be able to put down this middle-grade Latine witch story, perfect for fans of Amari and the Night Brothers or Harry Potter.

Shortly before Halloween, Lucely and her best friend, Syd, cast a spell that accidentally awakens malicious spirits, wreaking havoc throughout St. Augustine. Together, they must join forces with Syd's witch grandmother, Babette, and her tubby tabby, Chunk, to fight the haunting head-on and reverse the curse to save the town and Lucely's firefly spirits before it's too late.

Adelaide Goode, the weakest witch born to the Goode family, is being abandoning her in Cranberry Hallow, where she has no friends at all, for three whole months! With the aid of a monster-obsessed neighbor and a twitchy-nosed, furry friend, Addie must hunt down the ingredients necessary to break a family curse before the stroke of midnight. And if she doesn’t…she might just erase magic from her family, and her town, forever.

Whatever After: Abby in Oz

Abby and her friends enter the magical Land of Oz... with hilarious and empowering results! They meet Dorothy and Toto, the Wicked Witch of the East, and all the classic Oz characters... but the story isn't going as planned. Find out what happens in this twist on the tale.

Valentina Salazar is Not a Monster Hunter

When a mythical egg surfaces in a viral video at her new school, Val convinces her reluctant monster-hunting siblings to help her find the egg before it hatches and wreaks havoc. But she has some competition: the dreaded monster hunters who'll stop at nothing to destroy the creature . . . and the Salazar family.

For Teens Who Want to Creep It Real 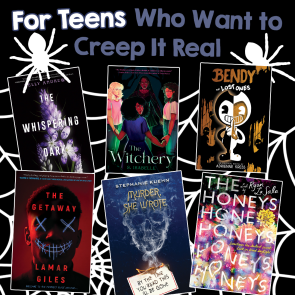 When Mars' sister Caroline dies under horrific circumstances, Mars is propelled to learn all he can about Aspen Conservancy Summer Academy, where his sister attended camp. Mars seeks out his sister's old friends: a group of girls dubbed the Honeys, named for the beehives they maintain behind their cabin. They are beautiful and terrifying -- and Mars is certain they're connected to Caroline's death. Something is hunting him in broad daylight, toying with his mind. If Mars can't find it soon, it will eat him alive.

Haelsford, Florida, is a hellmouth. Or at least, that’s what Logan, a new witch struggling to control her powers, thinks when she arrives at Mesmortes Coven Academy. She is immediately taken under the wing of the infamous Red Three: Iris, a deathwitch, who wants nothing more than to break the town’s curse; Thalia, the talented greenwitch, on the run from her religious family and a past that still haunts her; and Jailah, one of the most extraordinary witches at the academy whose thirst for power may lead her down a dark path.

With the Haunting Season approaching, old dangers lie in wait, and the cost to break the curse may be greater than any witch or human could ever know...

Jay is living his best life at Karloff Country, one of the world’s most famous resorts. Life isn’t so great for the rest of the world, but when people come here to vacation, it’s to get away from all that. In order to deliver the top-notch customer service the wealthy clientele paid for, the employees will be at their total beck and call.

Karloff Country didn’t count on Jay and his crew--and just how far they’ll go to find out the truth and save themselves. But what’s more dangerous: the monster you know in your home or the unknown nightmare outside the walls?

By the Time You Read This I'll Be Gone (Murder, She Wrote #1)

A suspenseful, modern update of the classic mystery TV series (starring the late Angela Lansbury) that's perfect for fans of One of Us Is Lying, Sadie, and Gossip Girl.

Beatrice Fletcher is obsessed with unsolved murders in her small town of Cabot Cove, Maine like her great-aunt Jessica, the famous mystery writer. But when her best friend Jackson goes missing, this time the mystery is personal.

Delaney Meyers-Petrov is tired of being seen as fragile just because she's Deaf, but her first semester at a new school gets off to a rocky start as she faces professors who won't accommodate her disability, and a pretentious upperclassman fascinated by Delaney's unusual talents.

After a student turns up dead, Delaney and Colton, who died years ago, are forced to form a tenuous alliance, plummeting down a rabbit-hole of deeply buried university secrets.

What 1946 Atlantic City teens, Bill, Constance, and Brant, don’t know is that their desires for their lives will lead them all to a dark secret. Something inky just came to town in the form of a curious machine and a visit from a man named Joey Drew. When mysterious ink stains begin permeating their lives, will these teens investigate and risk it all in the process? And what of the monster lurking in the shadows?

For Crafty Kids Who Want To Have Skele-FUN 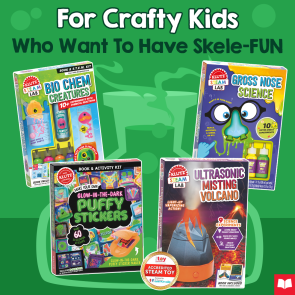 Find out about the slimy stuff that grows from your nose! Squeeze slimy snots through a soft and squishy nose! Explore ten different experiments on sinus-based anatomy, make sense of scents with the power of smell, and even whip up a batch of boogers! Learn how snot, mucus, and nose hairs protect your body. Use the fake sneezer to find the best ways to stop a sneeze or cough, and grow germs in a safe petri dish culture. Finally, try out soapy science activities to observe how germs can be eradicated.

Use electronics to build a functional misting volcano diorama!Connect together the electronics which use ultrasonic technology to turn water vapor into misty clouds that billow from a glowing volcano model. Learn about volcanology as well at circuitry and ultrasonic sound waves

Experiment with mysterious powders and slimy goo to form squishy biopolymers with cute faces!Create 6 custom gooey creatures in an aquatic terrarium. Pour neon gel that forms biopolymer blobs from the chemical reaction between sodium alginate and calcium chloride. 10 activities explore life cycles, adaptation, and traits that real animals use in the wild. Display your new friends in their very own specimen test tube habitat with custom stickers.

Make Your Own Glow-in-the-Dark Puffy Stickers