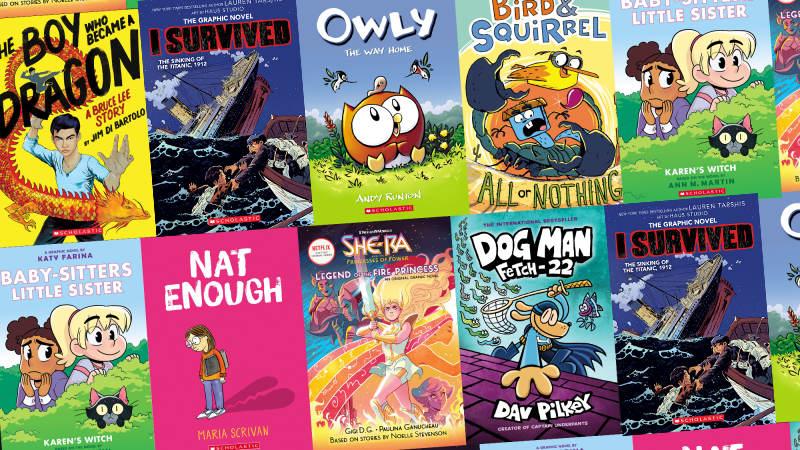 Take a look at some of the exciting, new graphic novels from our friends at Graphix hitting shelves in Spring 2020! Scroll down to see all the amazing covers!

Petey the Cat is out of jail, and he has a brand-new lease on life. While Petey's reevaluated what matters most, Li'l Petey is struggling to find the good in the world. Can Petey and Dog Man stop fighting like cats and dogs long enough to put their paws together and work as a team? They need each other now more than ever — Li'l Petey (and the world) is counting on them! Karen Brewer lives next door to Mrs. Porter, who wears long black robes and has wild gray hair. Mrs. Porter has a black cat named Midnight and always seems to be working in her garden. Karen isn't supposed to spy on her neighbor, but she's determined to prove that Mrs. Porter is a witch named Morbidda Destiny!

Mrs. Porter is getting ready to have a special meeting at her house, and Karen is sure the meeting is for witches. Are they going to cast a spell on Karen? Or will she be brave enough to send them away — once and for all? The Silver Eyes (Five Nights at Freddy's Graphic Novel #1) based on the novel by Scott Cawthon and Kira Breed-Wrisley, adapted and illustrated by Claudia Schröder

Ten years after the horrific murders at Freddy Fazbear's Pizza that ripped their town apart, Charlie — whose father owned the restaurant — and her childhood friends reunite on the anniversary of the tragedy and find themselves at the old pizza place which had been locked up and abandoned for years. After they discover a way inside, they realize that things are not as they used to be. The four adult-sized animatronic mascots that once entertained patrons have changed. They now have a dark secret... and a murderous agenda. Owly is a good-natured little owl, and he's always helping those around him. But despite his kindness, he seems to frighten would-be friends away before they even give him a chance, just because he's an owl. That all changes, though, once Owly meets Wormy. Like Owly, Wormy is in need of a good friend, too — someone who can be counted on for a helping hand, a good laugh, and a great adventure! I Survived the Sinking of the Titanic, 1912 (I Survived Graphic Novel #1) by Lauren Tarshis, adapted by Georgia Ball

Ten-year-old George Calder can't wait to explore every inch of the Titanic, even if his little sister, Phoebe, has to tag along. But when George sneaks away without her and ventures into the first class baggage room, a terrible boom shakes the entire boat. Suddenly, water is everywhere, and George's life changes forever... The Legend of the Fire Princess (She-Ra Graphic Novel #1) based on stories by by Noelle Stevenson, written by Gigi D.G., and illustrated by Paulina Ganucheau

Even after everything that's happened, the world outside the Horde's walls is still a strange one to Adora. Each day she's learning more about her growing powers as She-Ra, including something new: the ability to heal corrupted runestones. Runestones are the magical source from which princesses like Frosta, Mermista, and Perfuma draw their power, but Glimmer knows of another runestone — one with a dark past. Long ago a fire princess ruled the lands to the west, until her thirst for power corrupted her, and led to the ruin of her kingdom. Glimmer thinks the lost fire runestone could give the Rebellion an edge in the fight against the Horde, but claiming this ancient power won't be easy... especially not when the Horde has their eyes set on the same prize. The Boy Who Became a Dragon: A Biography of Bruce Lee by Jim Di Bartolo

Bruce Lee was born on November 27, 1940 — in both the hour and the year of the dragon. Almost immediately, he was plunged into conflict: as a child in Hong Kong as it was invaded and occupied by the Japanese; as the object of discrimination and bullying; and as a teenager grappling against the influence of gangs.

As the world knows, Lee found his salvation and calling through kung fu — first as a student, then as a teacher, and finally as a global star. Making friends isn't easy, but losing them is even harder! Natalie has never felt that she's enough — athletic enough, stylish enough, or talented enough. And on the first day of middle school, Natalie discovers that things are worse than she thought — now she's not even cool enough for her best friend, Lily! As Natalie tries to get her best friend back, she learns more about her true self and natural talents. If Natalie can focus on who she is rather than who she isn't, then she just might realize she's more than enough, just the way she is. Catwad and Blurmp are back and ready for more adventures in this newest volume in which they explore subjects like new friends, jealousy, allergies, and more! Squirrel helps Bird overcome his biggest challenge yet — FAMILY! The dangerous Horned Toad 500 cross-country race is coming up and Bird's father has always won it. But when his dad gets injured, Bird reluctantly joins the race to save the family honor. While dealing with the scorching desert heat and dirty tricks from another team, Bird and Squirrel are put to the ultimate test of endurance and sportsmanship. Along the way, the duo learns that, win or lose, having good friends and family will always get you to the finish line.