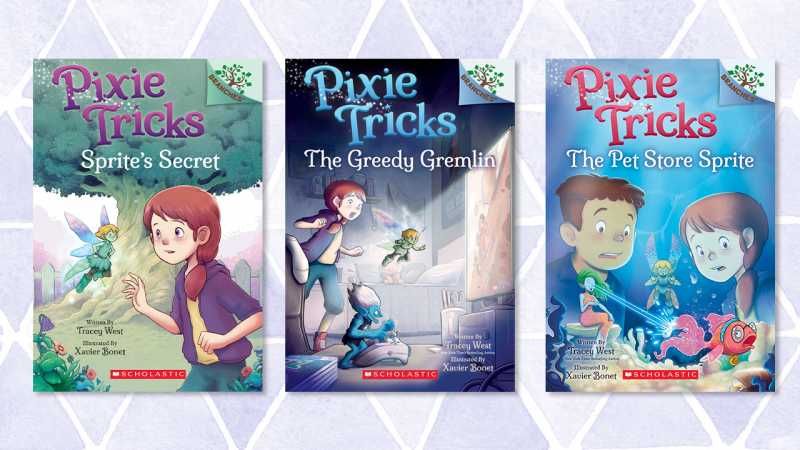 Five Things to Know About Pixie Tricks—Plus, a Pre-Order Giveaway!

Pixie Tricks is an early chapter book series for Scholastic Branches written by Tracey West, author of the New York bestselling series, Dragon Masters. In the mood to begin a new magical adventure? See below for five things you should know about the series!

Plus, we’re doing a pre-order giveaway for the third book, The Pet Store Sprite, which hits the shelves on May 18th!  Click here to learn more. 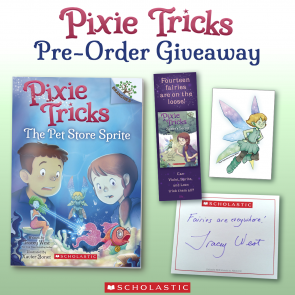 1. Fourteen Pixies Are on the Loose. These fairies escaped from the Otherworld, where fairies live. Now they’re in the human world, causing all kinds of trouble.

2. Not All Fairies Have Wings. The fairies in Pixie Tricks are based on creatures from folktales and myths. Some, like sprites, are cute and have wings. Others, like gremlins, are scary-looking. And some fairies even walk around the world, looking human.

5. The Author Loves Fairies. Tracey West has an entire bookcase filled with stories about fairies. She collects fairies, has a fairy garden, and sometimes dresses up like a garden gnome.

Tracey West has written more than 300 books for children and young adults, including the New York Times bestselling Dragon Masters series, the Pixie Tricks series, and the Hiro's Quest series. She has also appeared on the New York Times bestseller list as author of the Pokémon chapter book adaptations. Tracey lives with her family in New York State's western Catskills. She can be found on Twitter and Instagram at @TraceyWestBooks and on Facebook at @AuthorTraceyWest.

Eight-year-old Violet didn't expect to find a portal to the fairy world in her backyard. And she certainly didn't think she would have to defend the human world from trickster pixies! With the help of her new fairy friend Sprite, Violet sets out to catch Pix, a lively fairy who just wants everybody to have fun-all the time. Pix's playfulness starts to cause serious trouble, so it's up to Violet and Sprite to put an end to his fun and send him back to the fairy world!

For more about the pre-order giveaway for Pixie Tricks #3, click here.