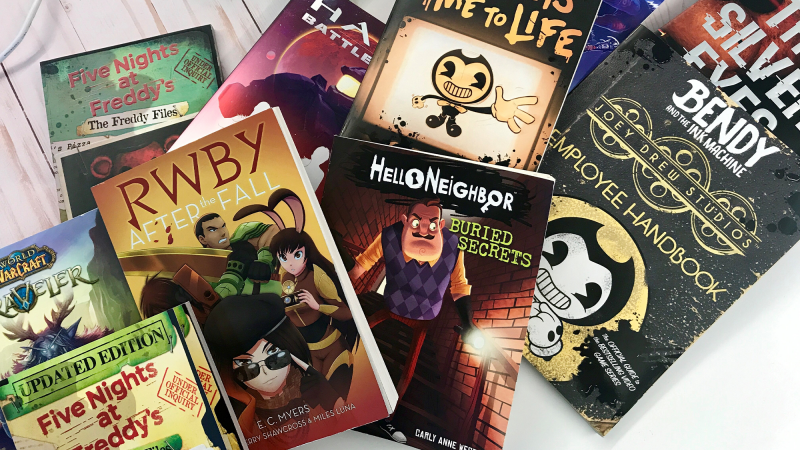 Do you know a reader who just can’t get enough of video games? Introduce them to these new releases under Scholastic’s AFK publishing line! (If you’re not a gamer, AFK is gamer-speak for ‘away from keyboard’!)

Scholastic’s AFK line offers books for all ages, and a story for every type of reader. Many AFK books are original, critically-acclaimed novels by award-winning authors and game developers, which add more complexity to already-expansive game universes. Others follow a guidebook format, which empower readers to dive deep into the details of their favorite games, and impart a few tips and tricks for playing!

Click here to learn more about all the AFK books available from Scholastic. Trouble is brewing…After Beacon Academy fell, Coco, Fox, Velvet, and Yatsuhashi made a vow: No one else is getting left behind. It's been more than a year since Team CFVY saw their school destroyed by the creatures of Grimm, their friends felled in battle or scattered across the world of Remnant. Since then, they've been settling into life at Shade Academy in Vacuo, fighting hard to finish their training so they can find their friends and save their world.

When a distress message comes into Shade, asking for huntsmen and huntresses to defend refugees from a never-ending stream of Grimm, Team CFVY answers the call without hesitation. But in the heat of the desert, they're forced to relive their former battles, both from the fall of Beacon and from everything that came before. Dreams Come to Life (Bendy and the Ink Machine, Book 1)

An all-new official, original novel from the twisted world of the hit horror video game, Bendy and the Ink Machine!

Seventeen-year-old Buddy has spent most of his life trying to escape the Lower East Side slums of New York City. Working as a delivery boy to support his family, Buddy wants to become an artist, a dream he's sure will never be realized. But that all changes when a delivery job puts him face-to-face with Mister Joey Drew, the eccentric owner of an animation studio.

Mister Drew takes Buddy under his wing as an apprentice, thrusting him into a world unlike anything Buddy has ever seen before. There's the colorful cast of the studio, from the cranky, yet driven composer Sammy Lawrence to Dot, the writing intern and Buddy's counterpart. Working for Mister Drew, Buddy starts to think that maybe it's really as simple as Mister Drew says: Dreams do come true. But not everything at the studio is as picture-perfect as it seems . . .

Something is going bump in the night at Joey Drew Studios, something that leaves behind trails of thick, dark ink. While the studio frantically works toward their latest deadline, Buddy and Dot team up to find out just what is tormenting the studio after-hours, even if it means tracking the trail to Mister Drew himself. Don't miss the thrilling finale to the Hello Neighbor prequel trilogy, based on the hit video game from tinyBuild!

Nicky Roth should be happy--he's finally proven that his best friend, Aaron, and Aaron's younger sister, Mya, are missing. Better yet, the police are actually doing something: they've plastered the town with missing posters, and have organized weekend search parties for the kids. But Nicky can't seem to pry his eyes from the house across the street, especially after he sees a frantic SOS coming from Aaron's room in the Peterson house. After what happened in the winter, and the warnings they got from their parents, Nicky's friends insist they can't help him investigate his neighbor anymore. If Nicky wants to find out what's going on in the Peterson house, he's going to have to do it alone.

Don't miss the electrifying conclusion to the Hello Neighbor official prequel trilogy, which includes two-color illustrations throughout to help readers unwind the mystery at the heart of the game. The bestselling, official guidebook to Five Nights at Freddy's is back, now updated and including 64 pages of new content exploring Freddy Fazbear's Pizzeria Simulator and Ultimate Custom Night!

In this official guidebook to Five Night at Freddy's, fans and gamers alike can immerse themselves in the series' mythology, gameplay, and secrets as we unwind the twisted mysteries hidden at the heart of Freddy Fazbear's Pizza. Delving into each game, players can map the animatronics' paths, learn how timed elements of the games work, and discover how to trigger unique events. Special sections throughout highlight Freddy's fans' most talked-about theories, from the identities of the "Bite of '83 and '87" victims to the history of Henry and William Afton to the recurring hallucinations of "it's me." All the evidence, along with every detail of the games, books, and more, is laid out for fans to explore in this one-of-a-kind guide to the warped world of Five Nights at Freddy's. Unlock the mysteries of the hit horror video game Bendy and the Ink Machine in this terrifying, in-world guidebook!

Dreams do come true at Joey Drew Studios! Welcome to Joey Drew Studios! As a new animator, it's your job to carry on Mr. Drew's legacy of iconic characters like Bendy, Boris the Wolf, and Alice Angel! In this handy guidebook, you'll learn how to get around the studio, operate our state-of-the-art Ink Machine, and work well with our dedicated staff of creatives and crew members. Mr. Drew himself has even included a walk-through of all the tasks you'll need to complete to make it out of your first week alive, as well as an excerpt from his memoir The Illusion of Living, to inspire you to carry our company mission forward.

In time, we hope you'll find a home here at our studios. Who knows? After a while, you may never want to leave!

Don't miss this terrifying in-world guidebook, your key to unlocking the mysteries of Bendy and the Ink Machine!