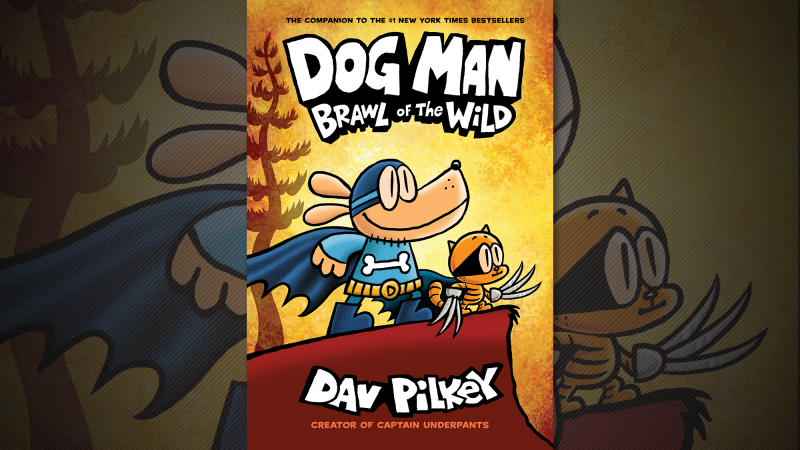 Calling all Dog Man and Dav Pilkey fans: We have some supa epic news about the beloved graphic novel series!

Today, we announced a 5 million copy first printing for Dog Man: Brawl of the Wild, the newest book in the blockbuster bestselling series by Dav Pilkey. The book will be published simultaneously in the U.S., Canada, U.K., New Zealand, and Australia on December 24, 2018.

We also announced that the next book, Dog Man: For Whom the Ball Rolls, the seventh installment in the hit graphic novel series, will be released with a strict on-sale date of August 13, 2019.

And check out the just-revealed cover! Launched just over two years ago under Scholastic’s Graphix imprint, the meteoric popularity of the Dog Man series by Captain Underpants creator Dav Pilkey continues to rise to epic levels. Dog Man: Lord of the Fleas, the most recent book in the series released on August 28, 2018 with a 3 million copy first printing, dominated both adult and children’s bestseller lists, and debuted at #1 overall on the New York Times, USA Today, Wall Street Journal, and Publishers Weekly bestseller lists. The Dog Man series has been translated to more than 23 languages to date.

“I wrote the Dog Man books for the kid I used to be—someone who wanted to do well in school but struggled with reading. I remember feeling like a misfit and an outsider a lot of times and I’m grateful to my parents who believed in me when it was hard to believe in myself. Their support and encouragement set me on a path to becoming an author and artist,” said Dav Pilkey, who received a Caldecott Honor for his picture book The Paperboy. “Meeting readers while on tour has been the most rewarding and humbling experience. It inspires me to continue to write and illustrate books.”

Watch a video clip of some of the highlights from the tour:

Be sure to pre-order your copy of Dog Man: Brawl of the Wild today!