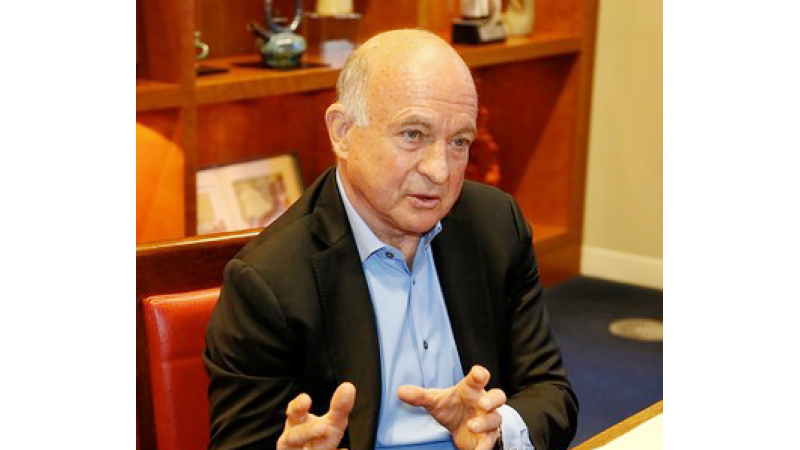 Our President & CEO Dick Robinson was recently featured in The Wall Street Journal's "Boss Talk" to discuss Scholastic's focus on educational technology and the importance of books and reading in the Common Core era.

You can watch a portion of interview here, and we've included excerpts below! You can also view the piece online here.

WSJ: Why is Scholastic, which was once in the textbook business, now betting heavily on education technology?

Mr. Robinson: We exited textbooks in year 2000 because the textbook business was very much a commodity business.

What we can do today is help you adapt to Common Core standards with services that you can use to move your kids from here to there. It's a different model than what has happened before in education. And it's a model that will have a much bigger impact on the way children learn and the way that schools perform.

WSJ: Can a content and distribution provider such as Scholastic succeed on its own, or does it need a technology partner with greater engineering prowess?

Mr. Robinson: We have any technology we want available to us. We know all the people in the business, and we know what services they offer. But what the schools need is something that works in the classroom, which is our capability.

Yes it's about content, but it's also knowing how to teach something, and how to interest kids. The technology itself is only a tool.

WSJ: Earlier this year Pearson PLC merged its Penguin Group consumer publishing arm with Random House to focus on digital learning and education services. Have you considered a similar move away from trade publishing?

Mr. Robinson: Pearson [was mostly] an educational publishing company. ... It made perfect sense. But we're also a distribution company with outreach. We sell book to parents primarily through clubs and fairs, and it's a more stable business than people think. It's not advertising based, and it's not getting rapidly disintermediated by digital books.

We don't need to exit trade publishing. We've got some good things coming up, and we've had a pretty good track record. We're good at that in part because we are sellers as well as content providers. We get sales reports every day with thousands of different books from all publishers. We know what kids want, which is often different from what bookstores want or what librarians want.

WSJ: How are you going to grow revenue, which took a big hit in the recent fiscal year in part because of slowing unit sales of the "Hunger Games" trilogy?

Mr. Robinson: Common Core will give a boost to the business. Teachers and parents want their kids to do better, and reading more is one of the most foolproof ways of doing that.

WSJ: You've got about 125,000 book fairs a year. Will the growth in digital reading mark the end of the fair business?

Mr. Robinson: I'm optimistic about the book fair experience. The reason is that it's not only about reading. It's also about communities coming together. Sometimes the fairs are connected to parent visiting night. It's a way for people to get together and show support for their schools. And the schools make money from it.

WSJ: What will Scholastic look like in five years?

Mr. Robinson: We'll get a larger share of the education business. The money is already there. We'll be asked to do more with staff development, and with our technology programs. That's also the part of the business that investors are most interested in. They aren't so sure about the consumer book business, so they give us a modest multiple on that. But on the education side, they see secular change.

WSJ: Do you plan to be like your father, who remained chairman until he died in 1982?

Mr. Robinson: My dad worked until he was 86. He reluctantly made me chief executive in 1975. He sent notes on the day before he died telling me what I should be doing. But I don't plan to do that.

WSJ: Have you chosen a successor?

Mr. Robinson: I have lots of good people in the company. I haven't anointed one … but as I give more responsibility to people, that meets everybody's goal.