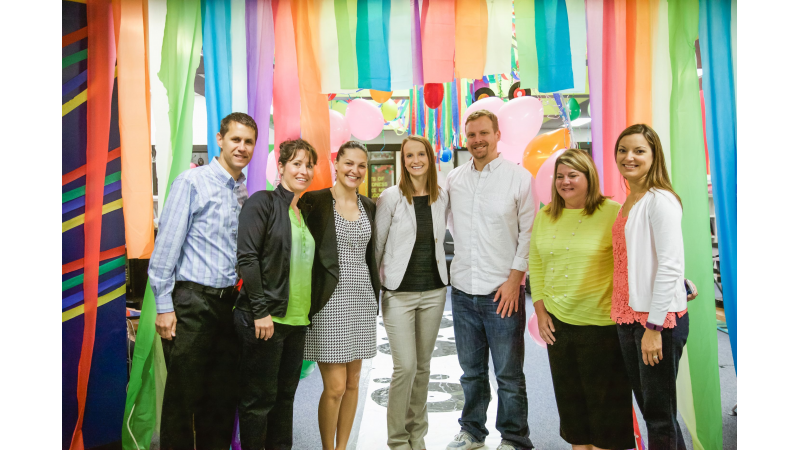 Throughout the week of the book fair, students were given the opportunity to enter a “Disinfection Station,” where they were showered with redeemable “Monster Bucks” in exchange for a donation to All for Books, a school community program that earns additional books for the school and gives back to community organizations. The proceeds from this event were used to purchase books for the local Good Samaritan Center. And at a special family night event, visitors dined on eye-popping monster treats, played scream tank bowling, and shopped for books at the fair.

On the day of his visit, author Dan Poblocki was greeted at the front of the school by a huge banner, balloons and excited, cheering students. He told us it was one of the best greetings he had ever received. The morning began with a reception, and all fifty eager Student Crew members lined up with certificates, notebooks and copies of Dan’s books to get autographs, group photos and selfies. While the additional 600 Excelsior Springs students assembled for Dan’s presentation, a DJ played songs that everyone got into in a big way. A spontaneous group dance to Cotton-Eyed Joe ensued, which drew even media specialist Kathy Travis and Dan into the mix.

Dan’s presentation included asking the assembled students to share paranormal activities they had experienced. He explained how a move with his family from Rhode Island to New Jersey when he was eleven shaped his future as an author: the house he lived in hosted a resident ghost! Dan and his siblings experienced unexplainable loud noises, snarling and growling, and an eyeball that peered at them through cracks in a door. Spooky, unnerving stuff! The assembly also explored why readers enjoy reading scary books.
The students, obviously intrigued by Dan’s real-life stories, asked follow-up paranormal activities questions during the question-and-answer period. A casual lunch with the Crew followed Dan’s presentation. Naturally, most of the conversations during lunch continued to center on additional ghost stories. Dan ended the luncheon with a scary story about hiding in his sister’s bedroom to pull a prank on her. He pulled the covers over his head and waited for her to come into the room. He heard footsteps walk over to him and felt something hovering over his face, breathing hard as if out of breath. He thought it was his sister so he threw down the covers and yelled BOO! But there was no one there. His sister was still in the other room!

In addition to all of the scary fun that was enjoyed by the entire student body, the Student Crew achieved its primary mission: promoting the importance of reading. Plus, they even increased their book sales compared to the school’s previous book fair! As a reward for reaching their goal, Crew Members earned the privilege and pleasure of “sliming” 13 Excelsior Springs teachers who volunteered for the cause.

The goal of every Scholastic Book Fairs National Middle School Crew Contest is to provide access to award-winning, popular books to more kids and to engage students and parents in Book Fairs to promote the love of reading. Winning schools also get $2,000 in books and merchandise from Scholastic.

Thanks to Dan Poblocki for the awesome visit, and congratulations again to Excelsior Springs Middle School!