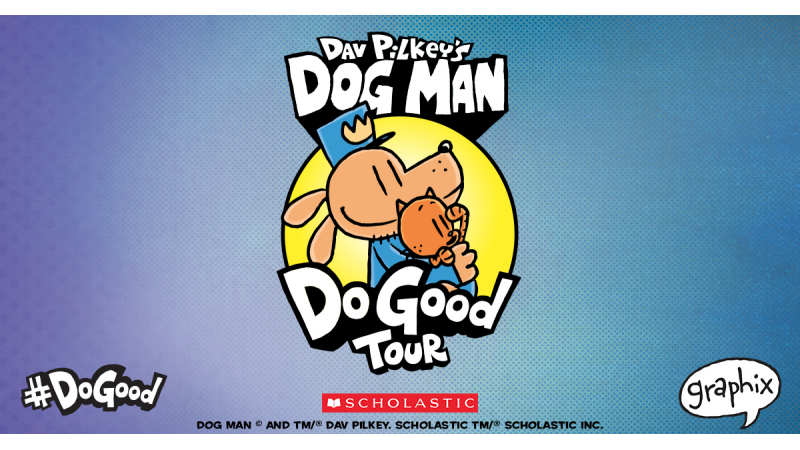 We're thrilled to announce the launch of “Do Good,” a campaign to encourage readers of all ages to give back and make a positive impact in their communities.

Inspired by the characters and themes in the worldwide bestselling Dog Man series by Dav Pilkey, highlights from the initiative include a transcontinental book tour featuring events with a charitable component in multiple cities across the U.S. and Asia, where Dav Pilkey will be appearing at arenas, military bases, ballparks, theaters, schools, libraries, book fairs and festivals—including being a featured author at the China Shanghai International Children’s Book Fair (CCBF).

Summer 2019 kicks off an exciting year for Dav Pilkey and Dog Man, including the following noteworthy events:

Starting in August and continuing throughout the fall, Dav Pilkey’s “Do Good Tour” will bring together kids, families, and educators, to highlight the many ways books inspire—and how each individual can help others make a positive difference wherever they are. Hosted by bookstores and key community partners, all of the events will have a "do good" component to support non-profit literacy organizations, local charities, military families, schools as well as libraries in underserved areas. The "Do Good Tour” will officially kick-off at the Mississippi Book Festivalin Jackson, Mississippi on August 17.

While in Mississippi, Dav Pilkey will make an appearance before thousands of school children from Title 1 schools. The tour will continue in St. Louis, Missouri at the Chaifetz Arena on August 18.

Additional U.S. tour markets will be announced via Scholastic’s social media platforms throughout the summer, so be sure you're following us on Instagram, Facebook, and Twitter! In addition to getting the opportunity to meet Dav Pilkey and hearing his inspiring story as a kid who struggled with ADHD and dyslexia, attendees at each family-friendly event will be treated to fun activities including photo opportunities with Dog Man and Captain Underpants costumed characters, signed books, giveaways, and more.

Following the U.S. tour, Dav Pilkey will appear at the China Shanghai International Children’s Book Fair (CCBF), with additional stops in Hong Kong and Mumbai in November, and visits to Australia and Canada in 2020. For more information and details about the “Do Good” tour, visit www.scholastic.com/davpilkey.

Dav Pilkey’s wildly popular Dog Man series explores universal themes and positive messages including empathy, compassion, kindness, persistence, and being true to one’s self. The next installment in the series, Dog Man: For Whom the Ball Rolls, delves into the importance of not just being good but doing good, and will be published simultaneously in the U.S., Canada, UK and Ireland, Australia, New Zealand, and across Asia on August 13, 2019. The series continues with Dog Man: Fetch-22 to be released on December 10, 2019.

The expansion of the Dog Man brand continues with the world premiere of Dog Man: The Musical from TheaterWorksUSA which debuted at the Lucille Lortel Theater in New York City on June 28 and will run through August 4.

The musical will tour across North America starting in Fall 2019 and continue through 2020. TheaterWorksUSA, which has been a not-for-profit leader in producing theater for young and family audiences for over half a century, continues its legacy of doing good by providing more than 5,000 free tickets to New York City youth during the premiere run and offering subsidized tickets to communities in need throughout the tour. For more information about Dog Man: The Musical and its mission to reach underserved communities with exceptional theater, visit www.twusa.org.

“Do Good” for Educators:

Scholastic, will partner with the American Library Association and ALA Graphics, also announced that the ALA READ poster and bookmark featuring original Dog Man artwork by Dav Pilkey with the message, “Be a Reading Supa-Buddy. Do Good,” will be available through the ALA store starting this month. As an added resource for educators, parents, and fans of Dav Pilkey’s books, Scholastic will launch adedicated website, www.scholastic.com/davpilkey, an online hub that will provide access to free downloadable classroom activities, tour information, learn and share ideas on how students around the world are making a positive impact in their communities.