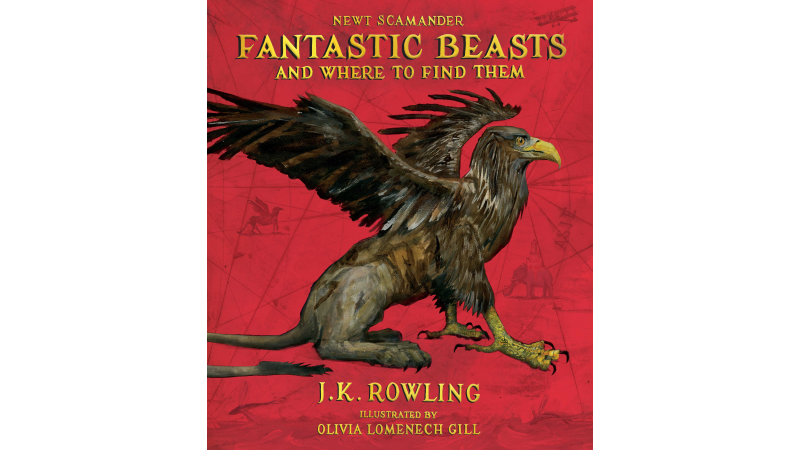 Cover reveal: Illustrated Edition of Newt Scamander's Fantastic Beasts and Where to Find Them Illustrated by fine artist Olivia Lomenech Gill, the cover of the illustrated edition of Newt Scamander's Fantastic Beasts and Where to Find Them by J.K. Rowling has been revealed!

The book cover features the griffin, a beast with the head and front legs of a giant eagle, and the body and hind legs of a lion. Publishing on November 7, 2017, this glorious new color edition of the updated Hogwarts library classic features an extraordinary array of magical creatures. The artist is a Kate Greenaway Medal shortlisted artist and has illustrated every beast from Acromantula to Yeti, using a variety of techniques, including prints and etchings, watercolor, and charcoal sketches.

Based on the textbook, the 2016 film "Fantastic Beasts and Where to Find Them" took viewers to a new era of J.K. Rowling’s Wizarding World, decades before Harry Potter and half a world away. Oscar winner Eddie Redmayne stars in the central role of wizarding world Magizoologist Newt Scamander, under the direction of David Yates, who helmed the last four Harry Potter features. The film also marked the screenwriting debut of J.K. Rowling.

For every sale of this book, Scholastic will donate 10% of the suggested retail price to two charities selected by the author J.K. Rowling: Comic Relief, a UK-based charity that strives to create a just world, free from poverty, and Lumos, a charity founded by J.K. Rowling that works to end the institutionalization of children.