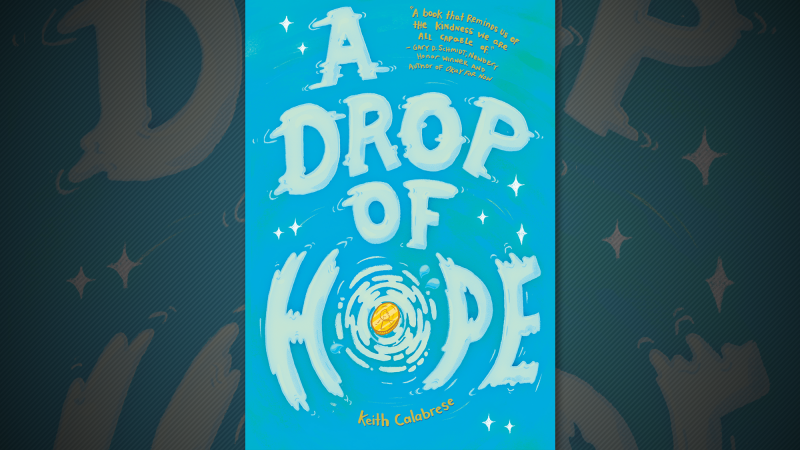 A Drop of Hope is an extraordinary story for kids 8-12 about how powerful an act of kindness, a hint of magic, and a little hope can be. In the book, times are tough and miracles are in short supply, but something strange is starting to happen. An old well has suddenly, impossibly, begun to grant wishes. And three sixth graders are the only ones who know why. As more wishes are made, the well's true secret gets harder and harder to keep. This unpredictable story will leave kids feeling like they too can spread hope.

We spoke with author Keith Calabrese about this debut novel for young readers. See our conversation below and pick up your copy of A Drop of Hope today!

What inspired you to write A Drop of Hope?

I always wanted to write a story about my hometown. I was a lucky kid in a lot of ways, but I knew other kids who weren’t always so lucky. Some of these kids became lifelong friends. I remember learning at a young age how a small act of kindness can change everything, can get someone through a tough time, forge a new friendship, inspire someone to believe in themselves. I think I’ve been waiting to write this story ever since.

Which character’s point-of-view was the easiest to write?

Ryan’s. Whenever I wrote in his point-of-view, it was like his voice just took over. Writing him was almost like dictation. Unfortunately, I also heard Ryan’s voice whenever something I was writing wasn’t working. He was the one who always told me what I needed to fix. So while he was the easiest character to write, he was also my toughest critic.

Which character’s point-of-view was the hardest to write?

I would have to say Tommy Bricks. His voice came pretty naturally to me as well, but a lot of the scenes in his point-of-view really wrecked me—especially as I kept getting closer and closer to the scene where we finally meet his dad. That scene was really hard to write.

Have you experienced any moments of hope yet that have come to light because of this story?

Actually, I just found out about an elementary school teacher who read an advanced copy of A Drop of Hope and wanted to get classroom copies, so he and his students could all read it together. His school couldn’t afford it, though, so this teacher held an online fundraiser and got the money for the books in less than two days!

What was the biggest challenge you faced writing this book?

Well, it was my first novel, so believing that I could finish it and not give up was a challenge, for sure. But as far as the writing part went, it was really hard to make sure all the little pieces of the story fit together like a big puzzle (maybe because I’m pretty rotten at puzzles). I had little notecards scattered everywhere around the house to help me keep things straight; I still find some here and there, and half the time I can’t remember what they mean.

What is the last book you read that gave you hope?

The Magician’s Elephant by Kate DiCamillo. She’s one of my favorite writers; everything she writes gives me hope. In fact, Because of Winn-Dixie was a big inspiration when I decided to take a chance and start writing A Drop of Hope.

What do you hope kids will take away from this book?

That we’re all connected, and that this is a good thing. That it’s okay to make mistakes—it’s often the best way to learn. That even though choosing kindness can sometimes be hard, awkward, messy, and thankless, it’s always, always worth it. And it’s so much better than the alternative.