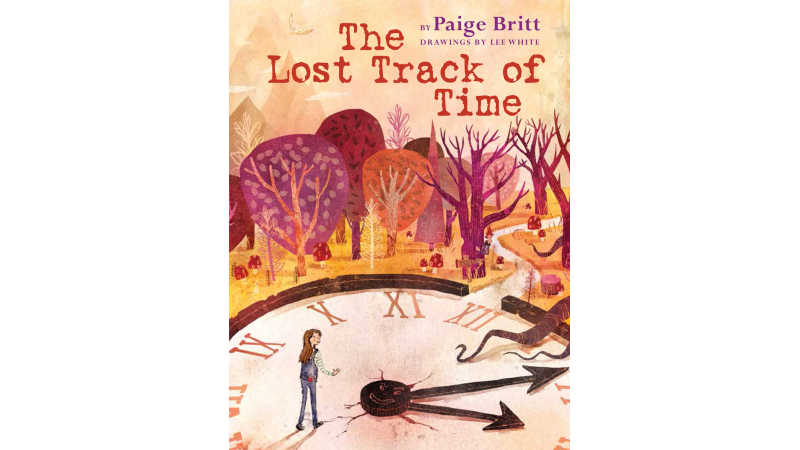 A Conversation with Executive Editor, Tracy Mack and Paige Britt, debut author of The Lost Track of Time Today, we have the pleasure of introducing you to debut author Paige Britt and her extraordinary book The Lost Track of Time. Executive editor, Tracy Mack, joins Paige to ask a few questions about the story, the process, and her childhood in this wonderful conversation.

TRACY: THE LOST TRACK OF TIME is not only a vividly imagined, wildly creative story, it is an exploration and celebration of creativity itself. Do you remember the very first hunch that grew into an idea that sparked the story?

PAIGE: Years ago, I took three months off to go on a meditation retreat. I’d been working at an Internet start-up and now found myself in the middle of nowhere with limited web access and nothing to do. At first I freaked out, but once my mind settled down, the silence and stillness around me took on the quality of a blank canvas bursting with creative possibilities. I began to draw and paint...to read and write...and to dream. One night, I woke from a dream where two people—a girl in overalls and a tall man with crazy red hair—were having a very animated and interesting conversation. Without bothering to turn on the light, I grabbed a notebook and jotted down their dialogue. And that’s how the story began.

PAIGE: You must have had a hunch, too, that the story in that early manuscript—which was a bit lumpy and from an unknown writer—was worth being told. What made you take the risk of acquiring it?

TRACY: Your effortless prose, whimsical wordplay, and timely and timeless topic drew me in immediately. I could tell you were a writer who cared about crafting sentences. And those sentences were not just superficially elegant; they were full of big, thought-provoking ideas. I was crazed with deadlines when the manuscript first came to me, struggling to balance work and marriage and motherhood. Reading your story, I felt as though you could see inside me, that you’d written it just for me, at a time when I so needed to hear its wisdom. I felt sure it would resonate with other overscheduled souls like me, kids and adults alike. TRACY: You’ve told me that the meditation retreat where The Lost Track of Time first began was important for you on many levels. Can you talk about what led you there? How has the experience affected your writing practice? What does your writing routine look like?

PAIGE: When I began writing The Lost Track of Time, I had such a stressful job that I walked around with a lump in my throat, constantly afraid I wouldn’t get everything done. I took the meditation retreat to catch my breath. But retreat is a misleading word. I quickly learned that sitting meditation is not about retreating from life—it’s about stopping and turning toward it. Turning toward my life meant turning toward that awful lump. That was the last thing I wanted to do! But I was miserable, and so I did. I would sit in silence each morning, and then write. To my surprise the lump eventually became the raw material of a story. The lump was about Worry Warts and Naughty Woulds and my fears of turning into a Clockworker. It was also about moodling and taking Flights of Fancy and doing absolutely nothing. Over time, the Impossible happened—the lump went away. So, you see, I wrote The Lost Track of Time, because I needed it! I still do. My daily practice includes both sitting and writing. It helps me stay connected to that space beyond my own doubts where the Impossible is Possible and being is just as important as doing.

TRACY: Can you talk a little bit about your childhood? I know you grew up without television. How did that affect the child you were and the adult you became?

PAIGE: I grew up with lots of unstructured time. We had twelve acres of land, with woods, a meadow, and a spring-fed creek. There was watercress and wild onions to eat; fish, lizards, and frogs to catch; hawks, owls, and foxes to watch. If I wasn’t outside playing, I was inside reading. Our house was full of books (we belonged to two children’s book clubs), and what we didn’t have on our shelves, we found at the library.

Without a television, I developed an attention span that was in keeping with the pace of life itself. I watched the world around me and if “nothing” was happening, I couldn’t change the channel. I had to engage that “nothing.” It was either that or be bored, and being bored was NOT an option. If all you have to play with is a pile of rocks, you have to engage your imagination. You build a fort and fill it with stick people and find some water to make a lake and so on and so on . . . The possibilities are endless. Luckily, my life was full of very interesting things, besides rock piles! To this day, the skills I developed as a child of being observant and creatively engaged are what I rely on as a writer.

About Paige Britt:
Paige Britt grew up in a small town with her nose in a book and her head in the clouds. She studied journalism in college and theology in graduate school, but never stopped reading children’s books for life’s most important lessons. Britt lives in Georgetown, Texas, with her husband. The Lost Track of Time is her first novel. Find her online at www.paigebritt.com.