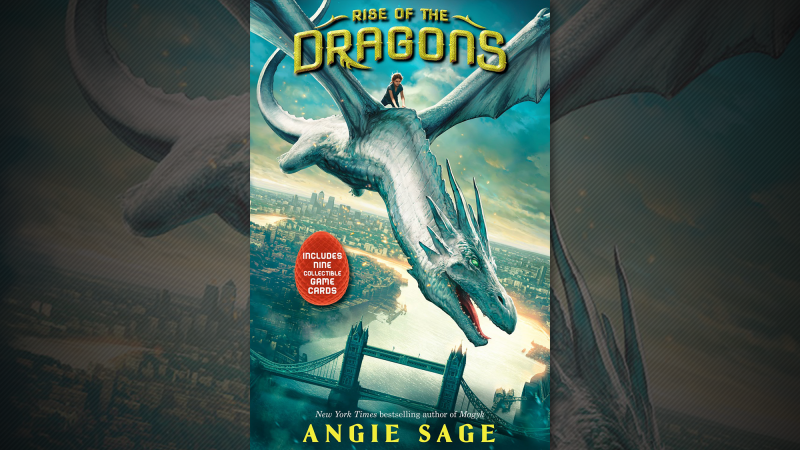 A conversation with Angie Sage about Rise of the Dragons

Rise of the Dragons is an epic adventure that imagines dragons in the modern world. The world was once full of dragons who lived in harmony with humans, but after a group of rogue dragons, the Raptors, tried to take over Earth, all dragons were banished to another realm. Most humans forgot about the dragons, claiming they never existed, but after two thousand years, dragons are returning to Earth…and not all of them have good intentions. Prepare for an action-packed battle between the dragons who want to protect the humans, and those who want to destroy them.

We were able to talk to mega bestselling author Angie Sage about this first book in a thrilling multi-author series. See our conversation below and pick up your copy of Rise of the Dragons today!

You currently live in the West of England where there are still stories of dragons being told! How did your location influence this story?

There are lots of dragon legends around here—I even did my art school thesis on Somerset Dragons. The legends stem from the raids of the Vikings who plundered these coasts in their dragon-headed boats in the seventh and eighth centuries. The West of England is a great place to live, and it does have a mysterious feel to it, so I guess some of that has crept into my writing.

Have you always enjoyed telling stories about dragons?

I’ve always found the idea of dragons fascinating, and they are great characters to have in any story. But it is more than that—there is something about these creatures that fascinates us all, and I do think it is strange how we humans seem to have a collective memory of dragons. I like to think that is because we really did once share our world with dragons.

The story jumps between two different realms. Which world was more challenging to write about?

They were both great to write. I love creating different worlds—or rather exploring them. I don’t usually write about our actual present day world, so I did wonder how I’d get on with that. To my surprise, I loved it. The scenes with Sirin in London are quite short as the focus in this book is on Joss and Allie, but they really drew me in.

Which character’s perspective was your favorite to write?

I always say that characters are like one’s children—you don’t have favorites! What I do enjoy writing are the interactions between characters, and I did particularly love writing about the dragons’ relationships with their Locked humans. I loved the relationship between Joss and Lysander, Allie and Bellacrux. And, surprisingly, I was also really touched by the bad guys’ bonds with their dragons, because this is where we get to see the Lennixes’ unexpected softer side. I found the tenderness between D’Mara and the ailing Krane very touching. And I loved that Decimus was the only creature Edward Lennix could talk to as an equal.

This book has a corresponding physical and digital trading card game. Did this affect how you wrote the story?

Yes. I needed to make each dragon very individual, so that readers would identify with the one they liked. That’s why there are four colors of dragons, each with its own characteristics and backstory. What makes Rise of the Dragons unique from all of the other books you’ve written?

Rise of the Dragons was a much more collaborative book than I have written, so that was new and very interesting. I do like developing ideas with others. The plan was that I would be the first author in a series, so I’d kick off the story and others would run with it. I really enjoyed setting up the world of the tyrannical Lennixes, getting to know Joss, Allie and Sirin—and many dragons too—then putting them together into a mix for the next author to take over. It felt a little bit like being the first runner in a relay race. I’m very much looking forward to seeing where the next author, Jessica Khoury, takes it.

Do you have any advice for aspiring fantasy writers?

The key is to find your world. Everything flows from that. This takes time and a lot of daydreaming! Once you have your world, then you can imagine yourself in it and think about whom you would encounter there. And then, once you get to know the people who live there, you will find your story begins.