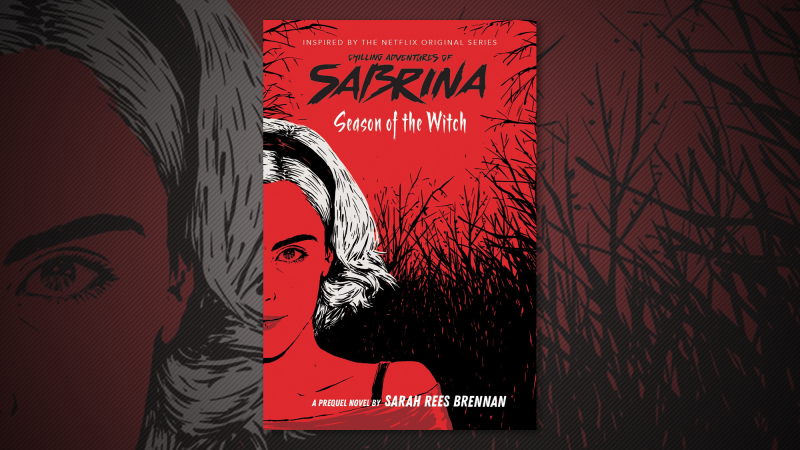 From the creator of Riverdale comes the Chilling Adventures of Sabrina, a new Netflix series based on the classic Archie comic series. This prequel YA novel from Sarah Rees Brennan tells an all-new, original story, perfect for readers ages 13 and up.

Start reading this thrilling novel with the chapter excerpt below (available in audio, too!)

Season of the Witch (The Chilling Adventures of Sabrina, Book 1)

It's the summer before her sixteenth birthday, and Sabrina Spellman knows her world is about to change. She's always studied magic and spells with her aunts, Hilda and Zelda. But she's also lived a normal mortal life — attending Baxter High, hanging out with her friends Susie and Roz, and going to the movies with her boyfriend, Harvey Kinkle.

Now time is running out on her everyday, normal world, and leaving behind Roz and Susie and Harvey is a lot harder than she thought it would be. Especially because Sabrina isn't sure how Harvey feels about her. Her cousin Ambrose suggests performing a spell to discover Harvey's true feelings. But when a mysterious wood spirit interferes, the spell backfires...in a big way.

Sabrina has always been attracted to the power of being a witch. But now she can't help wondering if that power is leading her down the wrong path. Will she choose to forsake the path of light and follow the path of night?

This exclusive prequel novel will reveal a side of Sabrina not seen on the new Netflix show. What choice will Sabrina make... and will it be the right one?

No matter what was going on with him, Harvey walked me home as usual. Unfortunately, that meant his eye was caught by the sight of girls in the woods. Again.

“Hey, ‘Brina,” said Harvey, nodding to the group beyond the trees. “Do you know them?”

There were three girls today. They all wore dresses with lace-frilled collars and cuffs and in dark materials, but with short skirts, like sexy Quakers. There was a boy with them, in dark clothes with dark hair, but I couldn’t see his face.

“I don’t think so,” I said, but I was lying. I recognized the girls, even from a distance. They were a group of three witches who already attended the Academy of Unseen Arts. We’ve had a few run-ins. Prudence, Dorcas, and Agatha are beautiful, powerful, and not very impressed with the idea of a half mortal attending their precious school. They take every opportunity to make clear that I’m inferior.

Now they were making me feel inferior without even seeing me. Without even trying.

I didn’t think I knew the boy. He was probably a mortal they were messing with. Prudence, Dorcas, and Agatha’s business was loyally serving Father Blackwood and Satan, and their pleasure was tormenting mortal men.

“Yeah,” said Harvey. “I haven’t seen them around either. They must be from out of town.”

“Are you going to be checking out other girls every day now?” I teased. “Couldn’t you have picked a more attractive hobby, like chess or collecting moths? I think collecting moths is very sexy.”

“I wasn’t checking them out,” Harvey claimed. “I’d never do that. It’s just that sometimes I do look at people from out of town, and I wonder what their lives are like. I think about how it would be, to leave Greendale myself, and have a totally different life. Do you ever think about that, Sabrina? Having your life utterly transformed?”

Harvey’s gaze was fixed on a far-off vista that nobody but him could see. In some ways, he was a magic maker as much as I was. My artist, my seer of visions who wants to commit his dreams to paper and show the world. He wasn’t looking at the witches in the woods, and he wasn’t looking at me.

When Harvey dreamed of far-off places, I wondered if he thought of me. Was I in his rearview mirror as he made his grand escape, part of the town and the life he was leaving behind?

As I watched the witches in the woods, the dark-haired boy turned, a green leaf beside his head caught fire under his gaze. The leaf became a glowing ember and then curled up into darkness. The ash drifted away on the breeze.

Well, well, well. Maybe the boy wasn’t a mortal they were messing with, after all. Warlocks were rarer than witches, but there was Ambrose and Father Blackwood and my father, of course. Now I’d seen a fourth. No doubt I’d meet plenty of them when I began attending the Academy of Unseen Arts.

I couldn’t let Harvey see witches doing magic in the woods. I caught hold of his hand and pulled him along.

When I reached home, I ran straight up the stairs and into my cousin’s bedroom without knocking.

Ambrose lifted his eyes from a worn copy of Oscar Wilde’s Salome and lifted his eyebrows along with them. “Sabrina, I might not have been decent. Not saying I’m decent now, in a moral sense, but at least I’m wearing pants.”

He was wearing silk pajama pants and a red velvet robe, so it wasn’t as if he was ready for an outing. If Ambrose ever had outings.

“Your pants don’t concern me, Ambrose! This is important.”

“Many people find the topic of my pants to be important and absorbing,” Ambrose claimed. He rolled off his bed, tying the gold-tasseled sash on his robe tighter and slipping a dried piece of deadly nightshade between the pages of his book.

I was still panting from my race home and up the stairs. I couldn’t seem to catch my breath, but I said the words anyway.

Ambrose lit up. “Fantastic! Are you up for a trip to the woods? We’re going to need a few special ingredients, since this is a very special spell. Cousin, did you get a sample of Harvey’s hair?”

Ambrose smiled. “Good. So we have Harvey’s hair, the candle, the rope, the lavender, the rosemary, and the coltsfoot, but we need myosotis. I hear it grows in the woods.”

The woods are deadly, dark, and deep. There were once witch trials in Greendale, as there were in Salem, though the Greendale horror was buried and lost to history. Witches died in the Greendale woods, and the hanging trees wait there.

I had never strayed off the woodland paths at night to college spell ingredients before, but maybe it was time I did. I should become one acquainted with the night.

I didn’t have much time before my life changed, and when it did, I had to be ready.

Prudence, Dorcas, and Agatha were always wandering through those woods. I belonged in those woods. In a few short weeks, I would be every bit as much a witch as they were.