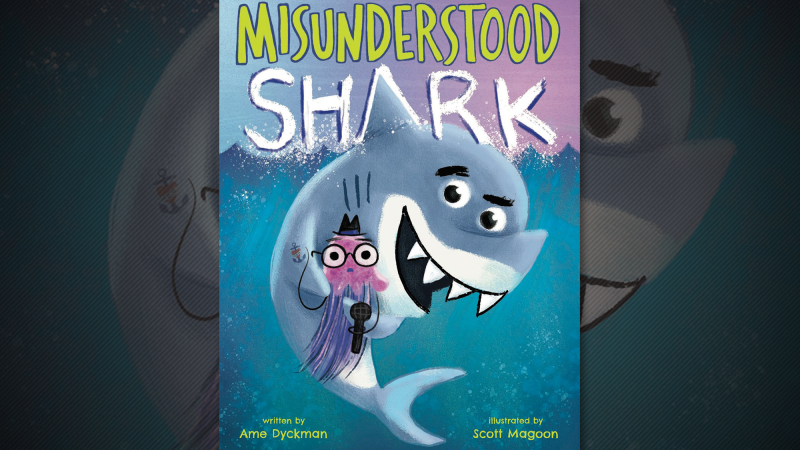 Celebrate Misunderstood Shark Week with us!

Of course, we plan to watch hours upon hours of shark-themed television, but we are also going to celebrate with one of our favorite shark picture books—Misunderstood Shark by New York Times bestsellers Ame Dyckman and Scott Magoon!

To celebrate #MisunderstoodSharkWeek with us, be sure to:

And, to kick off the week in a particularly JAWSdropping way, we asked Ame and Scott a few sharktastic questions and are giving you a chance to win a SIGNED copy of Misunderstood Shark. See below for their answers and for giveaway details, and have a SEAnsational #MisunderstoodSharkWeek!

Ame Dyckman: Since Shark is upstairs in my bathtub (again!), I can finally reveal that my favorite sea creature is actually the majestic sea cucumber—

—I mean, um, SHARK IS MY FAVORITE! (And he’s surprisingly quiet sometimes, too!)

Scott Magoon: I find whales AND sharks absolutely captivating—so I’ll split the difference and say that whale sharks are my favorite. Why? All kinds of reasons. They are the world’s biggest fish, and while they are not whales, they can grow to be as big as some small whales. An average adult whale shark is 32 feet long and weighs 9 tons. It eats by opening its HUGE mouth and swimming forward to push food and water into its mouth—or by sucking in water and prey by closing and opening its mouth—which has 350 rows of tiny teeth!

Scholastic: Be honest—are you afraid of sharks?

AD: I WAS afraid of sharks, until (true story!) I rode an inflatable raft THROUGH A SHARK TANK on vacation and didn’t get eaten, proving that sharks really ARE just misunderstood! (And that you should always pick “Truth” instead of “Dare!”)

SM: I think it depends on where I saw one. For instance, if I was snorkeling in deep water, turned around and saw a shark swimming toward me, I’d DEFINITELY be startled. Sharks—like so many wild animals—are worthy of our respect and admiration. But because they are misunderstood and live in the ocean with really sharp teeth, people—including myself—are fearful of them. Therefore, if I spent more time swimming in sharks’ environment, I think I would be less anxious about encountering one in the deep. I think?

AD: My VERY FAVORITE shark Fun Fact is included in our next MISUNDERSTOOD SHARK episode, so I probably can’t spill quite yet (except that it’s SUPER cool, SUPER GROSS, and SUPER lucky for Bob Jellyfish!), but my second-favorite shark Fun Fact is that great white sharks like heavy metal music because they can feel the thumping vibrations in the water! ROCK ON, SHARKS!

SM: Hammerhead Sharks can see in 360 degrees! That’s like seeing everywhere all the time. The only place they can’t see is directly above them or directly below their hammer-shaped head. Who needs virtual reality goggles when you’re a hammerhead!?

Click here for a chance to win a signed copy of Misunderstood Shark and here to read the full rules. The contest is open from July 29, 2018, through August 5, 2018. No purchase is necessary, and you must be a US resident eighteen or older to enter. Good luck!